Indian art tells a huge story in just one picture, some more than others. We look at seven famous works of art by Indian artists.

Sher-Gil's self-portrait is the first painting by her to be offered to Christie's London auction.

There are a few iconic works by Indian artists which have stood the test of time to take their place in art history.

Hundreds of paintings are created by immensely talented painters, capturing the attention of art enthusiasts.

Every bit of colour used acts as a word written on the canvas.

Indian artists have created masterpieces which have caught the eye.

Some have stood out more than others, therefore they have become very recognisable among art fanatics.

We look at seven of the most famous works of art by Indian painters. 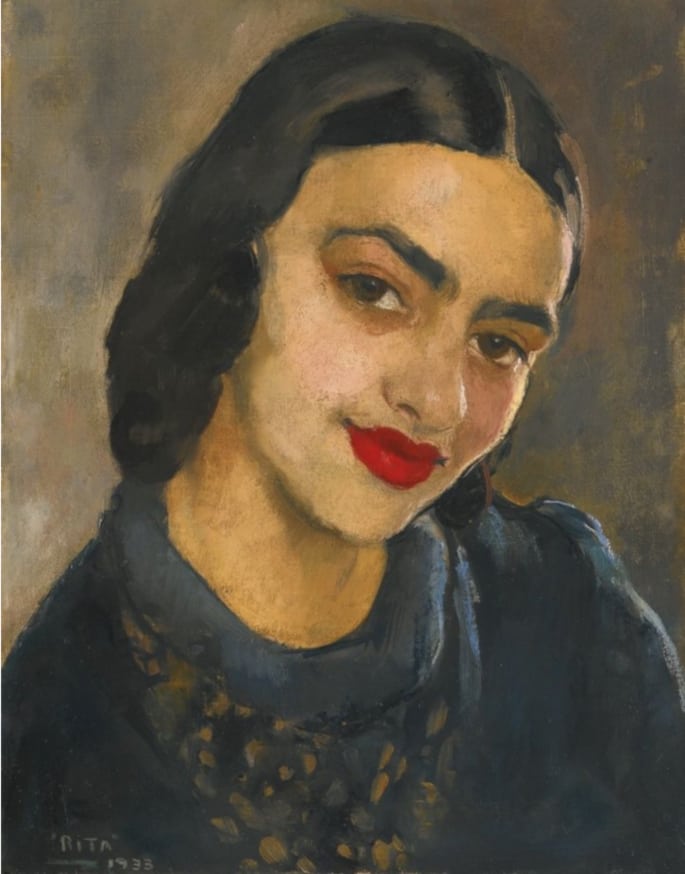 This is a self-portrait by Amrita Sher-Gil, which was created in 1931 while she was a teenager.

The painting has taken influence from her time spent in Europe and in India.

It is painted with an intensity and depth highlighting the focal point, her facial expression.

This draws the viewer into Sher-Gil’s innermost thoughts which in this painting is sadness.

Sher-Gil’s self-portrait is the first painting by her to be offered to Christie’s London auction.

Her painting is just one of many famous artworks which are eye-catching to the viewer. 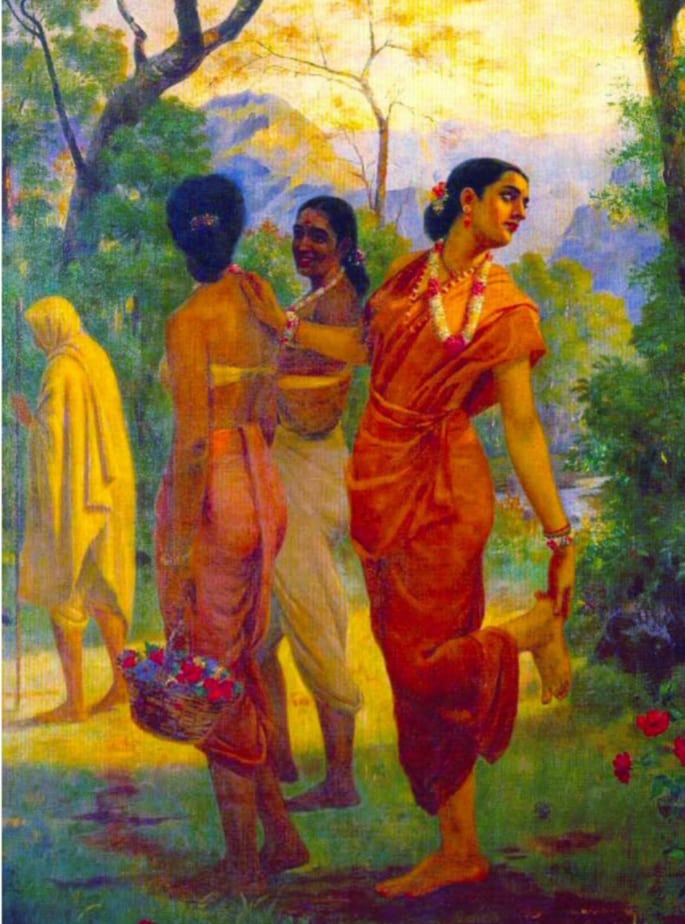 Shakuntala is a colourful painting by Indian painter Raja Ravi Varma, considered to be one of the greatest painters in Indian art history.

His works incorporate a fusion of European technique with Indian tradition.

The painting is of Shakuntala, a prominent character of Mahabaratha, one of the main Sanskrit stories of ancient India.

Shakuntala is pretending to remove a thorn from her foot, but she is actually looking for her lover, Dushyantha.

This is a piece which has become famous in Indian art history due to the ability to draw the viewer in.

“This very gesture draws the viewer into the narrative, inviting them to place this scene within an imagined sequence of images and events.”

“On its own, the painting is like a still from a moving film which has been plucked out from a spectacle of episodes.” 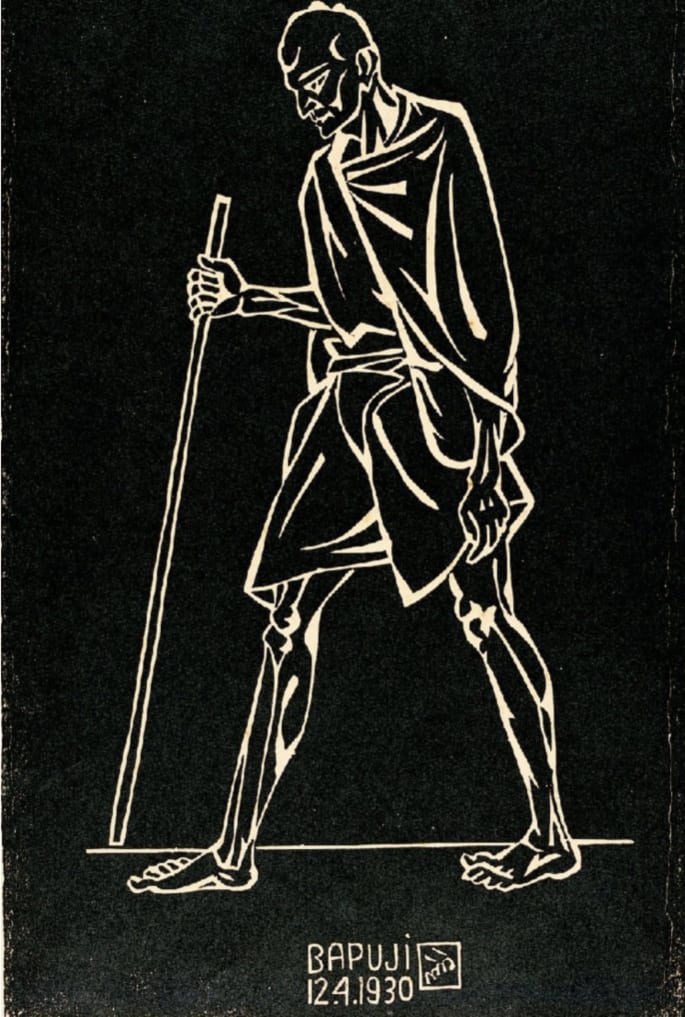 Bose stated that Gandhi was an inspiration for all artists, hence he created the famous art piece.

It was an act of civil disobedience to protest British rule in India, known as the British Salt Law.

Bose’s linocut portrait is titled ‘Dandi March’, as the march Gandhi led was from Sabarmati to Dandi.

It reflects the respect Bose has for Gandhi.

The image is on display at the National Gallery of Modern Art, located in Delhi.

Bapuji‘s place in Delhi’s art gallery reflects how famous the painting is and the recognition it should get. 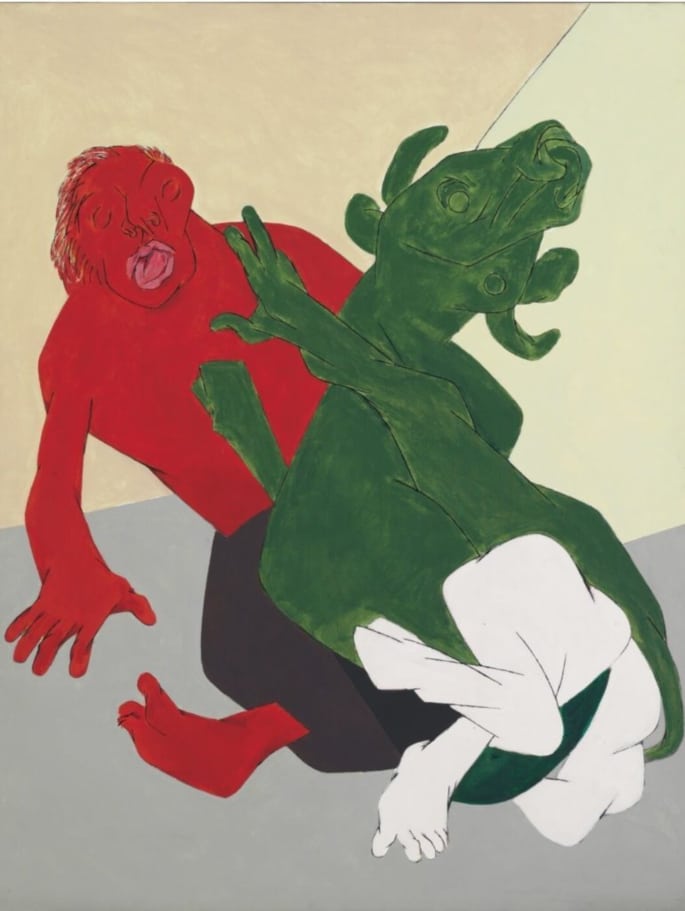 Tyeb Mehta is one of India’s most recognisable contemporary artists who embraced Modernism in his paintings.

He was part of the Bombay Progressive Artists’ Group, who are responsible for combining Indian art history with Western styles.

Mahishasura is arguably Mehta’s finest work of art. The painting is a reinterpretation of the buffalo demon in Indian mythology.

Mehta created the painting after visiting Santiniketan where he became inspired by the story of Mahishasura.

In the painting, Mehta combines ancient imagery in a simple form.

The colours and lines are basic, which is what enhances the painting’s quality. This results in powerful modern art, full of vitality.

Mahishasura is the first Indian painting to cross the million pound mark. It sold for £1.2 million (Rs. 12 Crores) at a Christie’s event in 2005. 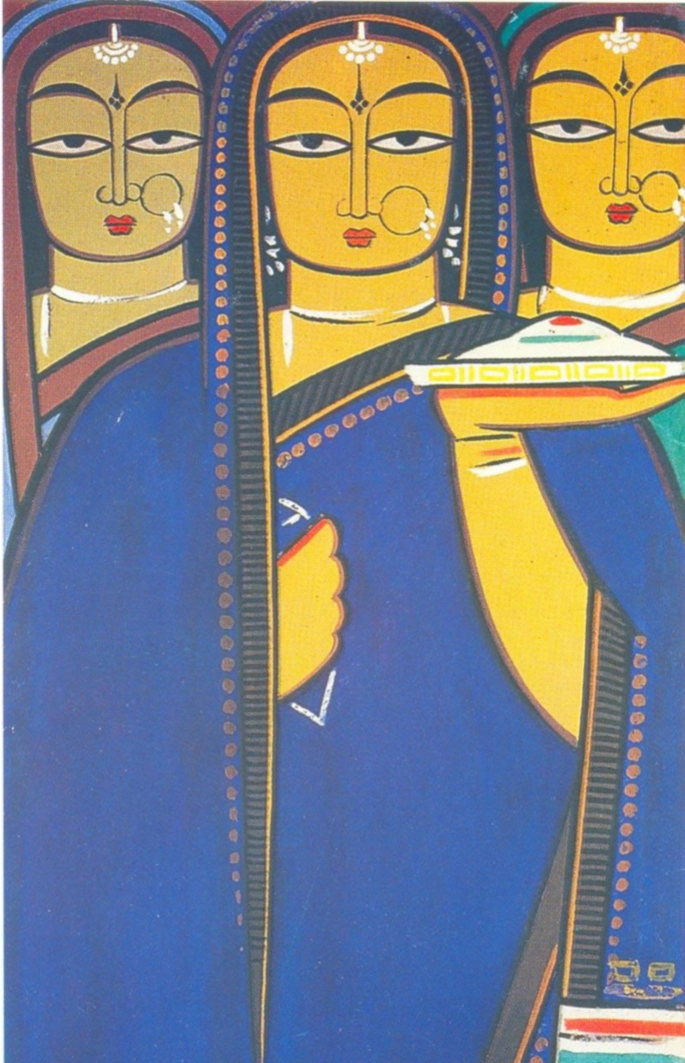 The Bengali artist is considered a pioneer of 20th Century modern Indian art.

Jamini Roy has a unique style based on Bengali folk traditions, where he changed from his academic Western training.

He learnt Western oil painting when he studied at the Government College of Art in Kolkata.

The Indian artist was most influenced by the Kalighat art form which features bold brush strokes.

This is seen in Three Pujarins as the lines are incredibly sharp and stand out in the painting.

Jamini Roy used vibrant colours to added his own individual style, this results in a visually appealing piece. 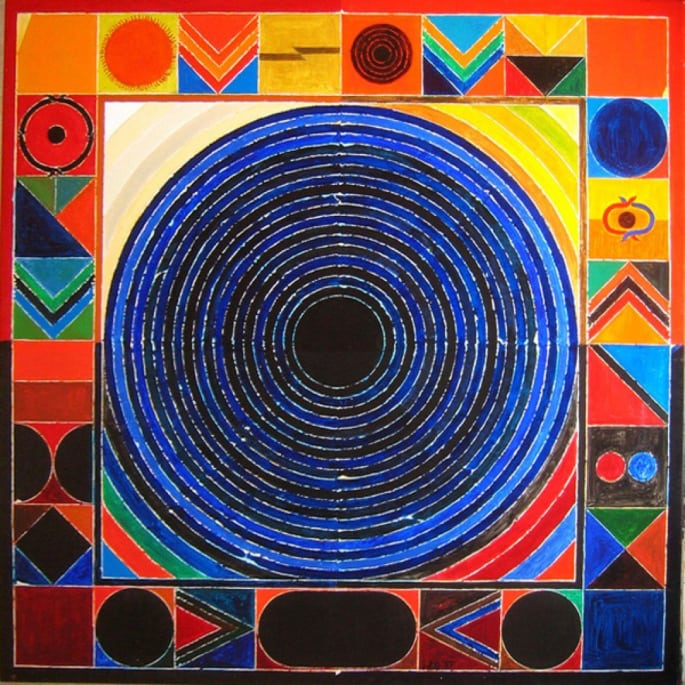 Syed Haider Raza is responsible for popularising Indian iconography around the world.

The Bindu (a point or the source of energy) is something which reinvented Raza’s painting vision.

It originated when his teacher told him to concentrate on a dot drawn on the blackboard when he was not concentrating.

This painting is no different and its dazzling colour is what has made his work famous in the art world. 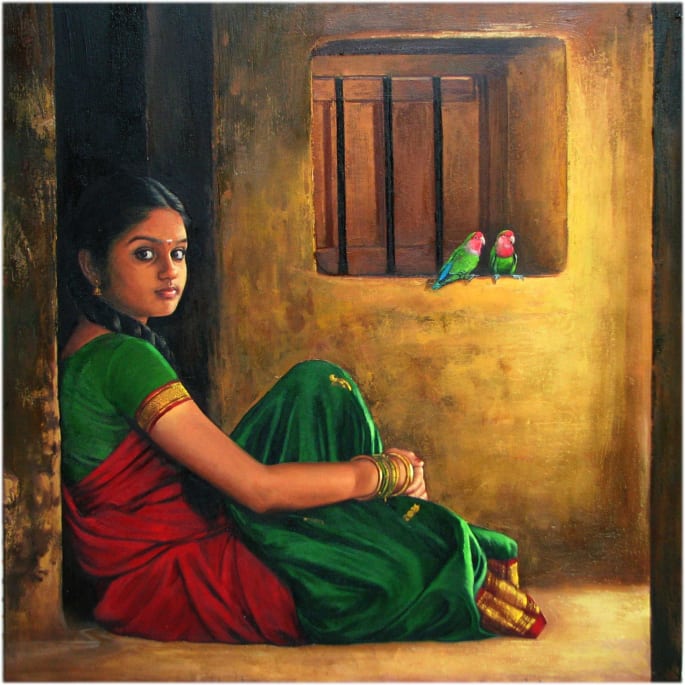 In his work, the lives and faces of his subjects are captured in detail, usually in everyday moments of life.

Innocent expressions and the delicate light in each painting enhance the realism, which is Elayaraja’s style.

In Tamil Girls with Her Parrots, the girl is sitting with her parrots and smiling subtly into the frame.

The attention for detail is expressed by Elayaraja as every fold in the girl’s dress is highlighted, breathing life into the painting.

Shining gold-threaded patterns is another detail which showcases his connection to his cultural background, in Tamil Nadu.

Indian artists are globally recognised for their unique works of art.

This selection of paintings are famous illustrations which represent Indian culture.

Each artist has painted their respective piece with inspiration from a variety of factors.

Some incorporate a unique painting style, whereas others take inspiration from the artist’s cultural background.