Ancient Indian folk art styles have been passed down generations and are still practiced in different parts of India. We explore 10 unique folk art forms.

Characterised by eye-catching geometrical patterns, this art form was unknown to the outside world.

Passed down from one generation to another, Indian folk art is still alive in many parts of the country.

Even though some folk art forms are centuries old, generations pass them down to preserve the culture of India.

All are culturally unique and varied. They have evolved over the years.

Some remain untouched despite modernisation of the country.

Others adapt to new paint colours and materials to keep up to date with society.

Most of the Indian folk art depict religious tales, an alternative way to view these stories that are popular within Indian culture.

All of them are unique, admirable and represent Indian culture in their own way.

In the olden days, these paintings were created using natural dyes and colours that were made of soil, mud, leaves and charcoal.

These colours were painted onto canvas or cloth, presenting a sense of vintage nostalgia.

As a result, these art forms have been passed down from one generation to another to educate them on the rich cultural history of India. 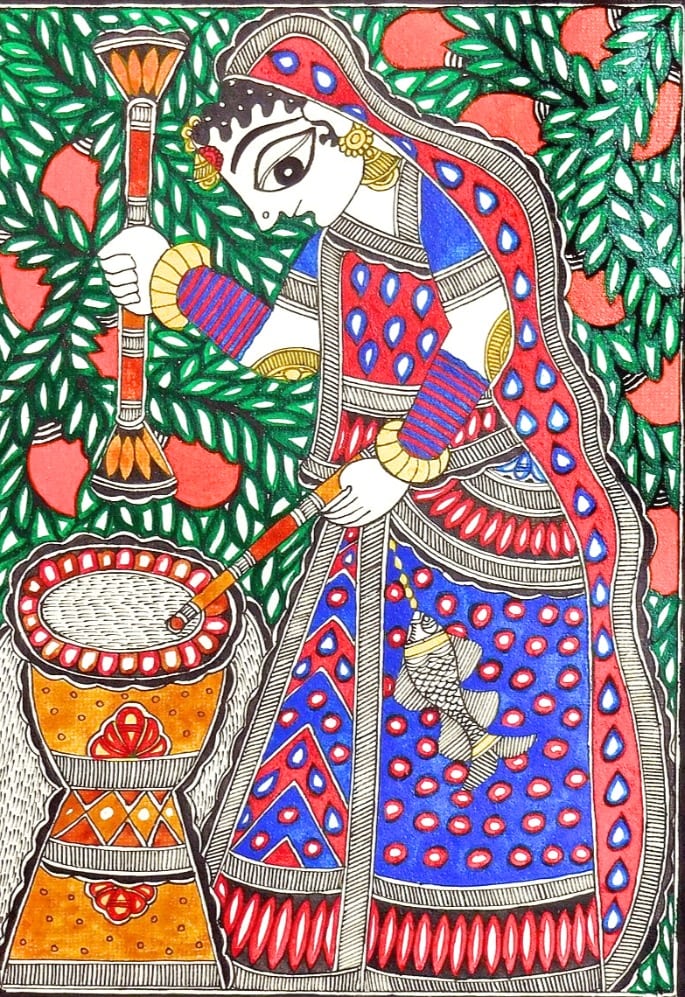 Madhubani, or Mithila art, originated in the Mithila region of Bihar in Nepal.

This folk art dates back 2,500 years ago to the time of Ramayana when King Janaka asked an artist to capture his daughter Sita’s wedding to Prince Rama.

It is one of the most popular Indian folk art forms, painted mostly by women who create awareness on issues such as education through their artistry.

Even to this day, these utensils are used with natural dyes and pigments.

Characterised by eye-catching geometrical patterns, this art form was unknown to the outside world.

This changed when the British discovered it in the aftermath of an earthquake during the 1930s.

Houses destroyed in the earthquake had the walls covered with Madhubani paintings.

Paintings by Picasso, Miro and Klee mirrored the Madhubani artwork.

This discovery bought the Indian folk art form into the public’s attention.

As a result, this enhanced the prominence of the art form, which is why it is still popular today as it was 2,500 years ago. 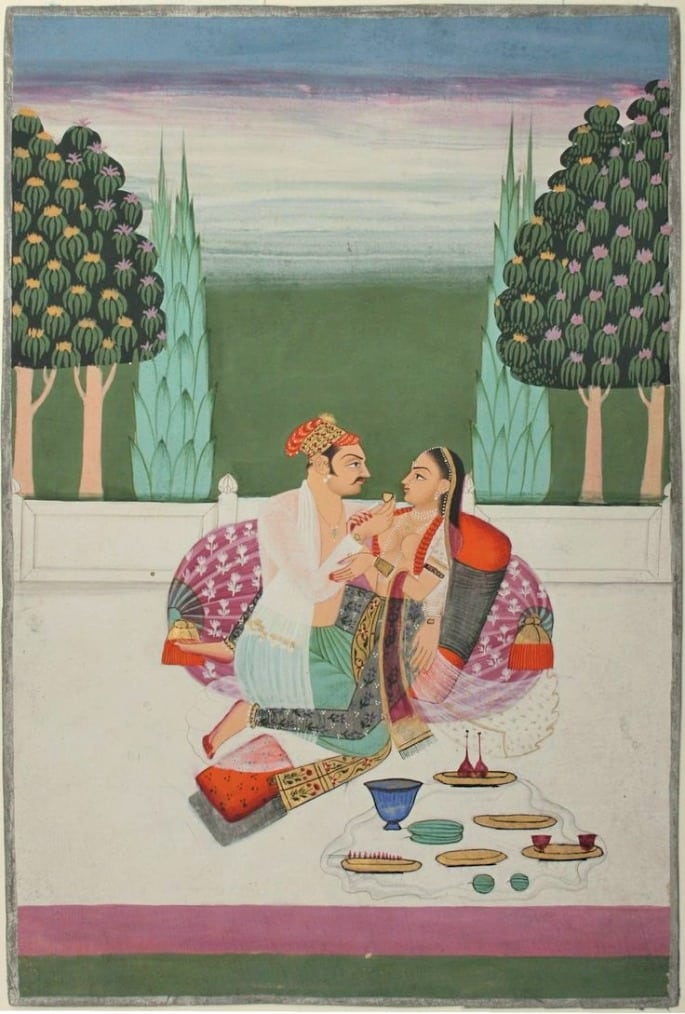 Indian miniature paintings originated in the Western Himalayas, during the Mughal era in the 16th century.

This art form highlights the intricate handmade details within a small sized painting. This gives them a unique identity.

They effectively promoted this art form.

Today, it is regularly practised in Rajasthan.

These paintings stand out because of the unique illustrations of humans.

They are always portrayed with large eyes, a pointed nose and a slim waist. Men are always depicted with a turban.

A small sized painting has a big impact especially when it is passed down generations. 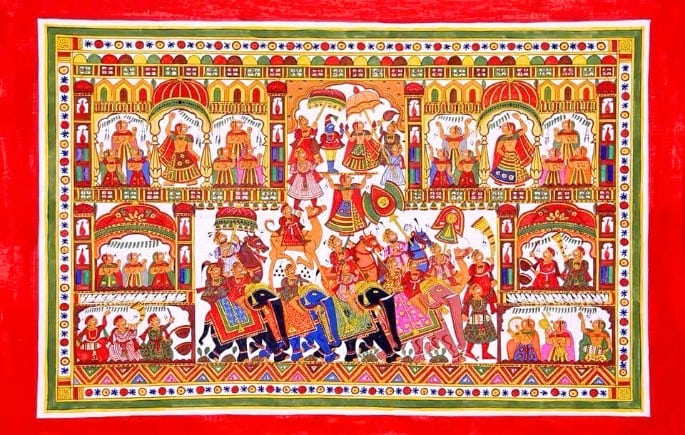 Phad paintings originated in Rajasthan and is mainly a scroll painting.

Narratives of folk deities Pabuji or Devnarayan are traditionally depicted.

They are painted on a canvas or cloth either 15 feet or 30 feet in length.

Traditionally they are painted using vegetable colours and feature a running narrative of the lives and heroic deeds of deities.

This meant that more people became aware of the painting style, hence it continues to be passed down generations. 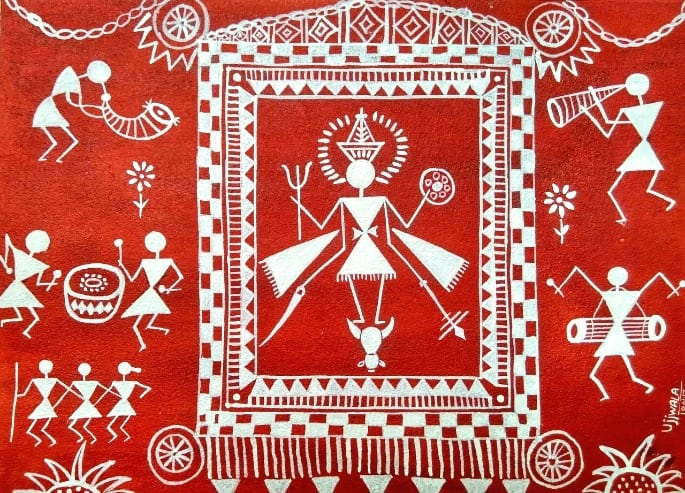 One of the oldest Indian art forms, it originated from the Western Ghat of India in 2,500 BC.

It is a style of tribal art which uses circles, triangles and squares to form numerous shapes and illustrates daily life activities.

These include fishing, hunting, festivals and dance.

What makes this art form so unique is the human shape, it is simply a circle and two triangles.

All the paintings are done on a dark background, while the shapes are white in colour.

Although this may be one of the oldest Indian art forms, it is regularly practised today. 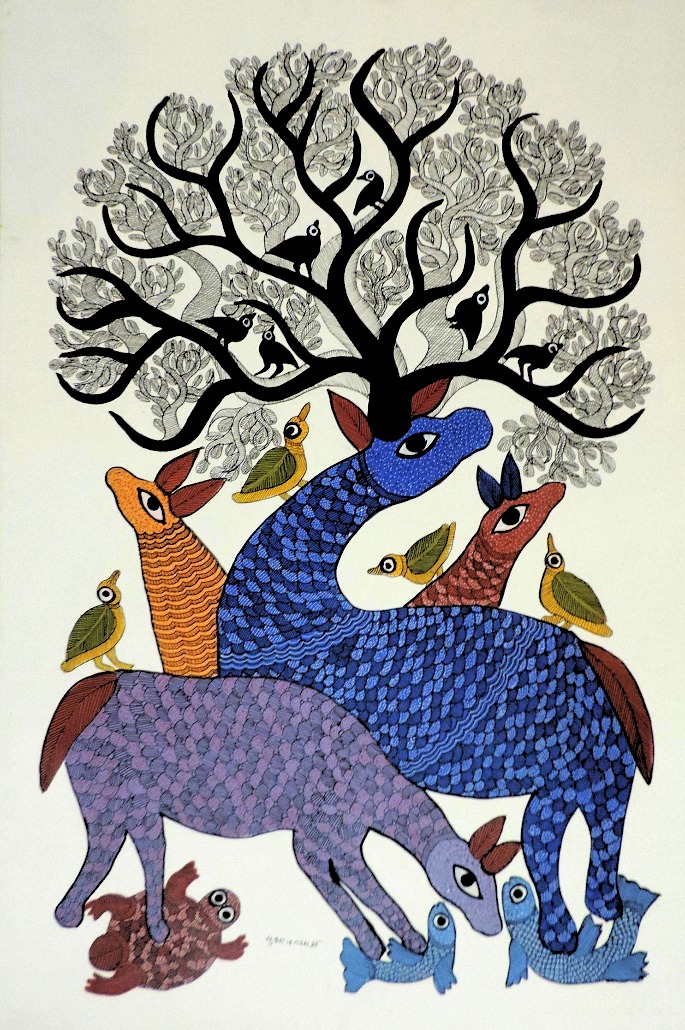 This art form is heavily focused on nature as many paintings depict trees and animals.

Although they feature very earthy colours, intricate detail can be seen close up as the paintings are made up of dots and lines.

This is an art form which has evolved for the modern day, using acrylic paints instead.

The change was led by Jangarh Singh Shyam, the most popular Gond artist who bought the art form back to life during the 1960s. 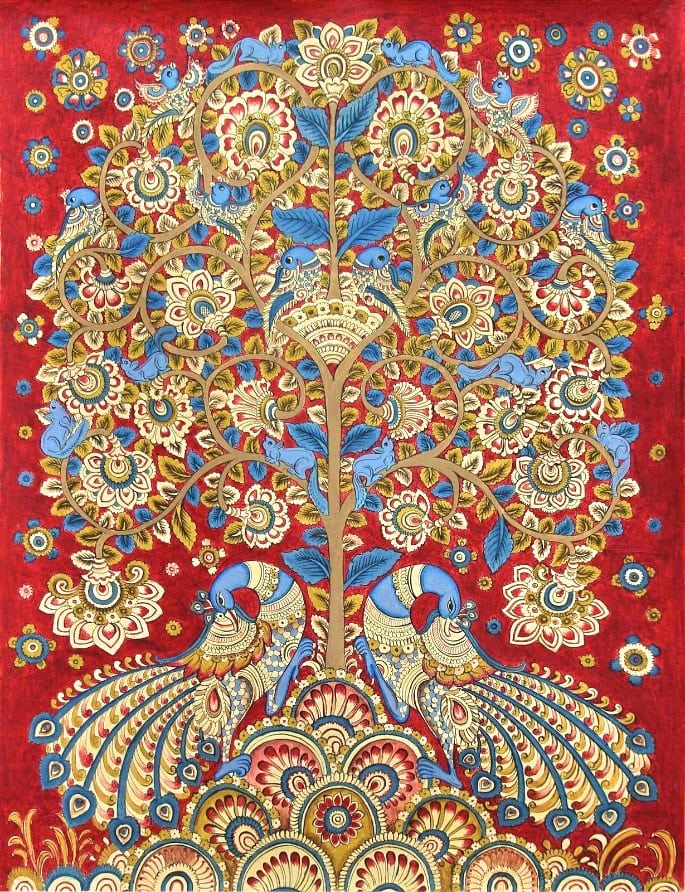 Kalamkari has two types in India.

Srikalahasti, which originates from Chitoor in the same state.

It is a type of hand-painted or block-printed cotton textile.

The name originates in Persian, deriving from the words kalam (pen) and kari (craftsmanship), meaning drawing with a pen.

This Indian art is still prevalent today as the art style is drawn onto sarees and depicts a variety of things.

This ranges from flowers and nature to epics such as Mahabharata or Ramayana. 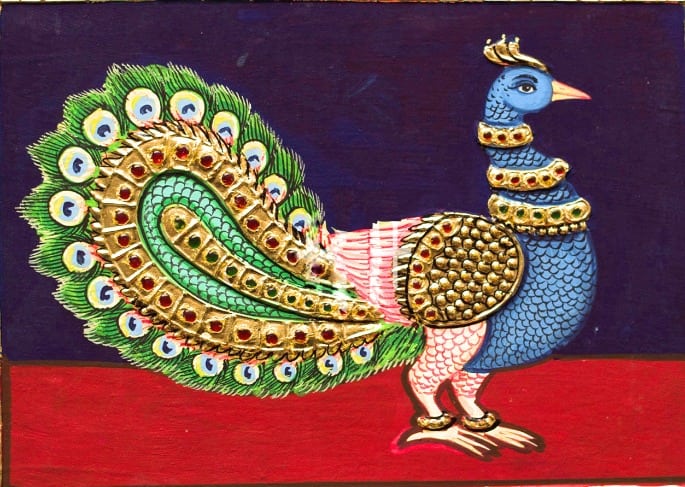 An important South Indian painting native to the town of Tanjore in Tamil Nadu.

It dates back to the early ninth century, during the period of the Chola dynasty, one of the longest ruling dynasties in South Indian history.

They encouraged art and literature, which is how this art form came to be.

Gold foil and metallic colours are the main characteristic of these paintings, which give them a surreal look.

There are several stages when creating a Tanjore painting which includes painting a layer on a piece of wood.

This gives a 3D effect when complete. It also makes it one of the longest pieces of art to create.

In modern society, this art form is regularly sought after for souvenirs during South Asian festivities. 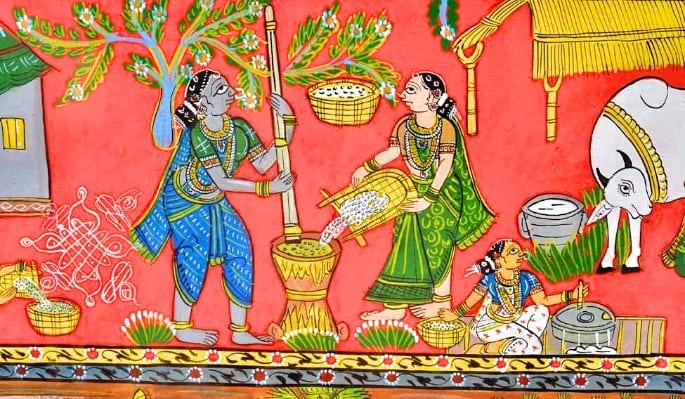 Although it is an art style that is still passed through generations, it is not as well-known as the other art forms.

This is due to modern advances such as TV, which has fenced it into its last outpost, Cheriyal village.

Originating in present-day Telangana, it is a stylised version of Nakashi art which the family have passed it down for many generations.

These 40-45 feet scrolls were of stories about Indian mythology and were designed like a story.

Similar to a modern-day film roll or comic strip, approximately 50 images featured on each scroll.

Primary colours of red, blue and yellow were commonly used to create these scrolls.

The painter’s vivid imagination is what makes the art form so unique as it was needed to tell compelling stories through art. 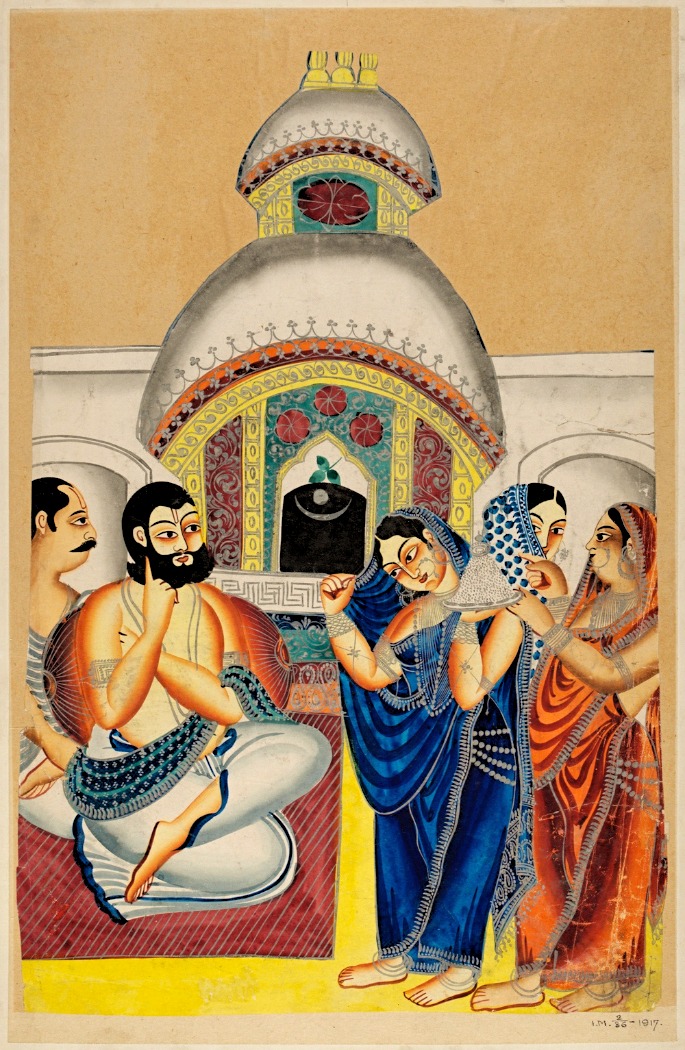 A more modern painting form, compared to the other styles.

It originated in 19th century Bengal.

These paintings usually were on cloth and initially were illustrations of a religious nature.

They then began creating art with themes of social reform, such as crime being a subject.

Kalighat art was characterised by flawless brushstrokes and simple, but bold images.

This unique characterisation was due to cheap paint colours and squirrel hair brushes.

The aim was to raise awareness about social conditions.

Conveying social themes are what makes this art form prominent from generation to generation. 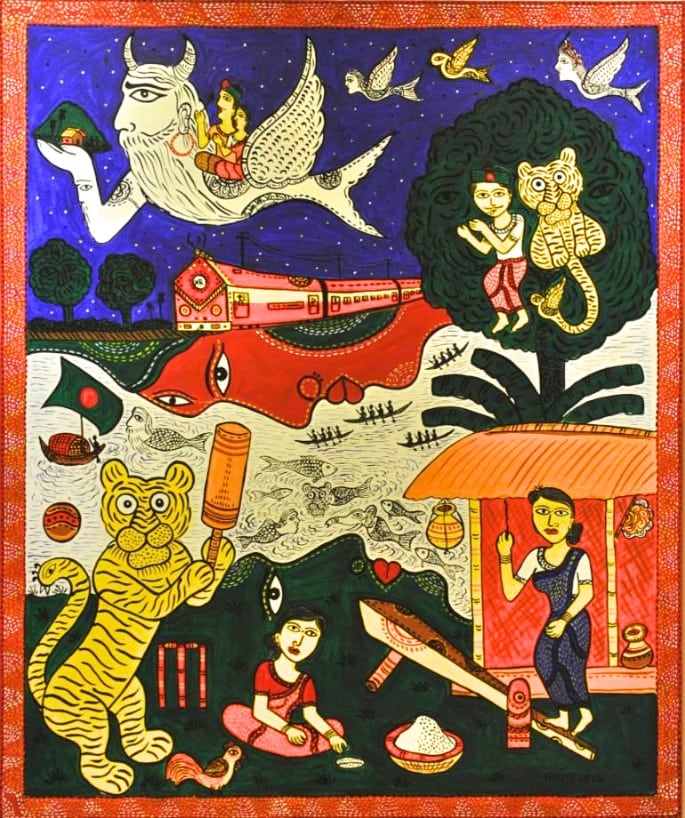 A traditional scroll painting from West Bengal in the fifth century.

Patachitra art form started in religious hubs and are a component of an ancient Bengali narrative art, which originally accompanied the performance of a song.

This art form takes heavy influence from the Mughal era as the characters in the paintings had clothing similar to what was worn during the time.

These are just 10 of many Indian art forms which have been passed down from generation.

It is something to preserve India’s diverse culture as well as an alternative way of educating younger generations about Indian mythology.

One thing is certain, all 10 of these art forms have unique features which reflect India’s different cultures.