The Unique Art of Nasser Azam

Nasser Azam is a UK based artist who has a reputation for creating art with a difference. DESIblitz met up with him to find out more about his unique art.

“A lot of my work is allegorical”

The contemporary artist, Nasser Azam, born in Jhelum in Pakistan in 1963 has established a unique reputation for his art.

Travelling to Japan, Europe and America after having exhibited his work in galleries in Birmingham and West Midlands gained him the exposure as an artist very keen to be experimental.

DESIblitz had the pleasure of meeting this incredible artist at his studio to talk about his amazing projects and work. Nasser’s work focuses on painting and sculpture and he has a passion for being different.

The theme of Nasser Azam’s art depicts him as a figurative painter who has moved into abstraction. It’s a reflection of what he uses outside of his painting as materials or environments that make his work stand out.

From zero-gravity painting in Star City in Russia to extreme Arctic painting conditions in Antarctica, Nasser Azam is a well-known artist across the media.

He went from being featured on a BBC documentary in the 1980s to sculpturing Bronze Achievement Art in 2008 to working with fashion designers, people in film and music, to painting outside his comfort zone.

Painting outside the comfort zone and creative emotional figurative painting are a source of inspiration to Nasser:

“A lot of my work is allegorical.

Taking his painting experiences to places where man rarely treads, his two projects are, “An attempt to explore the creative limits of an environment with unfamiliar sensations and it’s the idea of going outside your comfort zone,” explains Nasser.

Nasser says he “Likes the idea of collaborating his projects.”

His London Underground project collaborates his two projects with advertising and technology:

“I think collaborations are progressive learning curve for the artist.”

The two extreme condition projects had their challenges individually.

The Life in Space project in Star City was an attempt to show how bodies can be represented in various stages of motion and were inspired by Norwegian artist Edvard Munch.

The aim was to see what could be achieved by painting in a complete weightless environment.

Each piece began with acrylic and was completed with oil pastels as acrylics would have floated away as he was applying them.

By the end of his stint on board, he had managed to complete all his pieces in place. 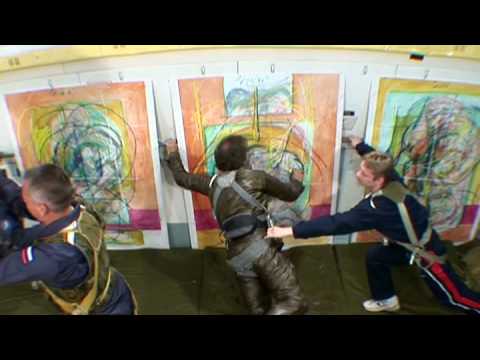 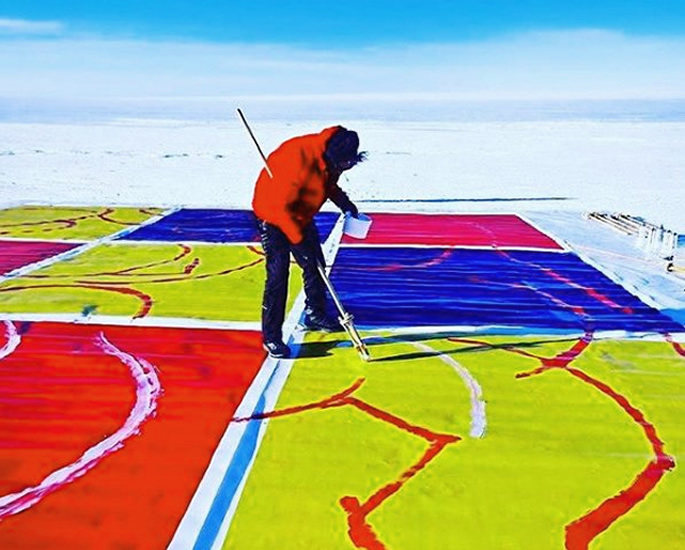 The Antarctica project was completely a different challenge.

First Azam climatised to the extreme freezing conditions by training in a Billingham market freezer section, prior to the trip.

Since there is very little chance of residence in Antarctica, it was difficult to conceptualise the environment.

“For the Antarctica project it was extreme both physically and visually,” says Nasser.

The project took over 18 months and it was the first time Azam painted on a three-metre squared canvas in such conditions.

Nasser’s explorative nature and talent has no bounds. His collaborative ideas take him to extreme adventures such as the Antarctica and Life in Space projects.

Azam feels that by using a collaborative approach, he maximises the impact on his work.

These projects give him great satisfaction and motivation to go further. When asked, whether he would take the opportunity to paint in space?

He replied: “If I was given the opportunity, I would jump at the chance to paint on the moon in the next 20 years.”

Commonly, Asian parents see future generations going into high-status professions such as medicine, law and accountancy but arts is not a typical choice.

“Traditionally Asian parents don’t perceive the fine arts as a profession,” comments Nasser on this issue.

Painting is seen more like a hobby because it may not provide the job security and financial benefits associated with other professions. But this is slowly changing as British Asian parents are acknowledging arts and sports as possible career choices.

Azam feels his career gives him great job satisfaction and hopes that his extraordinary approach to paintings and sculpture is an inspiration to forthcoming artists, he says:

Notably, his career choice has inspired family, where younger cousins view art as an option, whilst his daughter has selected fashion and his son seeks a career in advertising. 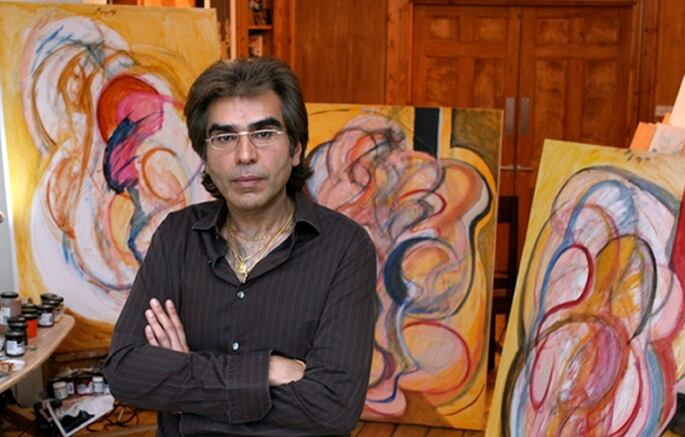 Sculpture has been a natural progression for Azam from painting.

Whilst painting has movement, sculpture offers you the opportunity to create similar movement in 3D.

He likes doing both but prefers painting because it’s quicker compared to sculpture which can take a long time to finish.

At which point does Azam feel his paintings are complete? The response resonates what most artists probably feel, “Theoretically, the work is never finished,” says Nasser.

He believes that a lot of his paintings are impromptu and reflect his feelings at the time, and says:

“Normally unless it is a large project, I like to do a painting in one sitting and normally I like to paint at night-time.”

He likes to experiment with different colours in different light sources.

Nasser feels that a variety of focused light reflects different image qualities. “I like to see the impact of natural light on a painting in comparison to artificial light,” says this unique artist.

From all of Nasser’s work, he does not have any favourites and prefers to focus on his next piece of work rather than dwell on what he has done in the past.

As with most artists, Nasser does not paint for a specific audience and accepts he has many fans of his work but says:

“I don’t really think about what the perceptions are about myself or my art. I leave it to the public or viewer to know if they are receptive to a particular work or not.”

Nasser Azam is an artist who has pursued goals to produce art with a difference. His artistic accomplishments have been recognised for their exceptional and depictive allegorical value.

He is one artist that we will look out for in the future to see what he creates next, be it even more extreme condition-based performance paintings or collaborations which will create art which is inspiringly unique.

Smriti is a qualified Journalist with an optimistic take on life, enjoying sports and reading in her spare time. She has a passion for arts, culture, bollywood movies and dancing - where she uses her artistic flair. Her moto is "variety is spice of life."
Behna (Sisters) by Kali Theatre
Popular British Asian Writers