Theatre plays are usually performed on a stage but not this one. Behna (Sisters) is a unique production by the Kali Theatre Company supported by Birmingham Rep and Black Country Touring, which takes place inside a real home with a story close to the Punjabi way of life.

"It's so real why not set it in a real kitchen"

Behna (Sisters), a play by Sonia Likhari, produced by the Kali Theatre Company in association with Birmingham Repertory Theatre and Black Country Touring, is playing in London between 28th April 2011 to 20th May 2011.

The audience is invited to join the celebrations and then eavesdrop into the relationships of a typical Punjabi family giving new meaning to the term, “kitchen sink drama.”

Written by Sonia Likhari, Behna was developed as part of Kali’s writer development programme and originally workshopped as part of the Kali Asian Women Talkback Festival at Soho Theatre, 2006.

Behna is a funny, warm and emotional look at the hidden drama of a family struggling with private jealousies and family secrets in the midst of public weddings, births and separations. 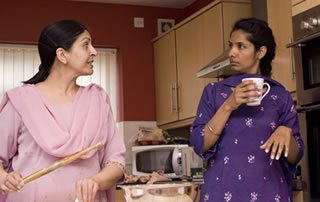 It is Ladies Sangeet Night in the Cheema household. The guests are dancing to Bhangra and Bollywood tunes.

In the kitchen elder sister, Daljit is slaving over a hot stove, while her younger sibling Simran flirts outrageously with Jagjit – her brother-in-law. Meanwhile, Mum and Masi Ji (maternal aunt), entertain the guests by performing giddha and singing folk songs. As the celebrations reach their peak, sibling rivalry emerges and the two generations of sisters find themselves struggling with much more than bhajias and bhaturas.

Behna was first presented in a real kitchen in a house in Birmingham and around the Black Country in March 2010. The production quickly sold out and received critical acclaim:

The Guardian newspaper wrote: ‘..the achievement of this production is that it feels like a spontaneous gathering while being a rigorously structured piece of
drama… ‘the most inventive piece of theatre I’ve seen this year.’

‘..this production, directed by Janet Steel is a real hit. At times comic, at others terribly tragic. It takes us into the heart of a family in a way which no usual theatre production can do’

‘…in an extremely successful collaboration we are treated to an engaging, heart warming and believable evening of drama which is taken out of the constraints of a typical theatrical auditorium. This play is certainly a break from the norm for most of the theatre-going public, and an enjoyable one at that.’ 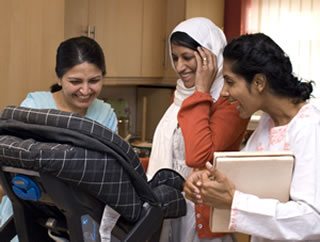 It is interesting to see how the cast acts in a residential environment in contrast to acting on a theatrical stage. Wanting the realism of the play to be highlighted, Janet Steel decided on using a real domestic setting and says: “It’s so real why not set it in a real kitchen.”

For the London performance, a house in Dollis Hill is used for the residential stage. Every new house used for the play gives the cast a new challenge and experience. The scripts are be adapted according to the layout of people’s kitchens. Steel told us, “Each house had a completely different kitchen… sometimes there is a garden and sometimes there isn’t.” 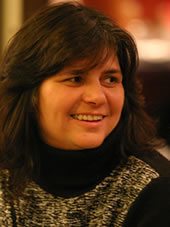 Looking at the different characteristics of house and stage plays, there are many similarities and differences.

Usually the props and stage creations are moved around creating different scene effects, but in a house the audience physically move rooms. The lighting is a lot more natural in a house compared to the stage lighting. A house play engages the audience closer to the act. There is more room to experiment with the scripts in house plays.

Listen to the audio interview with Janet Steel, the Artistic Director of this unique play to find out more about the concept and why you must go see it.

LONDON SHOWS
Performances of Behna take place in a house in Dollis Hill in London, 5mins walk from the tube station. Evening performances will finish about 9pm. The full address and information on how to get there will be given when booking.

Find further details on the show and how to book tickets below. The show is performed in a kitchen of a real house. Limited seating so book early!

Tickets for the Dollis Hill performances are being sold via The Birmingham Repertory Theatre box offiice.

Kali Theatre Company marks twenty one years as the only theatre company in the UK dedicated to championing women writers from a South Asian background. It was founded in 1990 by Rita Wolf and Rukhsana Ahmad and since 2002 its Artistic Director has been Janet Steel.

The company seeks out original writers, focusing on content and ideas as much as on style, to present memorable theatre. Kali has established a reputation for creating theatre that takes audiences on unpredictable journeys that inspire, excite and intrigue. No idea is too small, no statement too large. We actively encourage our writers and audience to reinvent and reshape the theatrical agenda.

Kali’s unique nurturing of novice playwrights through its Writer Development Programme enables new writers to be discovered and encouraged while giving them
support and enhanced skills to develop their work. The company aims to present the distinct perspective and experience of Asian women to people from all backgrounds and to celebrate that richness and diversity.

Behna relates well to the audiences as it’s based on real life experiences. It has a real balance between the domestic, humour and more serious moments of the play. This is a 10/10 must see production for its unique format and lifestyle content, aptly called ‘a gem’ by Steel.