Bridgerton: Why the Sharma Sisters’ Fashion is so Iconic

DESIblitz explores the outfits of the Sharma sisters and their significance to the hit Netflix show ‘Bridgerton’ and its audience.

"I am proud of where I come from."

The Sharma sisters’ appearance in season 2 of Netflix’s Bridgerton was a cultural reset.

Something we would have never expected to see was South Asian representation in a regency period drama.

For the majority of South Asians watching the show, we were living for the culture and the eloquent representation of Indian fashion and interior.

This had been perfectly infused amongst the casting, and the Sharma sisters were in fact, the diamonds of this series.

With Kate and Anthony’s romance arguably being the pièce de resistance.

Behind the extravagant wardrobe, the incredible tones and rich embroidery lay something of a deeper meaning.

The outfits that were made for the Sharma sisters were far from just being a costume.

They played a massive part in depicting the characters’ personalities, culture and development throughout the season.

Undoubtedly, this resonated with many South Asians who tuned in to watch Bridgerton’s latest series.

The Significance of the Outfits 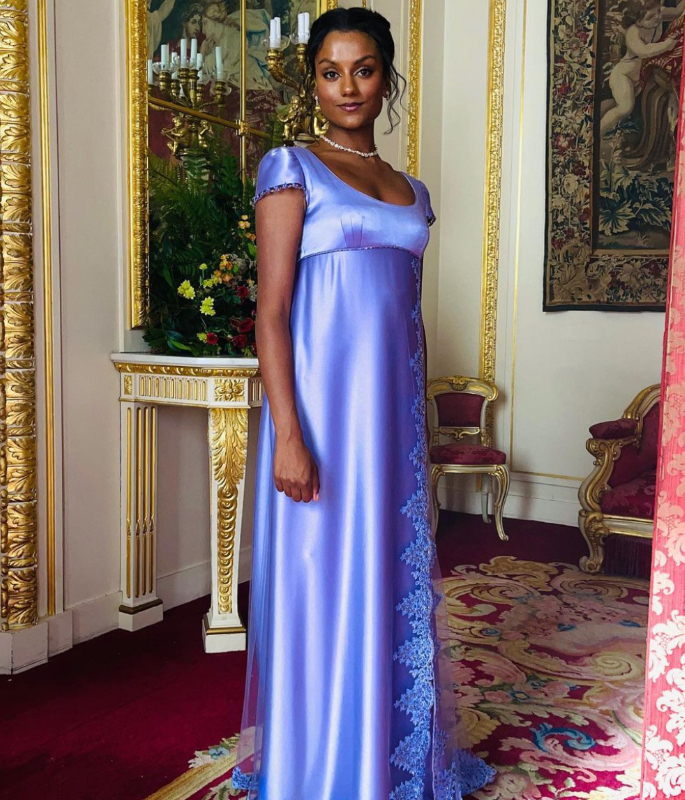 Sophie Canale was the mastermind behind the Bridgerton looks of season 2.

Her carefully curated wardrobe for the Sharma sisters helped to tell their story to the viewers.

In a recent interview with Shondaland, Sophie stated how she used the clothing as the ultimate power play on the sisters’ opposite personalities.

Kate was often dressed in deep, jewel-toned clothing consisting of purples and teals.

This represented her confidence, as well as her being the headstrong leader of her family.

Throughout the series, as her character developed, we see Kate dressed in brighter, bolder tones, portraying the warming of her heart and her feelings towards Anthony Bridgerton.

These bold colours are used very heavily within Indian fashion and will be imagined whenever thinking of a salwar kameez or churidar.

Sophie expressed in the interview: “You will see throughout the season that Kate’s costumes have a journey.

“As the season unfolds and Kate develops emotions, we see her costumes become brighter in colour and the fabrics become lighter.”

Edwina, played by Charithra Chandran, was dressed in much paler, subtle shades including pastel pinks and salmons.

This was to reflect her sweet, soft and submissive personality.

The contrast between the Sharma Sister’s wardrobes is very powerful, given the rift that occurs in the series over Lord Anthony Bridgerton.

Sophie had explained to Tudum that “pink is the colour of love” therefore, the colour was used heavily for many of Edwina’s looks.

Finding love was Edwina’s ultimate goal for the season.

India’s rich textile history can be seen through the fabric choices of the Sharma Sisters’ outfits.

Through the heavy silks, pashminas, chikankaris, gold trims and hems, they were most likely paying the most expensive seamstress in the country.

There also seemed to be a lot of paisley print within the Sharma sisters’ clothing.

The print originated from Persia, which would have been the area surrounding modern-day India, Pakistan and Iran border.

Historically, this would have been a very accurate outfit choice given the origins and timings of this fabric print in particular.

This effortless incorporation of Indian fashion elements blends seamlessly into the regency-era fashion of the surrounding cast.

Despite not always being as flamboyant, and often absurd as the wardrobe choices of the Featherington family, the Sharma sisters never failed to make a statement. 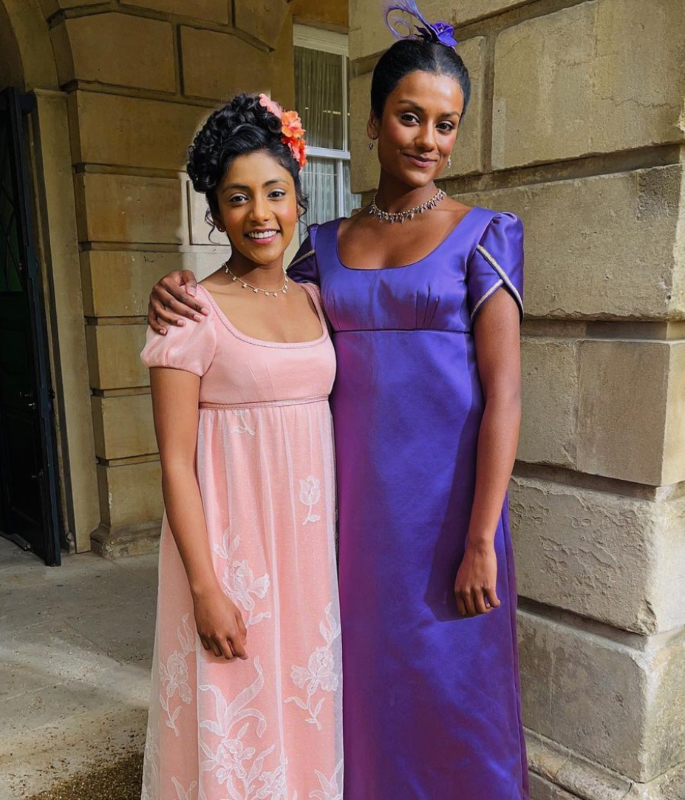 The jewellery choice of the Sharma sisters was extremely striking.

It incorporated elements of regency core through the dainty drop earrings and wreath necklaces.

However, there was a lot of gold, and stone-encrusted jewellery to reflect the strong gold heritage within India.

Notably, the wearing of jhumkas, by Edwina within episode 2, had every Desi girl digging through her jewellery box for these fashion staples.

Jhumkas (also known as jhumkis) are a popular form of jewellery throughout India.

The origin of this coveted jewel goes as far back as 300 B.C, during the Chola dynasty.

Edwina was also noticed on her wedding day, to be wearing a maang tikka, but on the side of her head.

Traditionally worn by Desi brides on their forehead, this appears to be a nod to the culture.

During Edwina’s wedding to the viscount, we see Kate wearing green jewel bangles that are said to have been a “family heirloom”, worn by Kate’s mother on her wedding day.

She had given these to Edwina to wear. Traditionally, bangles that are green in colour to be worn on a wedding day are synonymous with good luck and fertility.

The Sharma sisters also hold a haldi ceremony on the eve of Edwina’s wedding.

Both can be seen wearing traditional jewellery.

Sophie told Tudum that she wanted to “recreate the jewellery that would’ve been at a haldi ceremony but stylise it in a contemporary way.”

They can be seen wearing marigold flower garlands which are very popular within Indian culture.

Used during public ceremonies of devotion, they are an Indian wedding symbol of a union between two people.

These carefully thought-out details are imperative to telling the story of the Sharma sisters.

Why are the Sharma Sisters and their Outfits so Iconic? 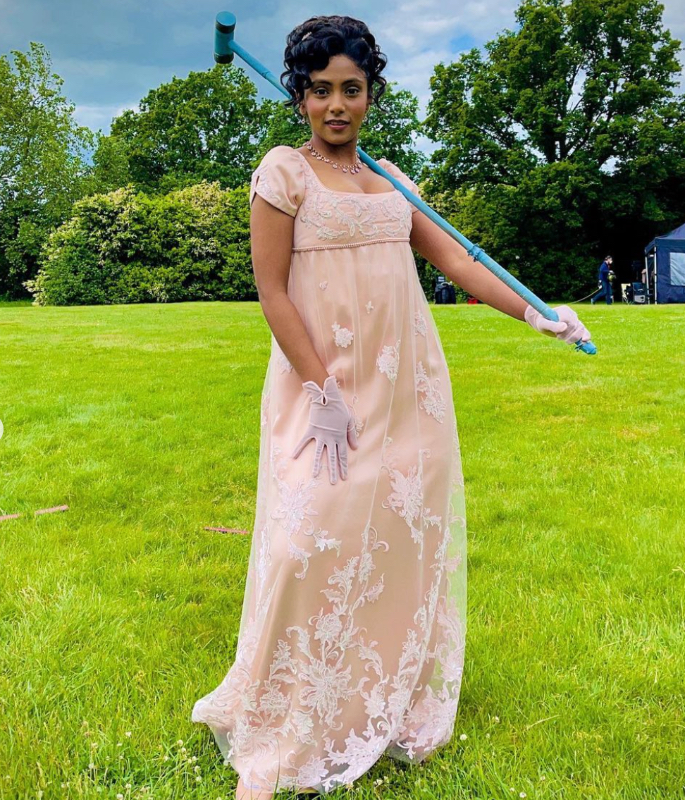 There has been solid discussion regarding the Sharma Sisters’ incredible fashion and accessories.

Aforementioned, there is a rarity behind seeing South Asian frontrunners in a Western regency period drama.

Therefore, the association with this style of dressing is not always a clear one.

Consequently, the wardrobe team behind this season of Bridgerton were left with a blank canvas.

This permitted plenty of room for exploration and experimentation.

It was vital that they carefully encapsulated the fashion trends of the time to keep consistency amongst the casting, and their dress.

As a result, the likelihood of the characters appearing ‘whitewashed’ had imposed a great challenge.

Therefore, it was extremely relieving that the rich culture of the sisters was not neglected.

As viewers, we can visualise the thought process behind the outfit choices.

The meticulous detail depicted how everything was carefully curated from the fabric choice right down to the type of embellishment.

These small, but powerful details house such an important significance for the Desi community in terms of representation.

Anjali, a 21-year-old Politics student from Bristol, and an avid fan of the show spoke to DESIblitz about this:

“The Sharma sisters allowed me to see how two cultures can be merged, even through clothing.

“I used to struggle wearing my Indian fashion around my non-Desi friends. No one ever said anything to me, but I feel it’s a completely different standard of trend and beauty.

“When I saw Edwina wearing her delicate dress and her jhumkas, I immediately went to dig mine out from my drawer to wear on a night out.

“They are beautiful and represent a part of me. They are a symbol. Some people will see them and understand the significance.

“Or someone will ask me, and I am given the opportunity to talk about my heritage because I am proud of where I come from.”

The wardrobe of the Sharma Sisters was much more than just a costume.

For many, it has raised a lot in terms of significance and representation.

Being able to see people, especially on western television, who look like you, dress like you or have the same traditions as you are incredibly iconic.

Especially when it is part of a period drama that would traditionally stray away from a non-white casting.

It amplifies how wardrobe and clothing choices are so important, for not only playing a character but also to portray their feelings and identity.

Naomi is a Spanish and business graduate, now turned aspiring writer. She enjoys shining light on taboo subjects. Her life motto is: "Believe you can and you’re halfway there."
Natasha Poonawalla stuns in Sabyasachi saree at Met Gala
YouTuber under fire for wearing Maharaja of Patiala’s diamond Choker