5 Children’s Books with Stories from India

Here are five children’s books with stories from India which will entice the imagination of young minds with folklore and childhood tales.

All countries have folk stories, however, India is ethnically and religiously diverse so it is difficult to generalise the folklore. Children’s books are one medium used to pass down stories.

As a result, there are many stories that originate from India.

Storytelling in India is a typical pastime, however, it is more than just a fun activity.

It is a way of preserving the culture and beliefs of a community and passing them down to the next generation.

Indian storytelling was very popular in villages when there was no TV.

India is rich with stories about animals and their adventures. Folk stories from India contained mythical and supernatural beliefs.

It is unknown if these stories are true or not, which made India all the more mystical.

A lot of spoken stories have passed into the 21st Century and have been written as books. Indian stories have also been adapted for cinema.

Modern advances made Indian stories available through different mediums for large audiences to enjoy and reminisce about what their grandparents told them.

Here are five great books for young children with stories from India. 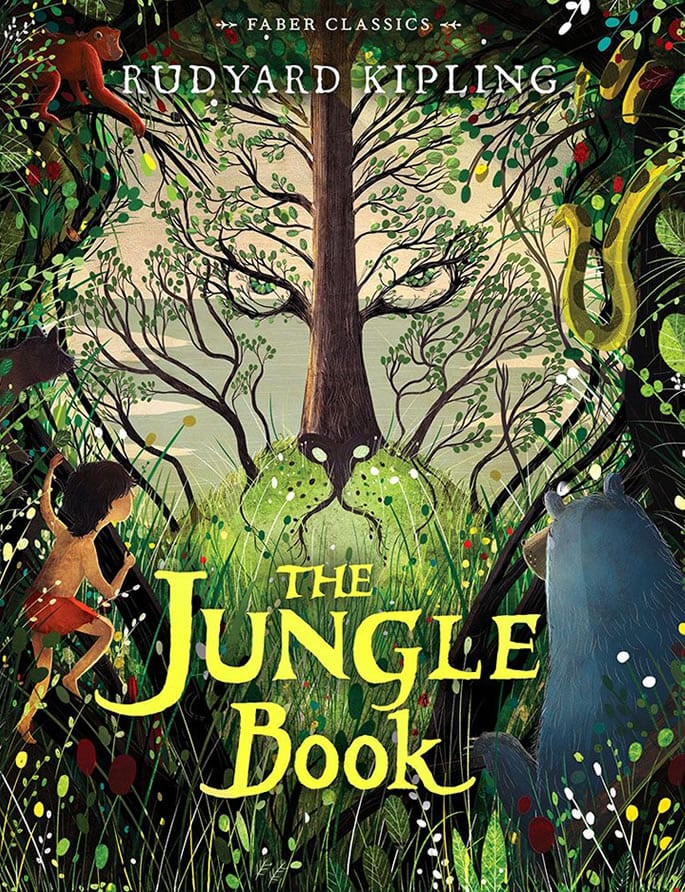 Published in 1894, The Jungle Book is a collection of stories set in the forest in India.

A location repeatedly mentioned is “Seonee” (Seoni), in the central state of Madhya Pradesh.

The main characters are animals such as Shere Khan the tiger and Baloo the bear. Mowgli is the principal character, known as the “man-cub” who is raised in the Jungle by wolves.

Mowgli receives help from Bagheera the panther and Baloo when threatened by Shere Khan.

Themes include abandonment followed by fostering as in the life of Mowgli, echoing Kipling’s own childhood.

Law and freedom is another major theme, the stories are not about animal behaviour, but about human archetypes in animal form.

The most popular book in this list, The Jungle Book is a hit with adults as well as children due to its Indian folklore tone. T

he adventures Mowgli goes on with his animal friends make The Jungle Book an excellent read for children.

Since its release, multiple film adaptations have released. A live-action adaptation was released in 2016 to critical acclaim. A film titled Mowgli (2019) relates to the same story as well. 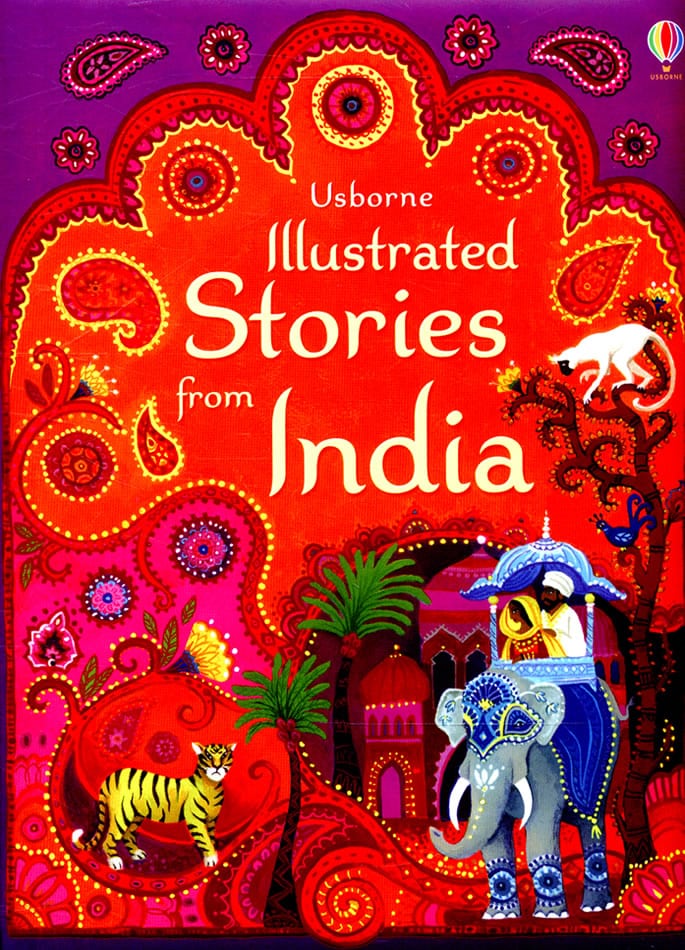 Released in 2015, Illustrated Stories from India is a collection of traditional Indian stories full of fascinating tales and ancient stories.

Tales of the battles and achievements as well as ancient stories of trickery and cunning are included in this very rich and colourful book.

Stories in the collection include A Single Grain of Rice, The Greatest Battle, and The Biggest Banquet highlight India’s rich history.

Illustrations are vibrant throughout to appeal to children, they can also learn more about India’s mythical past.

All the stories are richly illustrated for children to treasure for years to come.

These stories are also for everyone and not just children because they explore India’s historical origins, others may not have described in the same manner. 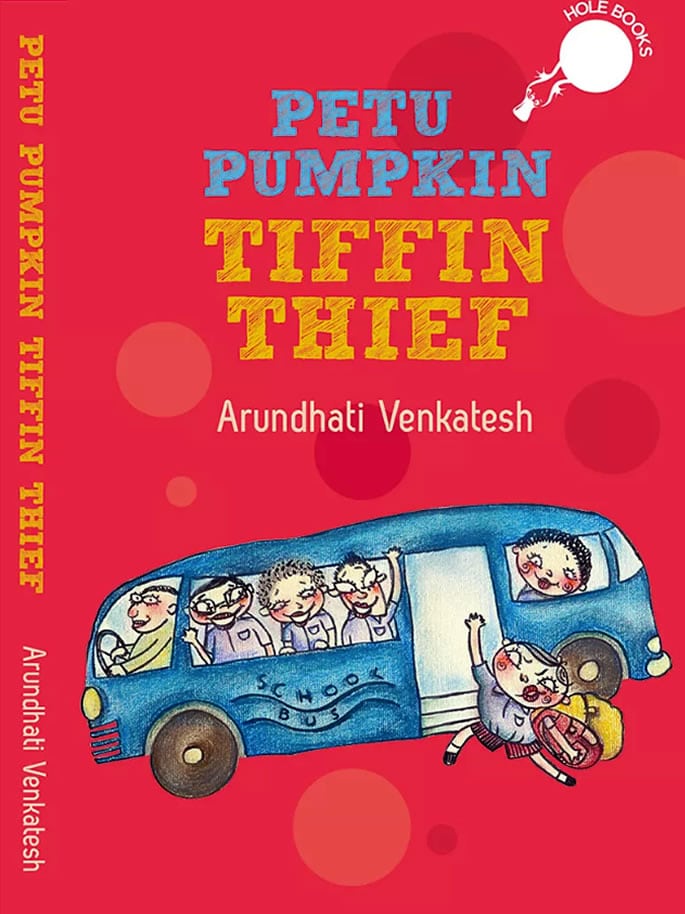 Published in 2014, Petu Pumpkin: Tiffin Thief tells the tale of Petu Pushkin, aptly named pumpkin, a seven-year-old boy that loves to eat. He eats everything and anything all day.

Petu eats everyone else’s food as well as his own which is packed into multiple tiffins.

His classmates are fed up with Petu’s constant eating and shield their food from him. They try all they can to keep their food, nothing works and they end up hungry.

However, one day they come up with a new idea that may just work.

Petu Pumpkin: Tiffin Thief has memorable characters who accompany the high-quality illustrations which show the detail of each character and the variety of tiffins carried by Petu. 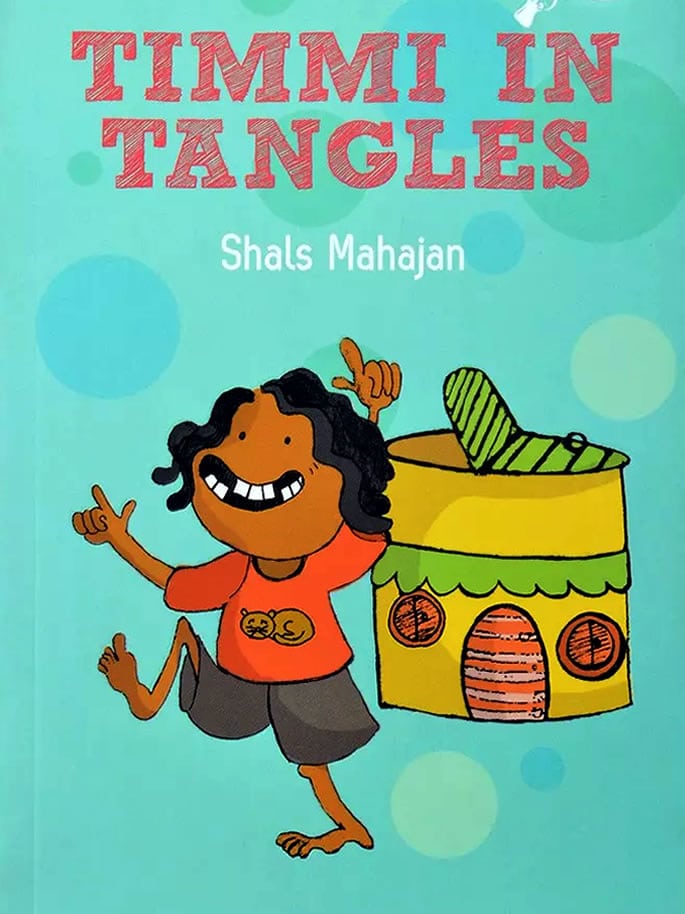 Published in 2013, Timmi in Tangles tells the story of Timmi, a girl with a wild imagination. Her mother encourages her to go to school even though she is a raja.

Life for Timmi revolves around the few people she has created from her imagination.

Although only a small children’s graphic book, Timmi in Tangles is easy to enjoy because of its lead protagonist.

The sincerity and sweetness of Timmi make the book a great children’s book.

The narrative from Timmi’s point of view brings a fresh perspective in terms of storytelling.

Timmi has a range of emotions throughout the story – sad, sweet, funny and distressed.

Timmi in Tangles engages readers of all ages. Mirnalini Venkatraman is a huge fan of the story and said:

“Timmi’s definition of normal is very different and you will instantly fall in love with her. It’s not just a children’s book.”

Reality and fiction blend together in urban India and Timmi’s experience is told in an easy, flawless manner.

Timmi’s unorthodox family is not forced in the story so their inclusion is effortless.

A short tale full of depth is why Timmi in Tangles is a must-read children’s story from India.

Gobble You Up! – Gita Wolf 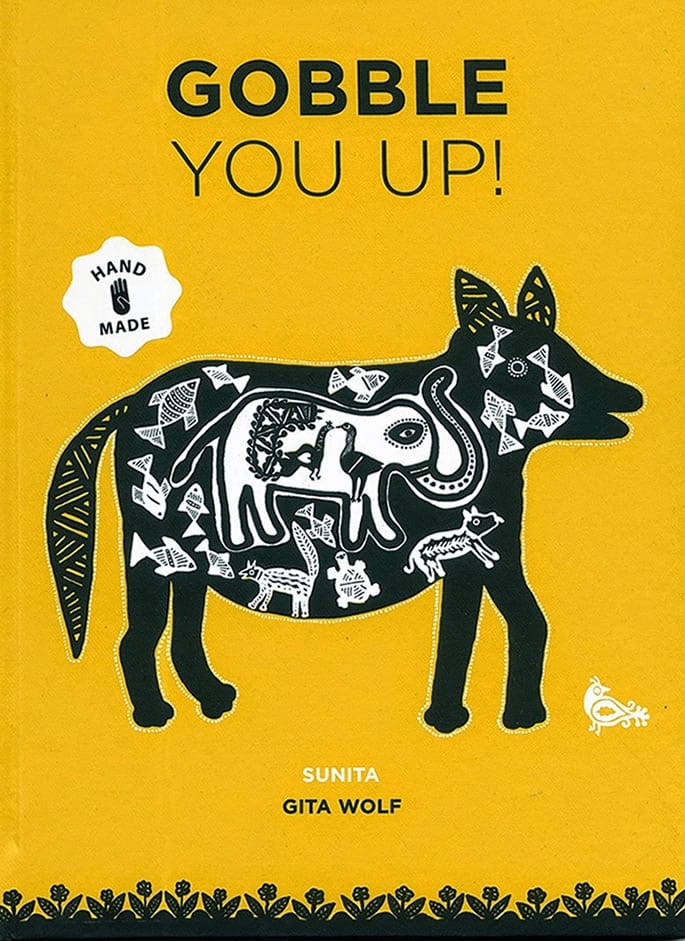 A 2013 release, Gobble You Up! centres on a wily jackal, who is too lazy to hunt for his food.

He tricks his friend, the crane into becoming his prey. He goes on to eat every animal that he comes across.

Gobble You Up! is a short story written in cumulative rhyme adapted from a trickster tale from Rajasthan.

The book is promoted as hand-made with illustrator Sunita’s drawings which rework traditional imagery to illustrate a playful tale.

Sunita who is actually from the Meena tribe in Rajasthan uses the traditional Mandana art form, which is painted on floors and walls of village homes by women.

This is a creatively new concept used in a children’s book and rarely observed outside of Meena villages in Rajasthan.

Unique narrative and the rhyme give the tale an ongoing flow which makes Gobble You Up! a very suitable story for children.

These are just five of many children’s books with stories for children and parents to enjoy from India.

There is no doubt that new and modern stories for children will emerge as India evolves into a different country with time.

Dhiren is a journalism graduate with a passion for gaming, watching films and sports. He also enjoys cooking from time to time. His motto is to “Live life one day at a time.”
The 10 Most Costly Indian Paintings Sold at Auction
Rooh by Rupinder Kaur: Breaking the Rules of Poetry