While most Indian cuisine is about delicious flavour, they can also be larger than life. We look at Indian foods and drink which are world record breakers.

"We started in the morning and took more than six hours to cook."

Indian food and drink are enjoyed by many and are cooked with a lot of flavours, but sometimes they can be larger than life.

World records involving food is a challenge many cooks, both amateur and professional, are up for.

The vast range of Indian foods and drink gives the ambitious chefs and connoisseurs a lot of choices when deciding on the food or drink to supersize.

Their creativity and dedication to make these ambitious challenges are second to none. A lot of hours and a lot of ingredients are used to make these record breakers possible.

Many of these record-breaking foods do not go to waste, they are donated to good causes to help others out.

Let’s take a look at a selection of the amazing Indian foods and drink which have become part of the glorious Guinness World Records. 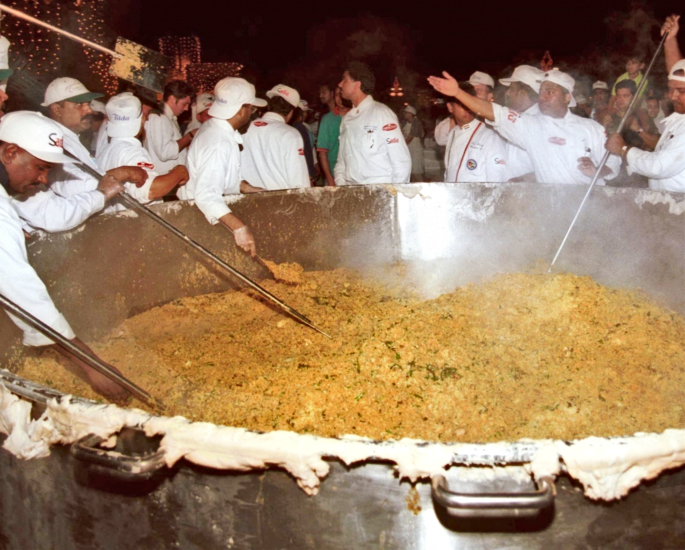 The biryani is an Indian classic with many variations, all of which are full of flavour.

Layers of rice, spices and meat combine together to create a delicious meal.

It is also a dish which has been magnified for the purposes of achieving a world record, and it became a reality in 2008.

The chefs needed the help of three cranes to pour the massive quantities of ingredients into the huge steel vat which was used as a pot.

A further 931 kilos came from the chilli peppers, salt, spices and yoghurt.

Simple spoons would be no match in stirring the giant dish, so the chefs used long oars to mix the ingredients together.

Cook Sushil Kapoor said: “It’s a unique event. It’s not easy to cook such a large amount of biryani.

“We started in the morning and took more than six hours to cook. But we enjoyed doing it.”

The huge biryani did not go to waste after the record was achieved. Event organisers divided it up into collection boxes and sent it to orphanages across the city. 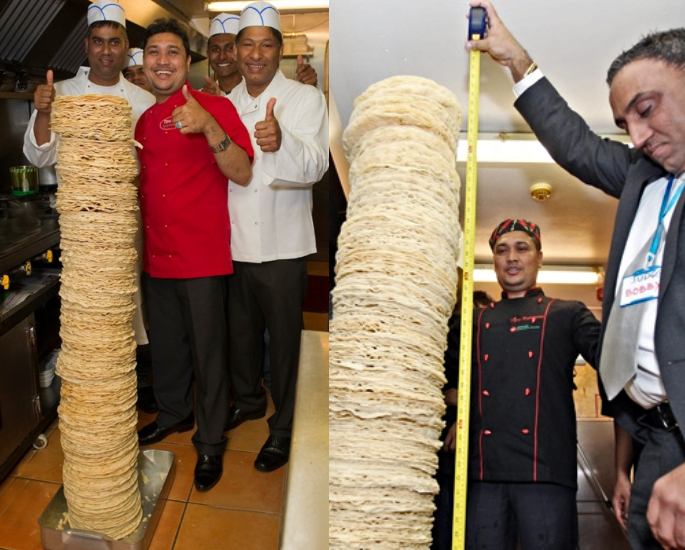 The thin, crisp snack is a favourite in curry houses and takeaways and it’s easy to see why.

It is cooked with dry heat or fried and can either be plain or full of spices from the pieces of chilli embedded in the snack.

The poppadom also became record-breaking in 2012 when Northampton-based chef Tipu Rahman wanted to be in the history books.

He spent two hours cooking all 1,280 poppadoms and stacked them on top of each other until it stood at five-foot seven inches tall.

Tipu, originally from Bangladesh and operates the Tamarind Restaurant in Northampton, had a lifelong dream to be a record holder.

He said: “I’ve always thought about doing something like this.

“It is important for me and the Bangladeshi community as a whole.

“I chose poppadoms because when you walk into an Indian restaurant that is the first thing that you would ask for and they can be made quickly.”

The poppadom tower had a few scary moments for Tipu and his team when it began wobbling, however, they overcame it and went on to achieve the world record.

According to Mr Rahman, his magnificent achievement is a way to showcase Norhampton’s curry industry.

“I am very proud. It was hard work and took a lot of practice but we did it.”

“It’s brilliant for the curry industry in Northampton and really puts us on the map.” 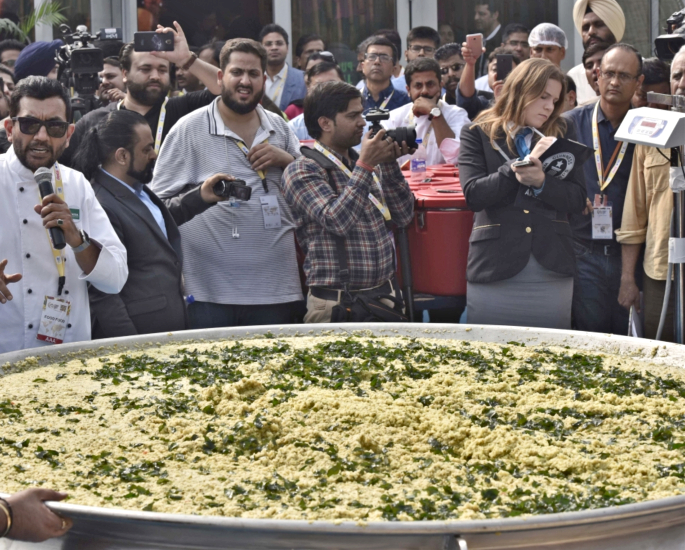 The dish is typically made with rice and lentils, but other variations include bajra and mung dal.

It is also a dish to break records and it did in 2017 at the World Food India event when 918 kilos of khichdi was made.

The attempt was led by renowned chef Sanjeev Kapoor and had been months of planning.

Fifty other chefs helped Sanjeev achieve the world record which needed over 250 kg of solid ingredients.

A giant utensil with a capacity of 1,143 litres and a customised electric boiler to produce seven kilos of steam was used to hold the dish.

When describing the process Sanjeev said:

“The preparation for this has been going on for months now.

“We needed a customised kadhai and steam pipeline put in place and also a crane to move the utensil around.”

The long task of chopping the vegetables began a day prior to the cooking and the first bit of ghee was dropped in the pan at dawn.

Like the biryani, the khichdi was given to a good cause, being donated to orphanages.

The world record khichdi is a showcase of Indian food to the rest of the world, according to Kapoor.

He added: “We promote international foods in India and it is our opportunity to showcase our superfoods to the world.” 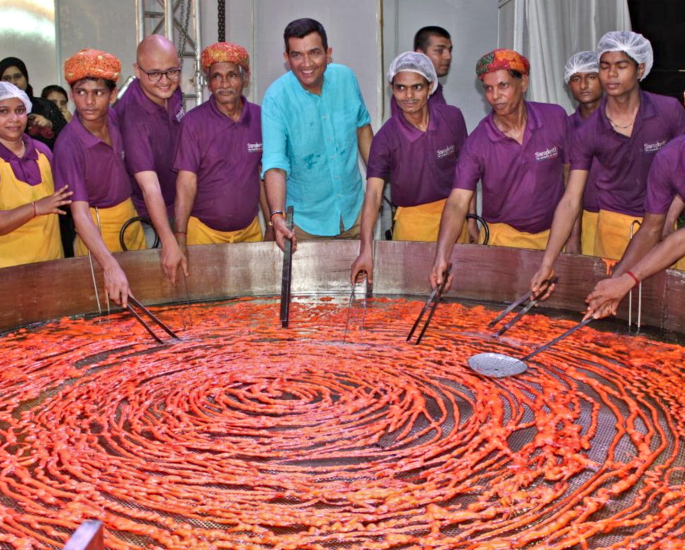 This sweet treat is very popular in South Asia and is made by deep-frying maida flour batter, which is then soaked in sugar syrup.

The result is a shiny and slightly crisp sweet-tasting snack.

It is no surprise that a giant version has been made and has found its way into the Guinness Book of World Records.

Mumbai restaurant Sanskriti created a jalebi in 2015, weighing a whopping 18 kilograms with a diameter of nine feet.

A team of 12 was led by Gaurav Chaturvedi to make the jalebi, which took three hours and 53 minutes.

Despite the long process, it was worth it when it became the largest jalebi in the world.

In a statement, founder of Sanskriti restaurant Sapna Chaturvedi said:

“It’s a proud moment for us and I’m very happy that the purpose with which we attempted this event is achieved.”

This giant jalebi is definitely a sugar rush, fit for those with a sweet tooth. 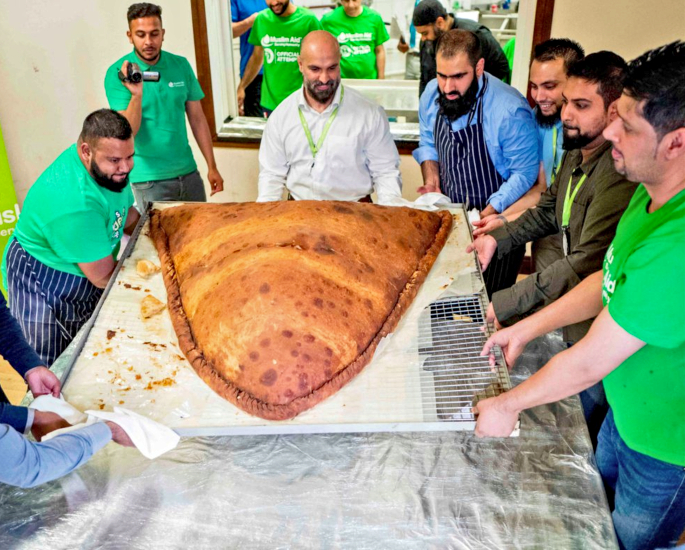 The fried snack is a very popular Indian food which combines a flavourful, savoury filling with crispy pastry.

It is also part of the Guinness World Records, courtesy of a London-based charity in August 2017.

They made a king-sized samosa weighing a whopping 153 kilograms, smashing the previous record by 43 kg.

The gigantic snack was made by 12 volunteers on a large wire mesh, which was then winched into a large vat of oil to fry.

When attempting the record, there were specific rules such as the triangular shape, it also had to contain flour, potatoes, onions and peas, as well as retaining its shape when cooked.

The process was a nervy one for organiser Farid Islam, which took a total of 15 hours.

While making the mega samosa, a crack appeared and Farid feared the worst.

He said: “It was very tense. It looked like it was going to slide off.”

“A crack appeared and I feared the worst.”

Luckily, it was a minor problem they overcame and carried on to make the massive samosa.

After the weigh-in, it had a taste test for it to be eligible was met with a simple thumbs-up, which drew huge cheers.

The delicious looking samosa was later divided into hundreds of portions which were distributed to the homeless. 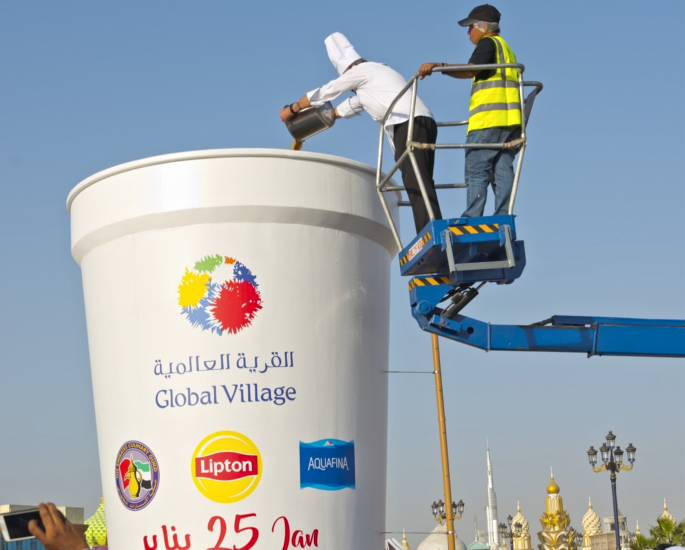 Variations of Karak chai is prepared in many South Asian homes by heating black tea, milk, sugar and cardamom on a low flame.

It seemed that 138 chefs based in Dubai had other ideas and decided to make the largest cup of it.

In January 2018, the team of chefs, all from different hotels and restaurants set the world record by brewing 5,000 litres of fresh Karak chai.

They began preparing the tea from 9 am onwards at 70 cooking stations. The entire process took six hours to make.

The small batches of tea were then poured by the bucketful into a giant teacup that had a height of 3.66 metres.

A heating coil was placed inside the cup to keep the hot and other tools were placed to stir it.

This amazing feat was led by chef Uwe Michael, president of the Emirates Culinary Guild.

Five hundred different sets of ingredients were mixed together to get the perfect taste.

Over 45,000 Visitors at the Global Village had a chance to enjoy free cups of the authentic tasting Karak chai. 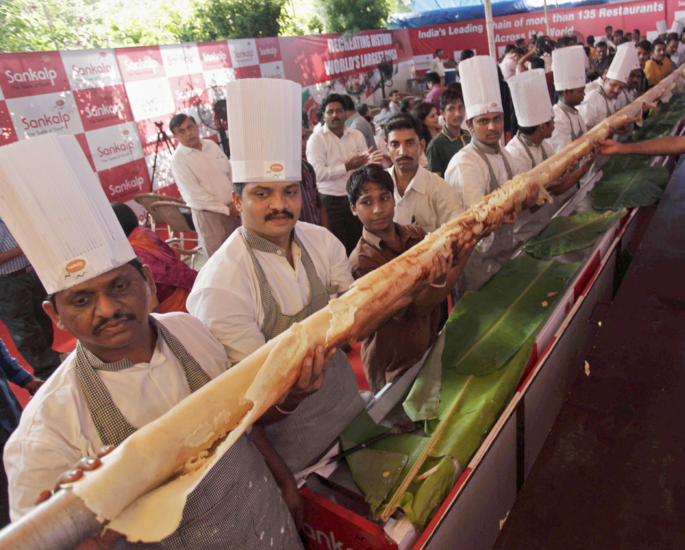 The popular snack is a typical part of South Asian cuisine and comes in a number of delicious variations.

They are typically filled with a mix of potatoes and chutney, which makes for a light and tasty dish.

It has also been supersized to break culinary world records and make it into the history books.

Ahmedabad-based Sankalp Group are efficienados when it comes to making record breaking dosas.

They have broke their own record for the longest dosa twice.

Their latest was in 2014 when a team of 32 chefs prepared a dosa measuring 54-foot-long in Hyderabad.

Despite using a whopping 80kg of flour and 30kg of ghee, it only took 10 minutes to make.

Sankalp Group has over 135 restaurants in six different countries. Their record-breaking dosa is one way of promoting their brand.

This selection of record-breaking Indian foods and drink have mostly taken a lot of time to prepare with extensive planning.

All have made their presence known to the world with their culinary achievements and have become a part of history.

Will anyone be able to break these records? Only time will tell, if another chef or food entrepreneur decides to take them on and become the new owner of the records broken.

Images courtesy of The Tribune and Gulf News