The History of the Samosa

Did you know that the samosa is not actually Indian? DESIblitz explores the origin of the samosa and why it is a food loved by millions around the world!

"The samosa offers you the ultimate tongue seduction."

The samosa offers you the ultimate tongue seduction. The tantalising taste emanates from the triangular tetrahedral golden-fried pastry, filled with spiced mash potato and vegetables, or ground minced meats.

The samosa has been very popular in South Asian cuisine for the last eight centuries. The taste of the samosa transcends class and status.

It has been enjoyed in the courts of Sultans and Emperors, as well as in the ‘gullies’ and streets of towns and cities across India and Pakistan.

Although we think of the samosa as native to South Asia, it is Central Asian and Middle Eastern in origin. Arab cook books from between the 10th and 13th centuries refer to pastries as ‘sanbusak’, which came from the Persian word, ‘Sanbosag’. 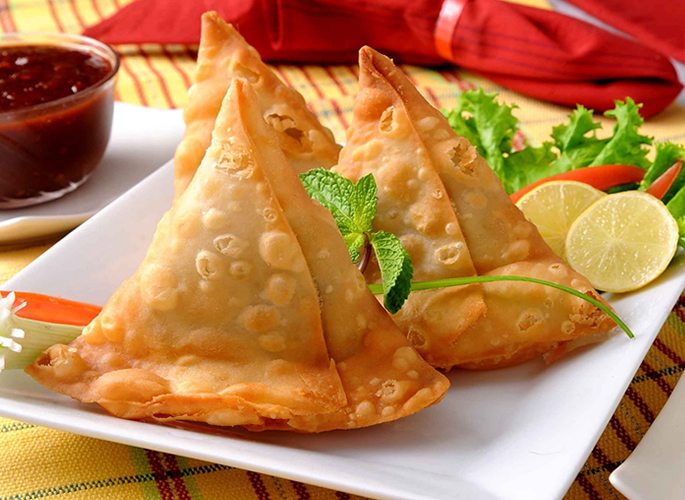 It is believed that in Central Asian communities, people would make and eat samosas due to their convenience, especially when travelling.

Small mince-filled triangles were easy to make around the campfire during night halts, to be packed into saddlebags as snacks for the next day’s journey.

The samosa was introduced to South Asia during the Muslim Delhi Sultanate when cooks from the Middle East and Central Asia came to work for in the kitchens of the Sultan.

This was documented by the scholar and court poet, Amir Khusro, who wrote in around 1300 that the princes and nobles enjoyed the ‘samosa prepared from meat, ghee, onion and so on’.

After its arrival in India, the samosa was adapted as a vegetarian dish in Uttar Pradesh. Centuries later, the samosa is one of the most popular vegetarian snacks in India.

In North India, the pastry is prepared from maida flour and houses fillings such as a mixture of mashed boiled potato, green peas, onion, green chilli and spices. 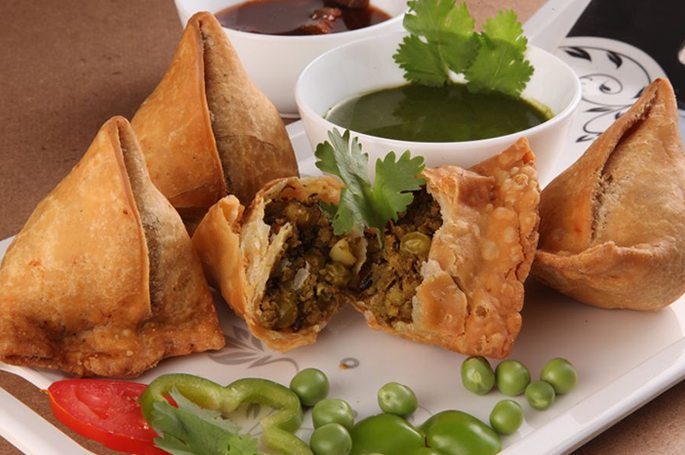 Meat samosas are also common in North India and Pakistan, with minced beef, lamb, and chicken being the most popular fillings. Paneer is another popular filling in northern India.

Samosas are served hot, and usually eaten a fresh chutney such as mint, carrot, or tamarind. In Punjabi households, ‘dhabas’, and street stalls, samosa is served with a chick pea curry called ‘channa’.

Another popular variation in Indian street food is the Samosa Chaat. The samosa is topped with yoghurt, tamarind chutney, finely chopped onions, and masala. The contrasting flavours, textures and temperatures is sensational.

Street food gastronomes, particularly in Mumbai and Maharashtra, are familiar with the Samosa Paav. This is a samosa served in a fresh bun or bap, and it is like an Indian samosa burger. 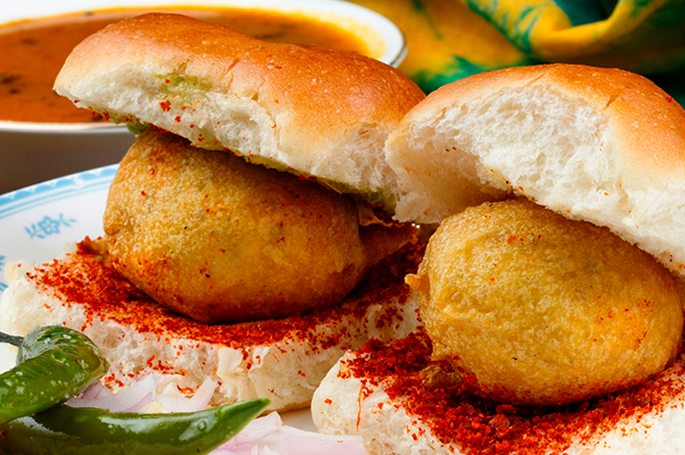 A sweet samosa, known as a Mawa or Gujiya Samosa is also eaten in some parts of India, particularly to celebrate Diwali. In part of northern India, varieties of sweet samosas include dried fruit.

In South India, samosas are influenced by the local cuisine, they are made with South Indian spices. They are also folded differently and usually eaten without chutney.

As well as the familiar ingredients, South Indian samosas may also include carrots, cabbage, and curry leaves.

In Hyderabad, the samosa is known as ‘lukhmi’ and has a thicker pastry crust and is usually filled with mince-meat.

Bengali ‘shingaras’ are smaller and sweeter than samosas. The pastry is flakier and made from white flower instead of wheat flower. The filling includes unmashed boiled potatoes.

The Goan samosa is known as a ‘chamuças’, which is made with minced pork, chicken, or beef. The chamuças spread to Portugal, Mozambique, and Brazil, where it is known as ‘pastéis’.
In Arab countries close to the Mediterranean, the semi-circular ‘sambusak’ contains minced chicken or meat with onion, feta cheese, and spinach. In Israel, they often include mashed chickpeas also.

In Central Asian Turkic-speaking countries, the ‘somsa’ is baked instead of being fried. Minced lamb and onion is the most popular filling, but cheese, beef, cheese, and pumpkin are also popular.

In the horn of Africa, the ‘sambusa’ is a staple of Ethiopia, Somalia and Eritrea. The snack is traditionally served at Ramadan, Christmas and other special occasions. 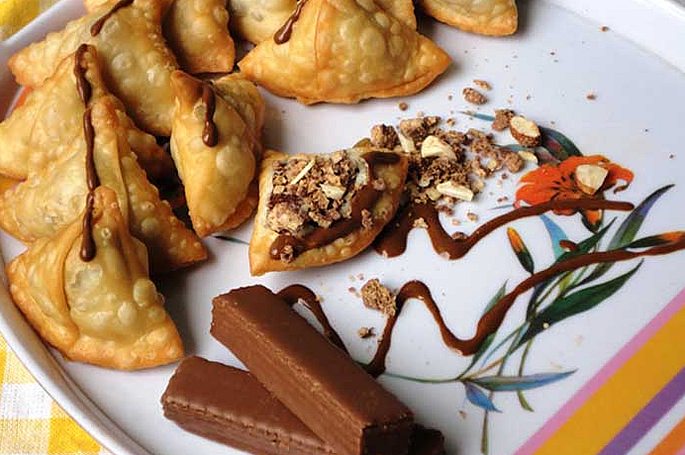 In our globalised world, the growing popularity of fusion food has witnessed the advent of the pizza samosa and the macaroni samosa. Dessert varieties inspired by western cuisine include the apple pie samosa, and the chocolate samosa!

Another innovation, particularly in the west, is to make the samosa healthier by baking it instead of frying it, and packing it full of fresh vegetables.

The Indian community has taken the samosa to the west, where it is widely available. It is served as a starter in Indian restaurants.

It is sold in traditional Indian sweet shops, either ready to eat, or to cook at home. Indian families and cooking enthusiasts have for years enjoyed the indulgence of home-made samosas.

The samosa has become so mainstream that it is now sold in the big chain supermarkets. It is available as ready meal, as a ready-to-eat snack in the deli section, and as a frozen food item.

Samosas are a truly international food enjoyed by millions around the globe. So why would you want to be the one missing out?

Whether you are travelling to one of the countries mentioned, or just sitting in your living room at home, wow your taste buds with the taste of the humble yet fiery samosa!

Dreamer by day and a writer by night, Ankit is a foodie, music lover and an MMA junkie. His motto to strive towards success is “Life is too short to wallow in sadness, so love a lot, laugh loudly and eat greedily.”
7 Indian Curries you Must Eat
EU lifts Indian Alphonso Mango Ban