Christmas comes early for the housemates in Bigg Boss 9 as Shahrukh Khan and Kajol bring gifts and games. Salman welcomes SRK with open arms, and the two enjoy a long overdue catchup!

"This is not a multiple choice paper!”

It seems that Prince may be enjoying morning and goodnight kisses from Nora.

Mandana reveals this spicy news to Rishabh, and Priya adds that while she hears the sounds in the night, she’s not sure who it is.

The trio discuss what the intentions are behind the kisses and whether they are real or fake. Later on, Prince admits to liking Nora, but wants to see what will happen outside the house.

Bigg Boss gets the inmates to play ‘Murder Mystery’, which divides the housemates into detectives, killers and common people, all selected from random from white, blue and red pearls. 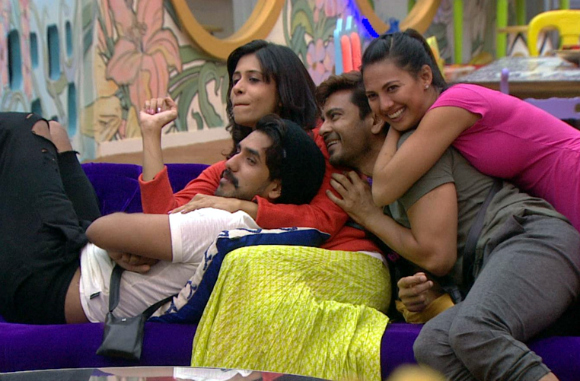 Bigg Boss adds that the winner or successful housemate might have a chance at becoming captains, while anyone who is killed will see an effect on their nominations.

The housemates open a box one by one. Picked are Keith (Captain), Nora, Suyyash, Rochelle, Kishwar and Gizele as the ‘Commoners’; Rishabh and Priya as the ‘Detectives’, and Prince as the ‘Killer’.

Prince is given both a phone and five ways to choose from to kill someone:

Prince is clearly in his element, he manages to get Gizele to kiss him, and starts a pretend fight with Mandana.

Kishwar and Nora are also killed. After examining all the evidence in the make-shift court, Prince becomes the new captain.

As a prize he’s offered to take one girl on a special date, and picks Nora. They have a date outside with food in the hot tub, and some dancing. 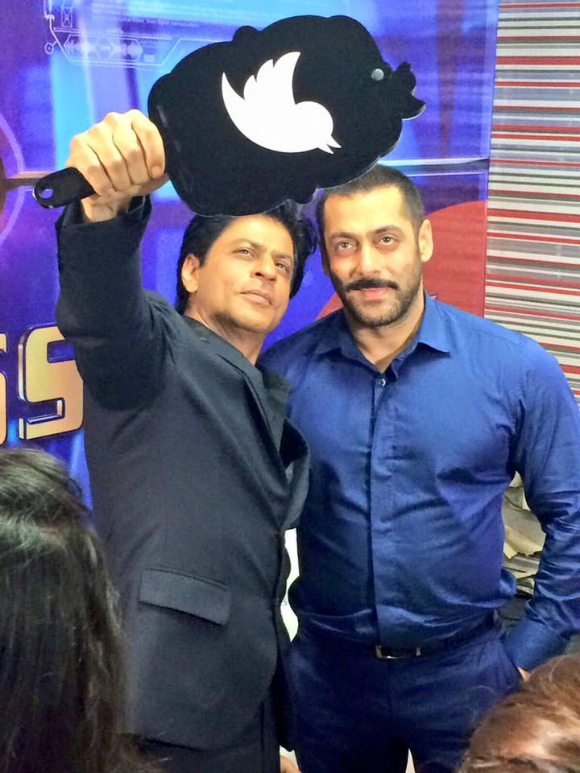 Host, Salman Khan is excited to welcome a fellow Khan into the house – none other than his ‘frenemy’ Shahrukh! He pretends to chat on the phone with SRK, complaining to him on always being late.

The two arrive on stage together on bikes, and dance together. They run in slow motion and hug each other to the song, ‘Yeh Bandhan Toh Pyar ka Bandhan Hai’.

The pair enjoy lots of banter and a huge catch-up where they discuss their friendship and what really happened between them, including all the media coverage vs actual reality.

Kajol then arrives and they dance to the Dilwale song, ‘Gerua’ before entering the house. 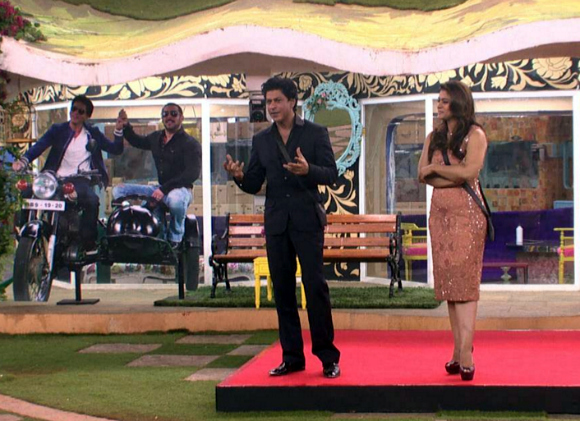 Salman finally puts the housemates at ease, saying that there will be no eliminations this week.

Those already nominated (Rochelle, Suyyash, Gizele, Rishabh, Mandana and Priya) will carry onto next week where they will face a double elimination.

SRK says he’s brought the group gifts and he and Kajol dance and sing together to ‘Honton Pe aisi baat’.

When Bigg Boss welcomes the Jodi to the house, SRK admits that Bigg Boss’ voice is very scary, and Kajol agrees.

Shahrukh tells them they’ll play a game and Kajol wants to choose two best friends. She picks Mandana who says: “I don’t need any friend here, I don’t make friends.”

SRK ask Rochelle to come forward, and says: “We will ask questions from you both, you both will stand in different booths and if you say it rightly then other inmates will be filled in opponent’s booth.” 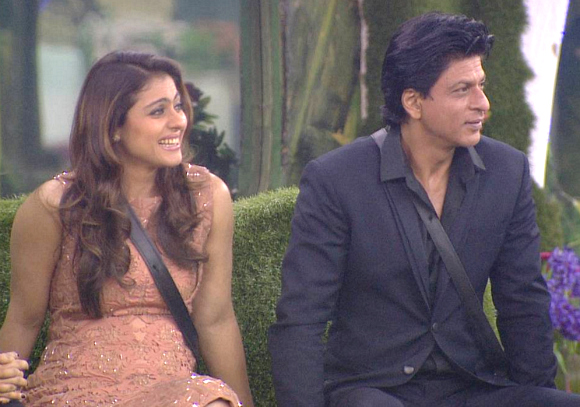 Mandana struggles with the IQ Test and after being asked to say A-Z backwards, asks for another question.

Kajol jokes: “This is not a multiple choice paper!”

“If you don’t answer question then we will have to fill your booth and we will send Kishwar first.”

Kishwar says: “She [Mandana] always give up task.”

Kishwar goes and stands in Mandana’s booth, she makes weird faces at Mandana, Mandana is confused seeing her, everyone laughs. Unsurprisingly, Rochelle wins. The next game sees a boyfriend-girlfriend-dog with Kishwar, Prince and Suyyash. 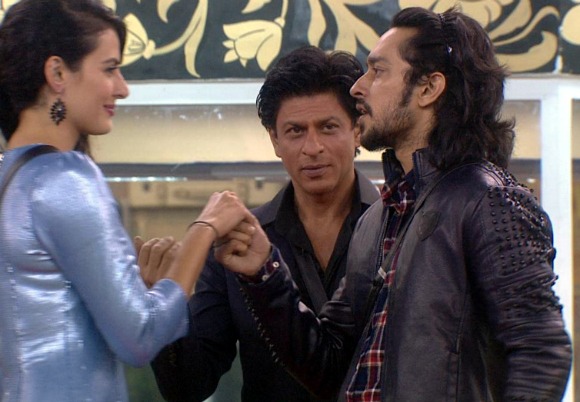 SRK goes on to teach Rishabh a few love tips on stage, which he later uses on Mandana. Nora and Prince do another romantic scene using dialogues from Shahrukh’s movie.

The suspected real-life couple are declared the best, and the ‘Dilwale Jodi of the House’.

After the SRK and Kajol leave, Priya is attacked by the other housemates for her so-called ‘sleazy comments’, and brand her as vulgar.

The pairs selected are: Rochelle and Rishab, Keith and Nora, Mandana and Kishwer, and Suyyash and Priya. 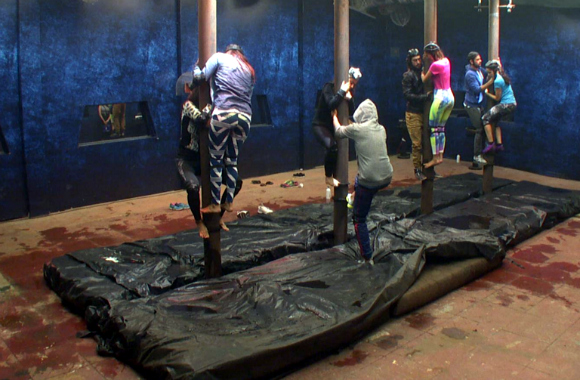 Gizele is chosen as moderator and because Prince is the captain, he will not play.

The pairs are asked to stand on poles. Prince is in confession room and has to guess which pair will last the longest.

If he guesses right the prize money will be increased by Rs. 3 Lakhs. He bets on Keith and Nora.

With a double elimination next week, the contestants will be having a nervous Christmas.

Talha is a Media Student who is Desi at heart. He loves films and all things Bollywood. He has a passion for writing, reading and occasionally dancing at Desi weddings. His life motto is: “Live for today, strive for tomorrow.”
Varun and Kriti are the Young Dilwale
Bajirao Mastani is a Historical Masterpiece