In an interview with DESIblitz, Bollywood actress and fashionista Sonam Kapoor discusses her role and experience in Akshay Kumar’s Pad Man and why menstrual hygiene is such an important social issue.

Combating the stigma of periods and menstruation in India, Pad Man is the latest Bollywood film that attempts to raise awareness of a key social issue that affects millions of women across the globe.

The film is based on the inspirational life-story of Arunachalam Muruganantham.

His incredible story inspired actress and newspaper columnist Twinkle Khanna to write a short story (The Legend of Lakshmi Prasad) based on Arunachalam’s creation. Eventually, the story led to Pad Man, which is produced by Twinkle and stars her husband, Akshay.

Also starring in the comedy-drama is A-lister and fashion queen Sonam Kapoor, who has been on a roll since the success of her award-winning film Neerja (2016).

Sonam gets candid with DESIblitz on her role in Pad Man and tells us why menstrual hygiene is such an important issue.

A Movie to Break Cultural Stigma of Menstruation? 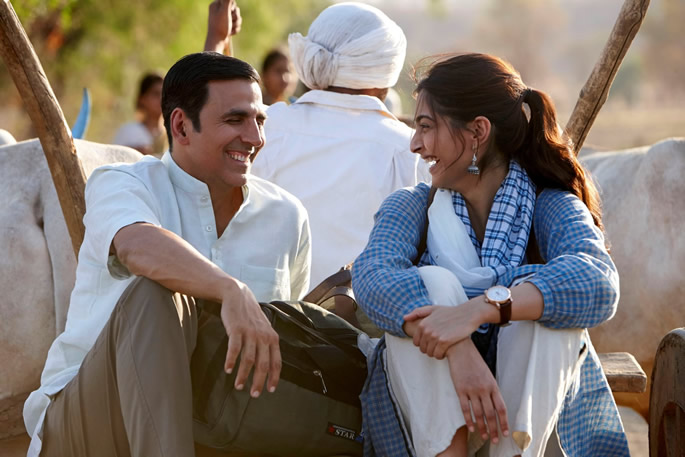 Pad Man does much to uncover the struggle that many rural and poor Indian women face on a daily basis when it comes to periods and menstruation.

The most remarkable point about Pad Man and Arunachalam Muruganantham’s story is that his wife would use a dirty rag cloth because they could not afford a sanitary towel. Many rural women don’t have access to pricey sanitary towels on a regular basis. Instead, they make do with unhygienic old rags, sand, or leaves.

Spotting this issue, Arunachalam invented a machine that would produce low cost and high-quality sanitary napkins. This was not without its challenges, however, as the stigma of periods in India means that educating women and girls about menstrual hygiene can be met with backlash.

Especially in particular religions, a woman may not be able to enter a temple or participate in rituals if they are on their periods.

Considering that the menstrual cycle is also a cultural issue, could Pad Man ruffle feathers in Indian society?

Sonam tells DESIblitz: “Hopefully [the movie] starts a dialogue and normalises the idea of a period and menstruation.” 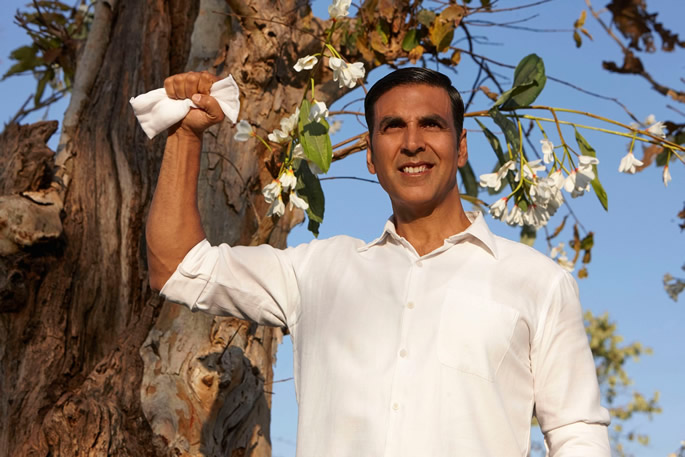 She further mentions: “It’s a natural thing as 50% of the world goes through it.

“You and I wouldn’t be around if women did not get their period [laughs].”

Periods being a taboo in India also raised the eyebrows of Akshay’s spouse and the film’s producer, Twinkle Khanna. She discussed the agenda of Pad Man with the BBC, saying:

“I think the taboo run of menstruation is not just in India, it’s a global problem. I wrote a book on this, but unfortunately, we are a world of viewers and not readers.

“So, I thought that the best way for this to penetrate into most households would be to make a movie.” 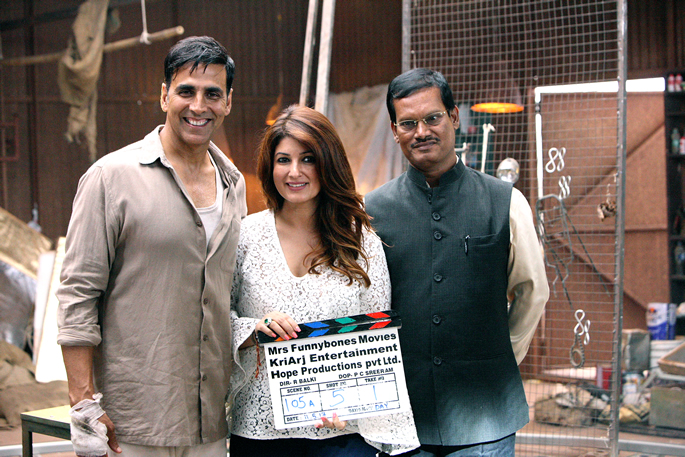 The producer and the cast have also begun a #PadManChallenge on social media, where Bollywood celebrities have been posing with sanitary pads in order to break down the stigma.

Deepika, who is seeing huge success with the release of Padmaavat, posted on her Instagram:

“Thank you for tagging me @akshaykumar ! Yes, that’s a Pad in my hand & there’s nothing to be ashamed about…It’s natural! Period. #PadManChallenge.” 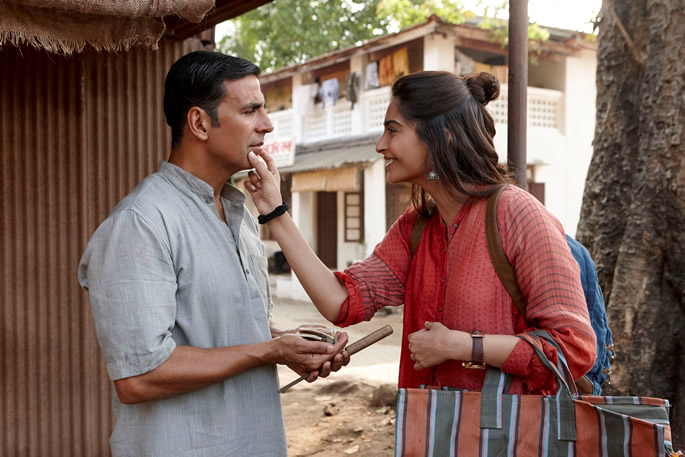 Undoubtedly, Sonam Kapoor is one of the most succinct and stylish actresses we have in Bollywood today.

As such, Kapoor has played various roles throughout her career. Whether it’s the immaculate princess in Prem Ratan Dhan Payo (2015) or con-bride in Dolly Ki Doli (2015) Kapoor always endeavours to be different.

But regardless of how her films fare at the box-office, the 32-year-old actress never fails to stun the world with her bespoke fashion sense. After all, she is called a fashionista for a reason!

In Pad Man, Kapoor plays a young woman called Rhea who is a beacon of change for Lakshmikant Chauhan (played by Akshay Kumar) within the movie.

Lakshmikant faces considerable backlash from the community when he attempts to revolutionise menstrual hygiene for millions of rural Indian women. Eventually, it is Sonam’s character who encourages him to pursue the social cause against all odds. Talking more about her role in the film, Sonam tells DESIblitz:

“She is a very progressive, modern and young woman who sees the potential in him and decides to support it [the cause].”

No matter how serious a subject is, the experience of working with Akshay Kumar is always fun. After more than 7 years since Thank You (2011), Kapoor reunites with Kumar on celluloid. Reflecting on her acting experience with the Khiladi himself, Sonam expresses:

“He’s always so much fun and is such a good person. He has such a dynamic personality and is great to work with.”

Sonam had similar praise for director R. Balki. The filmmaker is known for creating films that follow the journey a dedicated ordinary person as they pursue a mission or important cause.

Ki & Ka (2016), for instance, raises the question of gender roles and equality within Indian society. Arjun Kapoor undertakes the role of a housewife, while Kareena Kapoor plays the breadwinner.

Interestingly, the gender-role also forms the crux of Pad Man, as Akshay’s character wears the sanitary pads in order to test them out. Sonam tells us:

“R. Balki was amazing to work with. He is a very compassionate person, very broad-minded and he thinks very differently to everybody else that I work with.”

Listen to our full interview with Sonam Kapoor here:

Generally, Pad Man promises to be yet another project that both educates and entertains the audience.

One must appreciate R. Balki, Twinkle Khanna and team for bringing a hush-hush topic like menstruation to mainstream attention.

Perhaps, it is films like these that could be the breath of fresh air for Bollywood?

Be sure to catch R Balki’s Pad Man at a cinema near you on 9th February 2018!

Anuj is a journalism graduate. His passion is in Film, Television, dancing, acting and presenting. His ambition is to become a movie critic and host his own talk show. His motto is: "Believe you can and you're halfway there."
Sooraj Pancholi Charged over Actress Jiah Khan’s Death
Mishqah Parthiephal: The Indian Detective & South African Desi Culture