"Until we start talking about menstruation, we cannot affect any legitimate change"

Children still snigger when a girl has that stray period stain on her uniform.

Employed women still hide pads in their pockets or in handbags while making the trip to the toilet at work.

A considerable number still shy away from asking the male friends or family members to buy them pads and tampons.

However, these are problems of privilege. Scores of women the world over still do not have access to any sort of sanitary products.

Conversations about menstruation are rarer, considering the stigma of impurity, disgust and shame associated with it.

UK-based charity Binti is trying to set that record straight with awareness events sprinkled through the year.

The charity’s latest attempt at raising money and awareness about the cause was a fashion show and auction held in London on 28th June 2018. 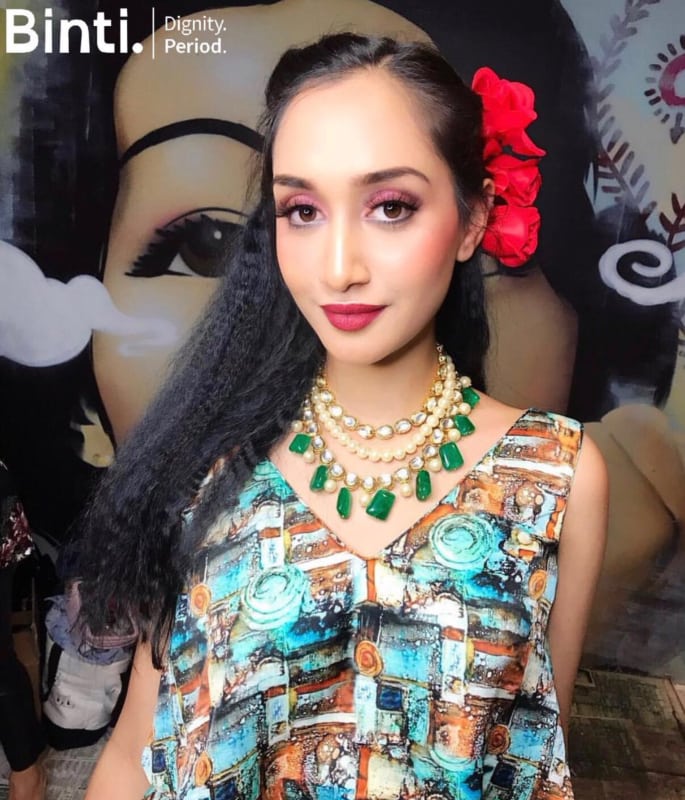 Have you heard of the old traditional Punjabi wedding custom, Jaago?

Relatives of a soon-to-be-wed couple would go around their village the night before the wedding day.

They would carefully carry a pot decorated with candles on top, singing and dancing as they openly invited everyone they saw.

Back in the days of no electricity, this was an ingenious way to pump up a wedding.

However, onlookers at Old York Road were in for quite a shock when a large group of ‘Desis’ walked around with these pots.

Desis sure know how to draw attention. @ManjitGill, Founder and CEO of @binti_period seen here doing the Jago. The aim of this exercise was to get people to #SmashShame surrounding menstruation and start talking about it. #Menstruation #Periods #BintiPeriod pic.twitter.com/P8XxCdbl8T

The objective was to shirk off inhibitions and discuss and celebrate the natural process of menstruation sans shame.

We liked the zari-embellished denim shorts and the quirky headgear featured during her segment.

His line featured a range of fabrics from cotton to satin and silk. With flowing lehenga skirts and sheer capes, we also saw the dominance of the rose motif in his work.

Later in the evening, a special auction of limited edition artwork by Rehal was also held.

“We have been working on the product for a while now and planning this event for a year,” explains Manjit Gill, Founder and CEO of Binti.

The underwear is designed to suit places with limited toilet access. It also seeks to help women who cannot afford mainstream period products.

The charity claims that three pairs will give girls enough protection to manage their menstrual cycle.

For those with a heavier cycle though, the product will come with additional pads for extra protection. The string clasps on either side of the hip facilitate faster changing too.

Despite their importance in a woman’s life, environmental concerns make sanitary pads a big ecological villain. 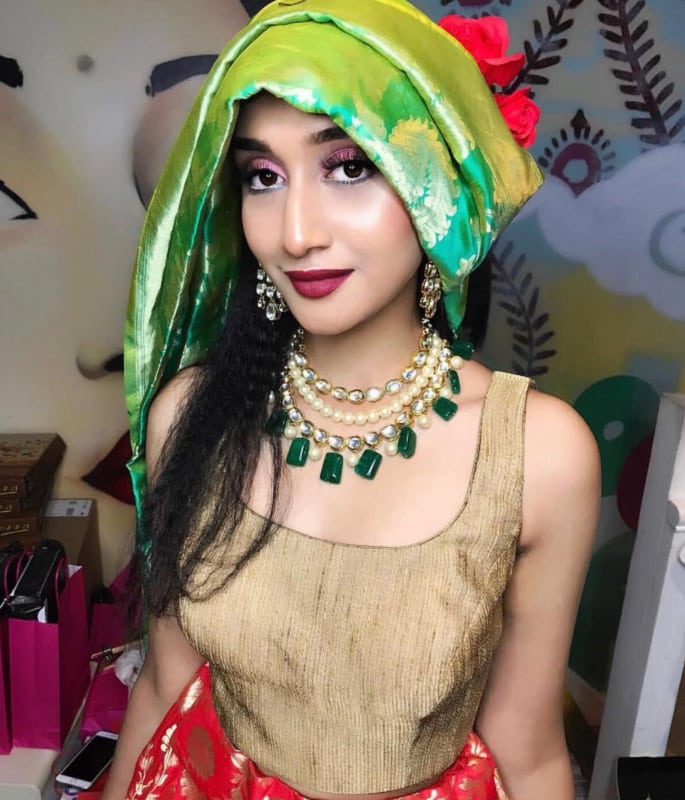 Binti’s new period underwear seeks to tackle that as well.

Made from local and eco-friendly material like bamboo fibre, the garment is easy on the environment, highly absorbent, fast to dry and easy to wash.

Its shelf life of 2 years means a considerable amount of sanitary waste can be avoided.

Gill also hopes to facilitate self-sufficient pockets of women-oriented industries with this product:

“In regions like India and Africa, we want to partner or create cottage style workshops where women will be hired to make the underwear locally.”

“If sustainable employment can come off something like this, why not?”

Menstruation Taboo: The Consequence of Silence

According to a Deccan Chronicle piece, the National Family Health Survey 2015-16 stated about 62 per cent women in the age group 15-24 years still rely on a cloth during periods.

“With over 3/4 of girls in India using rags during their periods, Binti addresses this within its education programme. We highlight the best ways to clean and store these rags to ensure girls and women have safe and healthy periods, rather than bring on any diseases. #BintiPeriod #SmashShame #MenstruationMatters #PeriodMonologues #Donate #Kaur #Zakat #Health #Education #FutureIsFemale

This takes away the opportunity to have an open discussion about periods and other related issues within the comforts of our own houses.

Anita Goyal, director of the Hemraj Goyal Foundation and one of Binti’s patrons echoes this sentiment:

“What does the sentence ‘I am on’ mean? It is a biological process! How hard is it to normalise the conversation about menstruation? It is one the world needs to hear “

In countries like India, menstruating women are still isolated from places of worship. Nepal still has the mud-hut practice despite it being condemned and criminalised.

While British women are switching to plastic-free period products, on one hand, others are still grappling with the pressures of period poverty.

The fact that sanitary products are taxed in places like the UK, India and many others doesn’t help the cause. 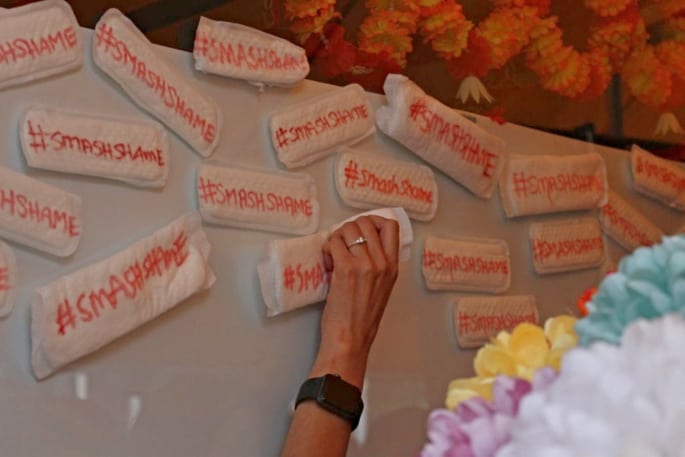 Even Bollywood stirred still water when Pad Man came out.

The movie and the marketing surrounding it saw the entire Hindi film industry trigger a conversation about normalising pads. Is it enough though?

“Until we start talking about menstruation, we cannot affect any legitimate change. If enough people speak up and do their bit, the tables will turn.”

Mankind and Media to Menstruation’s Rescue

One of the most striking parts of Binti’s event was the male attendance. Manjit Gill was grateful for the turnout:

“I am proud of the men who have turned up. Men need to come on board and drive the message home. That’s smashing shame,” she said.

Anita Goyal explains how times have changed with an example from her own household:

“My daughter was in the hospital when she got her period. I had to stay with her as she was heading for an operation. So, I asked my husband to go buy sanitary towels for her.

“There was no shame in asking him this, considering we have been involved in activities like this. Before, I would have gone myself. Now men ask us which type and size to buy. That’s very encouraging.”

Binti owes its success to smart social media marketing. The charity is big

The big plus point of going social is youth participation:

“I took notice of Binti’s work through their brilliant online presence. Social media also helps get the young people out there involved in a cause like this. It’s easy to channel the passion and zest for change into actual good work,” notes Goyal.

“We have volunteers in 13 countries and that’s been possible only because we’ve reached out online. There is a power in the medium and we want to use it to help women dealing with issues that shouldn’t be problems in 2018,” adds Gill.

The road ahead looks interesting for the charity as the fashion show and awareness drive moves to India and Canada soon.

Manjit, however, saves the excitement for another upcoming product launch – the digital period underwear.

An upgrade on the product they have released, this underwear seeks to make menstruation leak-free:

“You can ask any woman anywhere in the world what her biggest period fear is. She will say leaks. So, we decided and are in the process of developing a special digital period underwear for women in the UK.

“This is connected to an app on your phone and will tell you when it’s time to change,” Gill says.