Bol Bachchan a smash for Abhishek

With a fantastic opening weekend for Bol Bachchan, Abhishek Bachchan has proven is here to stay. The film’s box office reports have been outstanding. The cast Abhishek Bachchan, Ajay Devgan, Asin Thottumkal and Prachi Desai have all received praises for their performances.

the film grossed in Rs. 43 crore on its opening weekend

Abhishek Bachchan has proved to all of his critics that he is going no where, and that he is here to stay with box office smash hit Bol Bachchan, which is directed by popular Rohit Shetty, who is most famous for the Golmaal series, and last year’s smash hit Singham, which starred Ajay Devgan. 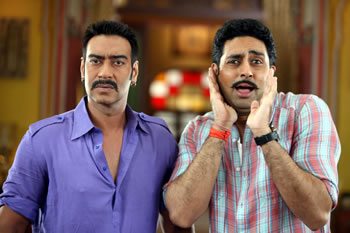 Bol Bachchan has action, a lot of comedy, romance, catchy music by Himesh Reshamiya and Ajay and Atul, and has been written by the talented Sajid and Farhad who had written the blockbuster Housefull 2.

Abhishek Bachchan who is 36 years old debuted in 2000 with JP Dutta’s Refugee. After Refugee he unfortunately had a run of flop films including Sharart, LOC Kargil, Tera Jadoo Chal Gaya and many more. It was not until 2004 he starred in Mani Ratnam’s Yuva in which he got critical acclaim for his role.

After Yuva he had many hits such as Dhoom, Bluffmaster, Sarkar, Dus, Kabhi Alvida Na Kehna and more. He then faced box office rejection with Jhoom Baraber Jhoom in 2007 and then that started his string of flop films again. His reign of flops films lasted only a year until he starred in the hit film Dostana starring John Abraham and Priyanka Chopra. Since then he has had some films work at the box office but then the others failed.

In 2012, Abhishek starred in Abbas Mustan’s Players which again failed at the box office and critics began to doubt Abhishek as an actor. However, when Bol Bachchan was released he silenced those critics when the film grossed in Rs. 43 crore on its opening weekend (£6.3 million).

Here is the official trailer to the film:

The success of the film and Abhishek’s performance got a lot of celebrites excited and many tweeted on Twitter:

Sujoy Ghosh ‘go see BOL BACHCHAN if you can. I loved Ajay Devgan & Abhishek Bachchan in it. perfect timings. even the rest of the cast. spot on.’

Rohan Sippy: ‘+100 RT @sujoy_g: my respect to Sajid, Farhad & Yunus, writers of BOL BACHCHAN, they make it look so easy. I know how hard it is to write.’

Trade analyst Taran Adarsh gave the film 4/5 stars and on his Twitter he posted the breakdown of the box office collections over the weekend “Rs 43.10 cr in its opening weekend. Breakup:- Fri 12.10 cr, Sat 14 cr, Sun 17 cr.”

Bol Bachchan is also produced by the likes of Ajay Devgan and this is his next venture as a producer since the hit film All the Best which again was directed by Rohit Shetty.

Whilst Bol Bachchan was filming Abhishek Bachchan injured himself on set and tore a muscle in his back. When the injury happened he tweeted “Thank you all for the get well soon wishes. Yes, have a muscle tear in my lower back. Got injured training in the gym.”

He also suffered another injury when he fell from a Rickshaw for a sequence in the film. He on Twitter said “Had a fall whilst filming a small action sequence in Jaipur. Have come back to Mumbai now and will resume work at the earliest… I will be fine. Can’t say the same for the rickshaw!!! Banged him up good! Hehe…Thank you again for all the get well soon messages. The MUST and WILL go on. Lots of love and gratitude.”

His father Amitabh Bachchan also commented on the incident on Twitter ‘Abhishek’s had an accident on set in Jaipur, has just flown back .. 6 stitches near eye .. Is well .. Will take some days to recover.’

The film is an official remake of Hrishikesh Mukherji’s Gol Maal which was made in 1979. Most of Bol Bachchan was shot in Jaipur and the rest was in Goa.

Will 2012 be a good year for Abhishek after Bol Bachchan? Will he be able to sustain it with his future releases? Is Bol Bachchan a come back movie for him?

What did you think of Bol Bachchan?

Amit enjoys creative challenges and uses writing as a tool for revelation. He has major interest in news, current affairs, trends and cinema. He likes the quote: "Nothing in fine print is ever good news."
Gandu ~ Sex, Drugs and Rap
Tooting Broadway ~ a Tamil Thriller