‘Never Have I Ever’ hits Top of the Netflix UK Chart

Netflix’s ‘Never Have I Ever’ has found success with its second season, reaching the top of the streaming platform’s UK chart.

Netflix’s Never Have I Ever has found success with its second season, reaching the top of the platform’s UK chart.

Never Have I Ever tells the story of Devi Vishwakumar, portrayed by Maitreyi Ramakrishnan.

Narrated by former tennis star John McEnroe, the series shows Devi as an Indian girl navigating her way through teen life in a modern Western environment.

Devi is a straight-A student at a Californian high school.

Season one of Never Have I Ever saw Devi on a mission to become popular and get a boyfriend.

However, the season ended with her getting more than she bargained for, as she found herself in a love triangle with Ben Gross (Jaren Lewison) and Paxton Hall-Yoshida (Darren Barnet).

The first season also ended up at the top of Netflix’s charts, much to co-creator Mindy Kaling’s delight.

She took to Instagram shortly after the news broke that it was the most popular show on Netflix in ten different countries.

“I’m truly in shock. I can’t believe that our show about a complicated little Indian family has been seen by this many people.

“@loulielang, the entire cast and crew are so grateful to you for making us #1 around the world on @netflix. We love you guys! Thank you!.”

Since its release on July 15, 2021, season two of Never Have I Ever has received the same success.

It is currently ranked second in the Netflix UK chart.

We also continue to see Devi work through the grief of losing her father while tackling life in an American school and an Indian household. 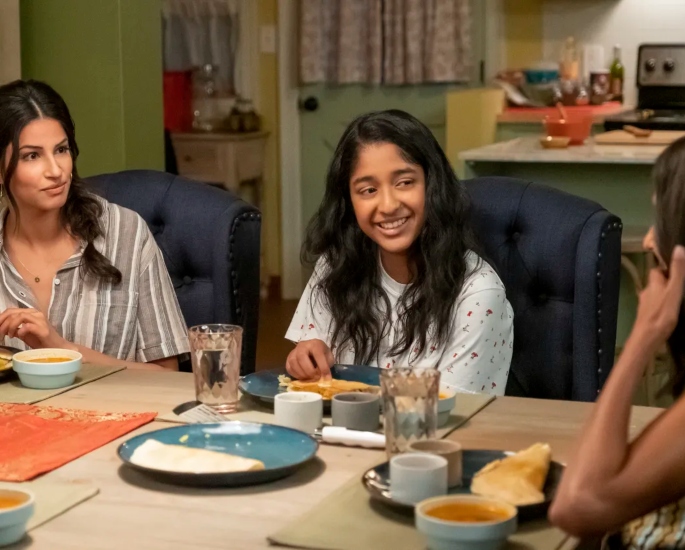 Never Have I Ever features a widely diverse cast, and every role has an equally important part in Devi’s story.

After the release of the first season, Darren Barnet discussed the creation of his character Paxton Hall-Yoshida.

Barnet explained how his Japanese heritage was incorporated into his character. He said:

“My character’s name originally was Paxton Hall. But when Mindy caught wind that I was speaking Japanese, Mindy and Lang came up to me.

“They were like, ‘Hey, were you speaking Japanese with our AD? Do you mind if we make your character match what your real ethnicity is?’

“I was like, ‘I love that’, and that’s when Paxton Hall-Yoshida was born.”

Season two of Never Have I Ever also introduces a new student in Devi’s friendship circle.

Aneesa (Megan Suri) is a charismatic Indian teen with a wave of confidence that Devi wishes she had.

The platform described Aneesa as “a new Indian student at Sherman Oaks High, whose confidence and radiance will pose an immediate threat to Maitreyi Ramakrishnan’s Devi”.

Throughout season two, viewers will not only see Devi navigate school, friendships and grief, but also the issues that surround her family.

Fans are able to see Devi’s cousin Kamala battle her way through a PhD at CalTech, as well as her mother Nalini moving on from the death of her husband.

Mindy Kaling and Lang Fisher have worked to tell a story of a first-generation Indian-American girl that sparks tears of laughter, sadness and joy.

Seasons one and two of Never Have I Ever are currently available to watch on Netflix.