Priyanka Chopra has taken the No.1 spot in The Hollywood Reporter’s Top Actors chart. She hails as the only Bollywood star to feature in the Top 10 list!

She also hails as the only Bollywood celebrity to feature in the Top 10 list.

Priyanka Chopra has reached the top spot of the Top Actors chart, making her as the most popular star on social media.

She has beaten famous Hollywood and Bollywood stars for the top spot.

The new chart, which began in June 2017 by Hollywood Reporter, placed the Bollywood actress at the No. 1 spot. Driven through social media, it compiles the most popular stars on a number of platforms, such as Facebook, Twitter and Instagram.

By analysing data on social media, provided by MVPindex, it combines engagement and interaction with weekly additions of followers.

While last week witnessed Dwayne Johnson taking the lead, he has been knocked down to No.2 by his Baywatch co-star. Zac Efron also appears on the list, holding the No.9 spot.

But Priyanka Chopra has also beaten other well-known actors, such as Vin Diesel and Wonder Woman herself, Gal Gadot. She also hails as the only Bollywood celebrity to feature in the Top 10 list. Legends such as SRK and Aishwarya Rai Bachchan do not feature at all!

Many commented on the post to share their congratulations to the star, some even saying: “You deserve this.”

Priyanka has recently been touring around the world, promoting her new Hollywood film Baywatch. DESIblitz had the chance to meet up with the beautiful actress, where she talked about her role as Victoria Leeds.

Meanwhile, she has proven to fans why she has taken the No.1 spot in the Top Actors chart. She recently wowed with an elegant, pastel blue dress, following similar trends made over the weekend from the likes of Kangana and Isabelle. 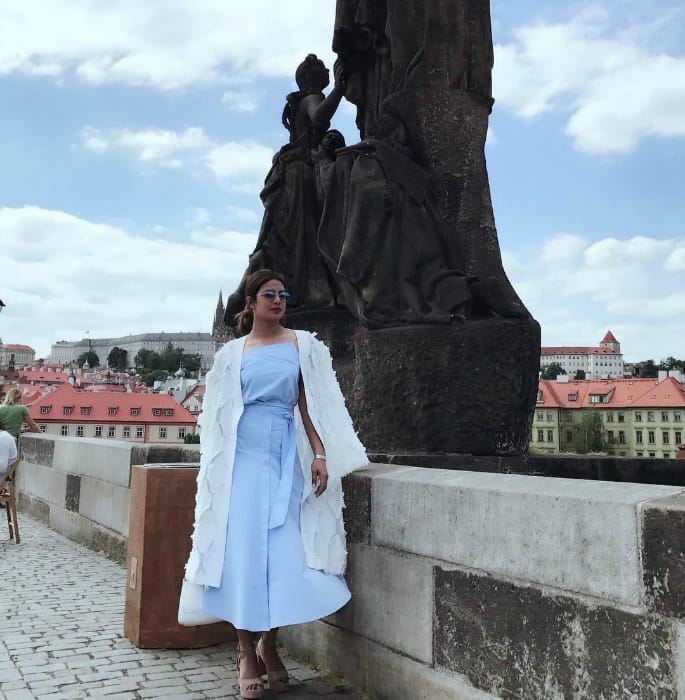 Visiting the historic city of Prague, she toured around some of the city’s famous landmarks such as the Vltava river.

And now after taking the top spot of Hollywood Reporter‘s list, we wonder if she will keep it in future weeks to come!

To check out the full Top Actors chart, visit the list here.