A British Pakistani from Birmingham, Muhammad Zaroof, has been arrested at Karachi airport trying to smuggle 18kg of heroin out of Pakistan.

A British Pakistani man, Mohammed Zaroof, from Birmingham, was arrested at Jinnah International Airport in Karachi, Pakistan, for being in possession of drugs in his luggage.

They then suddenly honed in on him to arrest him with his trolley which had the bag containing the narcotics.

Upon arresting him the special forces officers searching his bag open up smaller black packages containing 18.785 kg of heroin, which he was transporting out of Pakistan.

According to Dunya News TV, the officers intercepted Mohammed Zaroof with the concealed drugs haul when he was on his way to Birmingham via Dubai

Sources say that the approximate value of the recovered drugs on the international market is approximately Pakistani Rs 7 million.

Zaroof was then subjected to a lengthy interrogation which questioned him to find out which drug crime network he was working for as a drugs courier. 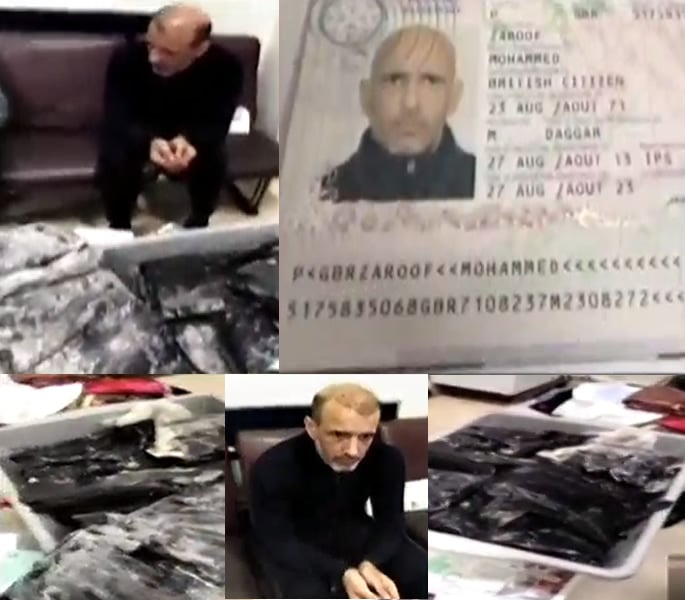 The fact that he was carrying a substantial amount of heroin, leads them to believe he is peddling drugs for a crime syndicate in the UK and possibly Birmingham.

The British national was detained at the airport after questioning.

Zaroof has been remanded in custody by the special forces.

A case has been registered against Mohammed Zaroof, who is the son of Mohammed Yousaf, and a full investigation has been launched into the case.

Officials are determined to find out the real destination for the drugs and the source in Pakistan.

This case comes weeks after a British Pakistani woman, named Kausar Younes, was arrested on March 24, 2019, for trying to smuggle heroin out of Pakistan.

Younes was concealing £700,000 worth of the Class A drug in her luggage and was caught by the Anti-Narcotics force who became very suspicious of her.

She was trying to transport the drugs via Vienna, Austria and then into the UK.

She was arrested at the departure lounge of Islamabad International Airport with three bags after she had managed to get her luggage through the initial checkpoints.

The heroin Younes was carrying was concealed in leather in liquid form when it was discovered by the officials.

Whereas, the drugs being taken by Zaroof were packaged into his suitcase in black packs in powder form.

Nazhat is an ambitious 'Desi' woman with interests in news and lifestyle. As a writer with a determined journalistic flair, she firmly believes in the motto "an investment in knowledge pays the best interest," by Benjamin Franklin.
Indian Man kills Wife for Watching Movies All Night
East London Gang convicted of Attempted Murder in Street