A gang of men from East London have been charged and convicted for the attempted murder of a 22-year-old in a busy street in Tower Hamlets.

Three men from a gang from East London have been convicted for attempted murder after they were found guilty of stabbing a man in a busy street in Tower Hamlets.

Their trial at the Old Bailey heard that Alomgir Shahriyar, aged 23, Mohammed Habib Ali, aged 23 and Shakeel Chowdhury, aged 22, were accompanied by a fourth gang member, Sallah Ali, aged 19 during the attack on the 22-year-old victim.

On Friday, June 1, 2018, Sallah Ali was stopped by police shortly after midday and subjected to a search for drugs. Ali challenged to officers during the stop and immediately claimed that the victim had set him up.

Later on the same day, Ali contacted Shahriyar and Mohammed Habib Ali, telling them what happened. This escalated into the events which led to the attack on the victim.

At about 5.30 pm that day, the victim was called by Ali and was accused of being a snitch. He then arranged for the victim to meet him.

Then just before 6.00 pm, the victim arrived on Cable Street, E1, and met Sallah Ali. Suddenly, then as pre-arranged amongst the gang, Shahriyar, Chowdhury and Mohammed Habib Ali, all turned up on the spot.

The victim was now feeling threatened by the gang and their behaviour towards him. Within seconds, Shahriyar, Chowdhury and Mohammed Habib Ali, started to attack him with knives. 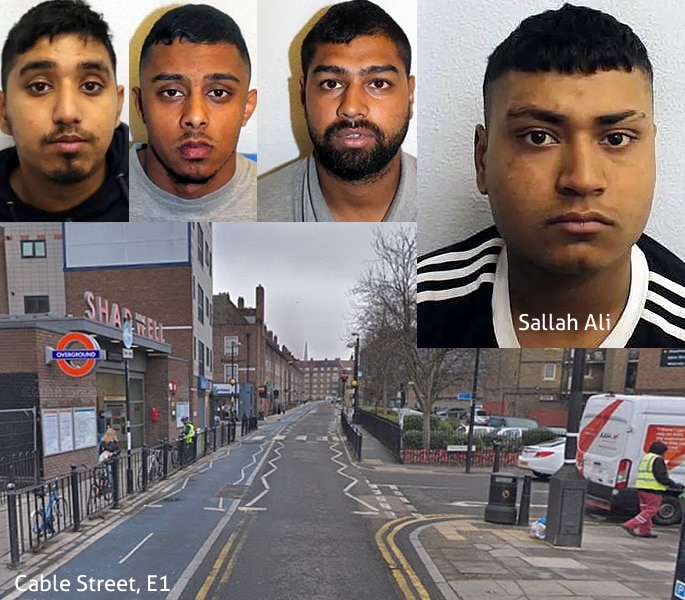 After sustaining multiple stab wounds, the victim collapsed and fell on the path in the busy street.

A witness who saw the attack knew the victim and quickly contacted the victim’s brother telling him what took place and also emergency services were called to the incident.

After the attack, the gang quickly fled the crime scene in a taxi.

Later they called the victim’s family with Mohammed Habib Ali admitting to them that he stabbed the victim and the others threatened them not to say anything to the police.

However, police acted quickly and launched an investigation into the attempted murder and arrested the gang. All four of them were charged.

On Wednesday, April 10, 2019, at the Old Bailey, Alomgir Shahriyar, Mohammed Habib Ali and Shakeel Chowdhury were all found guilty of attempted murder and Sallah Ali was found guilty of Grievous Bodily Harm for his role in the attack.

“This was a shocking attack in the middle of a busy street in broad daylight.”

“The victim received multiple stab wounds and, according to the surgeon who operated on him, if he had arrived at hospital seconds later he would have died.

“He has received injuries that will stay with him for life, leaving him no longer able to walk.

“Violence has no place on our streets – I hope these convictions send a strong message that it will not be tolerated and those responsible will be arrested and put before the courts.”

The gang of four men convicted will be sentenced at the Old Bailey in May.

Nazhat is an ambitious 'Desi' woman with interests in news and lifestyle. As a writer with a determined journalistic flair, she firmly believes in the motto "an investment in knowledge pays the best interest," by Benjamin Franklin.
British Pakistani arrested with 18kg Drugs at Karachi Airport
Gujarat Man to Marry Two Women in India