A 25-year-old mother from Guyana has been charged with the attempted murder of her six-year-old daughter after she beat her.

Drupattie Balkarran, aged 25, of East Canje, Guyana, has been charged with the attempted murder of her daughter.

Balkarran, also known as Natasha, appeared before Magistrate Renita Singh at the New Amsterdam Magistrate Court on January 8, 2021, where the charge of intent to commit murder was read.

On December 13, 2020, Balkarran brutally beat her six-year-old daughter with a piece of wood, rendering her unconscious.

Shania was later found after her grandfather raised an alarm. She was found approximately 500-feet from where she lived.

In a statement, Police Headquarters had said that the child’s parents are separated and her father was granted visitation rights every Sunday.

It was alleged that Steve Ramsarran contacted Balkarran at around 8 am and made arrangements to collect Shania.

According to the mother, she prepared her daughter for her father to pick her up and left her in the yard playing.

When Mr Ramsarran arrived, Shania was nowhere to be found. A search party was formed and the girl was found by her grandfather at 2 pm covered in mud.

She was laying on her side with her thumb in her mouth. 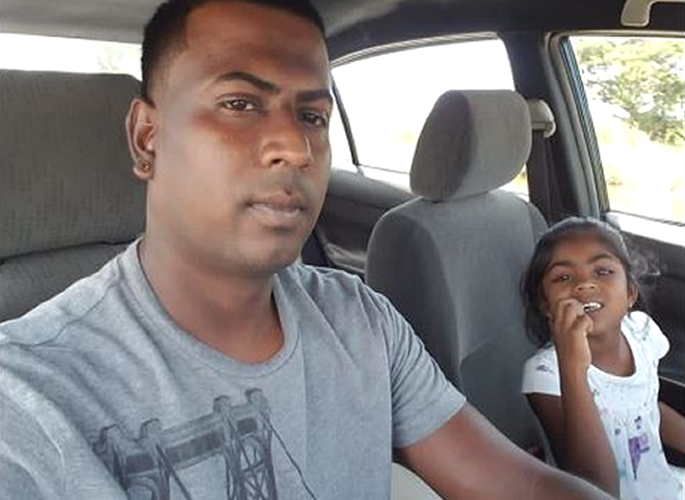 Shania suffered a fractured skull and facial injuries. She was taken to Georgetown Public Hospital where she woke up three days later.

During questioning by police, the mother said that she struck Jenita Ramsarran, known as Shania, to the back of her head because she continued to “run around” after being told not to.

Balkarran said she was taking her daughter for a walk when the incident occurred. Shania immediately collapsed after being hit with the wood by her mother.

Due to fear, Balkarran left her daughter in a swamp and returned home.

She told investigators that she thought Shania was dead.

Police found a piece of wood near where Shania was found and they suspected it was used in the attempted murder.

In court, Balkarran was charged with attempted murder and placed on $300,000 bail.

In his objection to bail, prosecutor Pravan Sayhu said that Shania is still traumatised and the accused may want to tamper with witnesses and that she also confessed.

He also said that the police is ready to go ahead with the matter.

Mr Ramsarran told the court that his daughter is recovering but remains traumatised. He said that a second CT scam took place recently and it showed that Shania still has a fractured skull.

The News Room reported that Magistrate Singh told Balkarran to stay 100-feet from her daughter and to have no contact with her.

The case was transferred to Reliance Magistrate’s Court for disclosure on January 27, 2021.