A man has been arrested by Sindh police for advertising a “Dirty Night (couple swapping)” event on social media to take place in Karachi, Pakistan.

Couples were told to wire the money in advance

A man from Sindh province in Pakistan has been arrested for promoting a fake Karachi’s “Dirty Night (couple swapping)” event on social media and making a lot of money from would-be attendees.

The man, allegedly known as Arsalan Qamar from Clifton, Sindh, was putting out ads daily for these events on social media and they gradually gained attraction, becoming viral with shares.

As many as 44 people had confirmed they were attending with 245 others showing distinct interest. Indicating that such adult swinging activities were of definite interest to liberal-minded Pakistanis.

The price for couples to attend this ‘night of couple swapping’ was said to be Rs 25000 (approx £142), which is a lot of money in terms of Pakistani currency.

Couples were told to wire the money in advance in order to reserve their booking for this night of adult entertainment and pleasure. 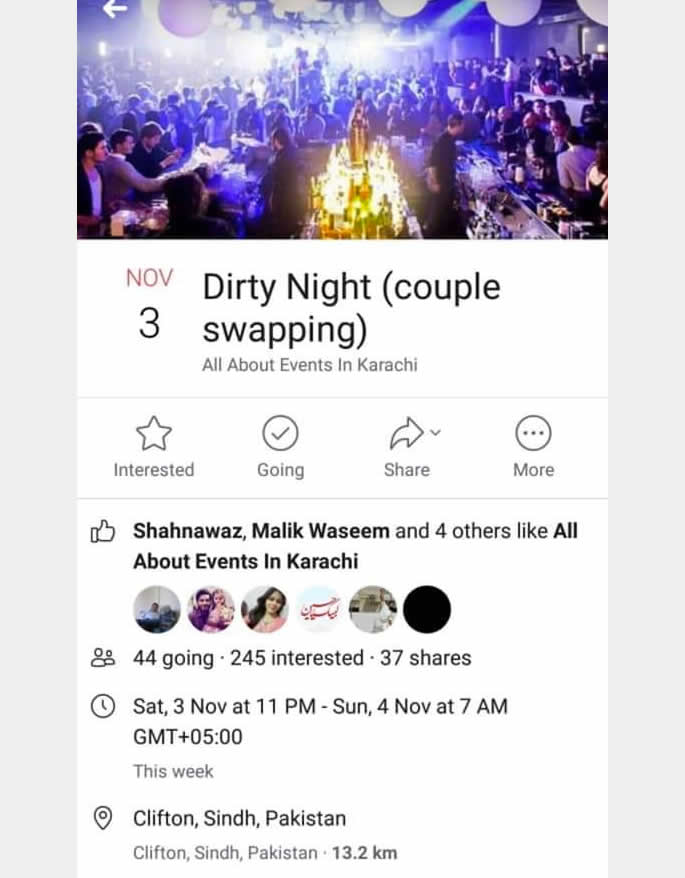 Sindh police tracked down the man and arrested him at Khyber Hotel Saddar in Karachi on Sunday, November 4, 2018, and found cash in his possession.

Qamar’s arrest was on two counts.

One, for the idea and premise for the unlawful event and secondly, for scamming people out of money by promoting a fake event.

Qamar is thought to be a member of a gang involved in running a “dirty campaign” on social media according to Clifton Superintendent of Police (SP) Suhaee Aziz.

During his police interrogation, it’s reported that Qamar told police that this was not his first event campaign.

He had been running such “fake programmes’ on social media which led to him allegedly making substantial sums of money.

A First Information Report (FIR) was lodged against Qamar under Section 420/25-D of Telegraph Act.

Police efforts were now going to focus on finding other culprits.

In this instance, the event advertised was for a scam. However, these adverts and campaigns for couple swapping and associated sexual acts are not the first of their kind.

According to media reports, many such adverts appear on websites daily offering different “deals” to Pakistani couples genuinely interested.

Nazhat is an ambitious 'Desi' woman with interests in news and lifestyle. As a writer with a determined journalistic flair, she firmly believes in the motto "an investment in knowledge pays the best interest," by Benjamin Franklin.
Indian Girl beheaded after Refusing Sex with Neighbour
Drug Dealer caught with £10K in Gucci Bag and Luxury Lifestyle