DESIblitz looks at the successful Food Entrepreneur Geeta Samtani, who has gained worldwide recognition for her creation of popular Indian food products.

"If you can find the courage to pursue your dream, your productivity will soar.”

These secret recipes have been passed down through generations, using natural ingredients to create the best tasting foods.

Geeta Samtani grew up in Mumbai, India where she studied Law at university. Her journey began when she moved to Trinidad in the 1960s, with husband Beni who was very much involved in the Bollywood industry as a film distributor.

There were plenty of mango trees in the Carribean and Geeta, who is a passionate cook, mastered her family recipe of mango chutney. Soon news of her popular chutney spread among friends, who gave Geeta heaps of praise after tasting it. 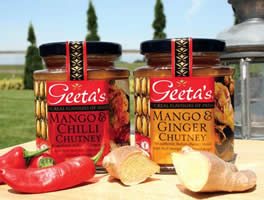 Speaking of her famous chutney, Geeta says: “I used to make them for friends and family and also sell them for charity. But then the demand got so high that I couldn’t keep up with it. So the orders were enough for me to feel confident that I could turn this into a viable business venture in 1990.”

After migrating to the UK in 1979, Geeta’s business took off in a big way in the early 90’s. She started selling her products at fairs and bake sales, and with the encouragement of friends, she began selling to premium stores such as Selfridges.

After a short while, Safeway’s launched the Premium Mango Chutney [one of Geeta’s most popular and loved products], on their supermarket shelves. In 1998 Geeta’s Mango Chutney won the ‘Good Food Retailing Gold Award.’

Explaining why her mango chutney is incredibly popular, she states:

“The recipe had been passed down the generations. It has an authentic, aromatic and very flavoursome taste, with high quality ingredients and just the right balance of spices. There was nothing like it on the market at the time and there still isn’t.” 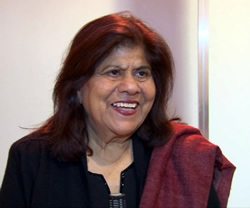 Over the years, Geeta kept true to her roots by travelling back and forth to India for inspiration, especially keeping up to date with the latest revelations in Indian cooking. Geeta is certainly very passionate about what she does.

Geeta’s management team includes her husband Beni and their eldest daughter Anita, who has been groomed up to take the family business forward. In line with family tradition, Geeta has passed her secret recipe onto her daughter.

According to Anita, Geeta’s Foods still operates the same way as when the company started. Her pickles and chutneys are all made in Gujarat, India and her sauces are made in Abercarn, Wales. The products are then manufactured and bottled in Wales before they hit the shelves of all major retailers and supermarkets.

“The scale is much bigger these days, but we still have total control,” says Anita. “We work very closely with our production colleagues, to the point where they’re part of our family. It’s the same with all our staff. Geeta’s began as a family business; now it’s an extended family,” she adds.

DESIblitz had the pleasure of catching up with Geeta Samtani to find out more about her food journey, including the development process of her products:

Geeta’s managing skills have led to her becoming a thriving businesswoman and a culinary expert. Speaking to the guardian about research and development, she says:

“At Geeta’s, we do a lot of research, but for new product development I follow my gut feeling. I don’t wake up in the middle of the night with a new recipe but I think a lot, and things come to me.”

Geeta also has the expertise of category manager Sally Campbell, and technical and New Product Development [NPD] Manager Dr. Caroline Holroyd. They have worked with Geeta for many years and believe it is the loyalty and relationship that makes the perfect products.

Geeta’s flagship product the ‘Premium Mango Chutney’ hasn’t changed since it was first created, yet Geeta’s Foods continue to bring innovation and the closest authentic experience to homemade Indian food. 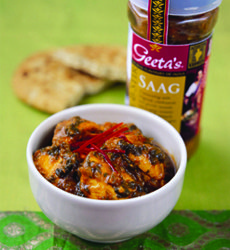 Geeta’s central customers are mainly professional companies of all classes, but this is constantly increasing and widening.

“British consumers are more aware now of what they’re eating and what things are made of, and are prepared to pay more for quality. They’re eating out more, too, so they know about different cuisines, and when it comes to Indian they look to us to help them discover new tastes beyond the obvious,” says Anita.

Geeta’s advice for anyone wanting to make the chutney at home is: “Buy the best fruit and vegetables. Don’t compromise. Do a good blend of spices and put a lot of love into it. Without the latter, nothing will work. Also, follow your own instincts as to what will taste nice.”

As well as creating chutneys, pickles, curry pastes, sauces and spice mixes she has also written a cookbook titled ‘A Taste of Kashmir,’ which is a favourite among those who are new to Indian cooking.

Now, more than twenty years later, her range of products are registered in most UK retailers and are distributed to over twenty countries including USA, the Middle East, Japan and throughout Europe.

Geeta believes that everybody has a passion that they would like to pursue and says: “If you can find the courage to pursue your dream, your productivity will soar.”

Geeta is definitely the driving force behind her company and has become a familiar and well-known face. She has earned herself the reputation of being a culinary expert when it comes to Indian food.

Meera grew up surrounded with desi culture, music, and Bollywood. She’s a classical dancer and mehndi artist who loves everything connected with the Indian film and television industry and the British Asian scene. Her life motto is “do what makes you happy."
Are We too Trusting with What We Eat?
A Journey of India’s Food