A Journey of India’s Food

Some of the culinary secrets and food habits can only be unveiled by personal experience.

With a culmination of various cultures and mores, the Indian diet consists of dishes that combine Eastern, Western, Northern and Southern roots alike.

Here we set you upon a food voyage in the land of diversity to discover some of the gems of Indian cooking that have been accepted and applauded all over the world. 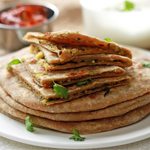 The food bowl of India’s Punjab offers dishes that have now become a staple diet of the majority of north Indian families.

Parantha is one of the many lip-smacking dishes that this state has to offer. A true Indian ‘Dude food’, it is prepared with flour, oil and fillings. This tongue-tantalising dish is an unleavened flat-bread that can be served with curd and copious amounts of butter.

Another dish that is bliss for any meat lover is Butter Chicken. A steaming plate of butter chicken can leave anyone drooling for more. It consists of succulent pieces of chicken in tomato curry with a bountiful amount of butter. Commonly known as Murg Makhani, butter chicken goes very well with Naan and green chutney.

THE REALMS OF RAJASTHAN 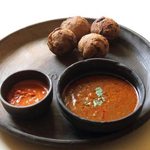 Heading towards the western region of India, we find ourselves among some more interesting cuisines.

First up is Dal Bati and Churma, which is a quintessential dish of Rajasthan.

Bati is unleavened bread which is prepared from whole wheat flour and a filling of various kinds, such as onions and peas. It is commonly served with Dal; a thick stew made from lentils and pulses.

To complete the culinary experience, Churma, which is coarsely ground wheat cooked with ghee and sugar, is served as a dessert.

Then there is Gatte ki Sabzi which is an all-time favourite Rajasthani recipe. Prepared with gram flour dumplings and tangy gravy made of buttermilk and spices, it is best enjoyed with Rotis (Indian bread) and Rice. 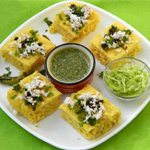 Dhokla is a snack from Gujarat that is quite popular around the country. Dhokla is a highly nutritional ‘quick meal’ that is prepared from rice, pluses, curd and variety of spices.

The batter is steamed to produce a delectable dish which is then served with green chutney and green chillies.

Another feather in the culinary crown of this state is Undhiyu, which is a special seasoned mix vegetable curry eaten with Puri in Gujarati households. 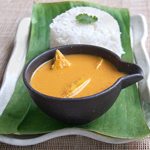 To satisfy the gluttony impulse of people out there, food in Goa, commonly called Goan food, has plenty of options for any food connoisseur.

The dish on top of the list is Sorpatel (spicy Goan pork curry). Prepared with pork liver and spices, this dish surely is a delight to the taste buds. Sorpatel goes well with rice and green salad.

For people who are well seasoned in spicy food, Chicken Cafreal is the dish for them. It is fried or grilled chicken that has been marinated in a spicy coating. Green salad compliments this mouth-watering dish perfectly.

You can also try: Fish curry, Shrimp Curry and Khatkhatem 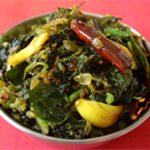 Steering our culinary cruise towards the south, we encounter Amaranths and Coconut Milk Curry.

A traditional dish of Kerala, it is an amalgamation of amaranths (genus of annual or short-lived perennial plants), onions and coconut milk with some spices.

The blend of natural ingredients that are found in nature is a stand-out factor for it. If you hate to see your food add to your waist line then this is the dish for you.

An evergreen Idli Sambar can’t be missed when it comes to southern food. A traditional breakfast in every south Indian household, Idlis are flavourful rice cake made by steaming a batter of fermented black lentils and rice. A vegetable stew that goes by the name of ‘Sambar’ complements the taste of Idlis.

Do dig into: Dosa, Kappa Puzhukku and Rasam 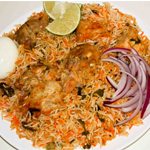 The heritage of Indian cuisine will be put to shame if dishes from Hyderabad are not given their due credit.

Another dish that uses liberal amounts of exotic spices and ghee is Malai Kebabs. An amalgamation of marinated chicken pieces, green chillies, coriander leaves, garlic and almonds along with number of other aromatic spices, this dish can leave anyone craving for more. 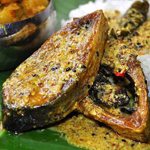 Doi Illish is a traditional Bengali dish. Marinated Illish fish is fried in oil and cooked in a mixture of turmeric powder, chillies, yoghurt and salt. With a hint of turmeric, it is bound to surprise your taste buds.

And the journey continues.

With cultural roots that date back centuries, some of these culinary secrets and food habits can only be unveiled by personal experience.

So, brace your taste buds and gorge on some of the finest food that has made its way into the homes as well as hearts of people in India and the world alike.

Dreamer by day and a writer by night, Ankit is a foodie, music lover and an MMA junkie. His motto to strive towards success is “Life is too short to wallow in sadness, so love a lot, laugh loudly and eat greedily.”
Geeta Samtani an Award winning Entrepreneur
The History of Biryani