the crunchy texture balances out the flavour.

They are some of the most unique food creations as they combine numerous ingredients to create a dish that is full of flavour.

Their incredible taste and textures have seen them become very popular in a number of regions throughout India.

Some of these desserts have even attracted popularity abroad in countries like the UK, USA, Canada and Europe.

But a lot of them are dairy-based, containing milk, yoghurt and ghee. This means that they are unsuitable for vegans.

Fortunately, there are dairy-free substitutes that have a similar taste and texture to the real thing.

This means everyone can enjoy Indian desserts.

These recipes will help you make vegan-friendly versions of your favourite Indian desserts. 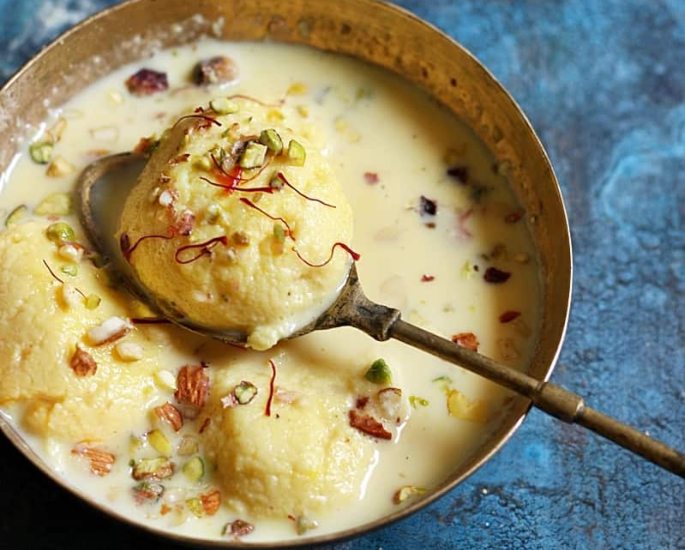 Ras malai is a delicious Bengali delicacy and is a mix of sweet creaminess in every mouthful.

It is a dish that takes time so it is advised to start making this dessert a day in advance to ensure everything is correct.

Every bite of this vegan-friendly alternative is a melt in the mouth moment and it is so delicious, anyone who tries it will want to have more.

This recipe was inspired by Vegan Experiments. 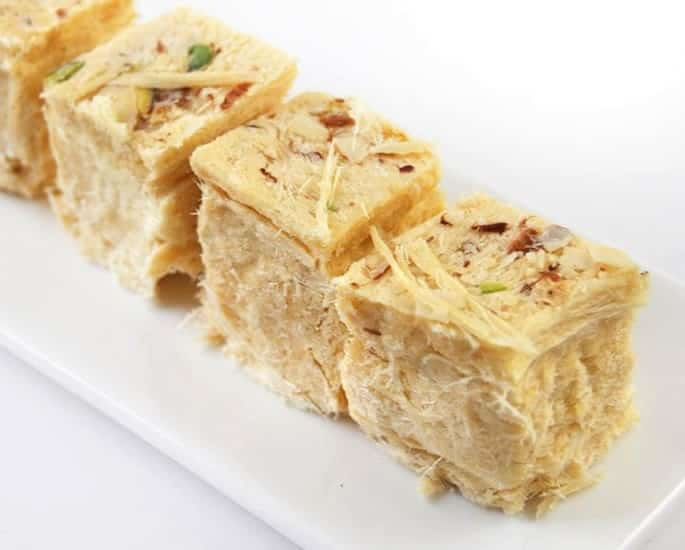 Soan Papdi is a North Indian dessert that will melt in your mouth thanks to its flaky and light texture. It is also known as Patisa.

It uses sugar syrup, ghee, milk and a mixture of gram and refined flour to give it a burst of sweet flavour. It is not too sweet though as the crunchy texture balances out the flavour.

To make it suitable for vegans, simply use vegan ghee and soy milk.

It can be a difficult dish to make as an intensive process is needed to give it its fluffy texture.

This recipe was adapted from Times of India. 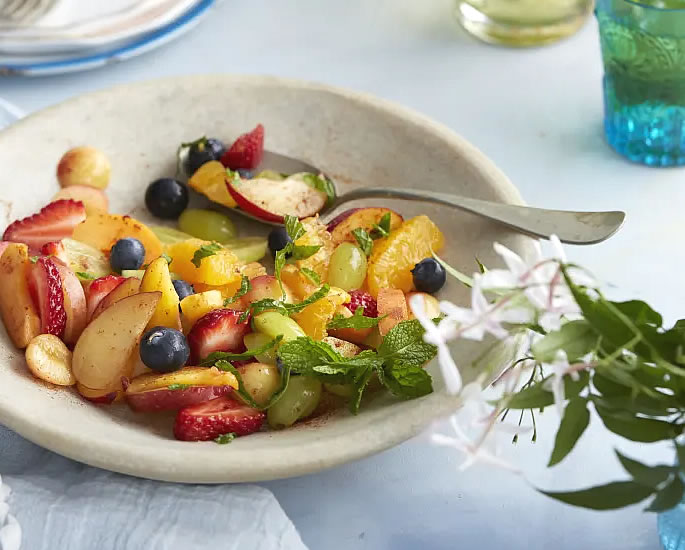 This is an ideal vegan Indian dessert to have as it is fruit-based.

Fruit chaat is the Desi version of fruit salad and it is a versatile dessert because different fruits can be used based on personal preference and season.

The inclusion of chaat masala adds a subtle combination of sweet, sour and spicy flavours to the array of fruits.

This recipe was inspired by The Kitchn. 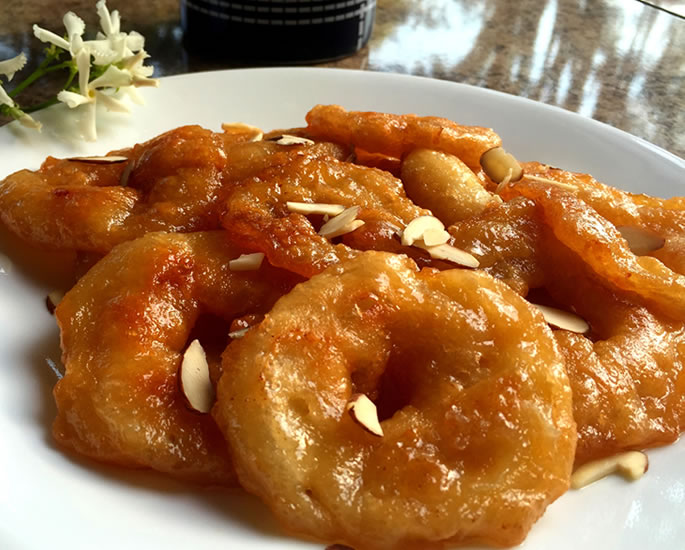 Apple jalebi is a fruity and vegan twist on the popular jalebi.

This is one recipe to try if you are looking for a great vegan Indian dessert.

For the Sugar Syrup 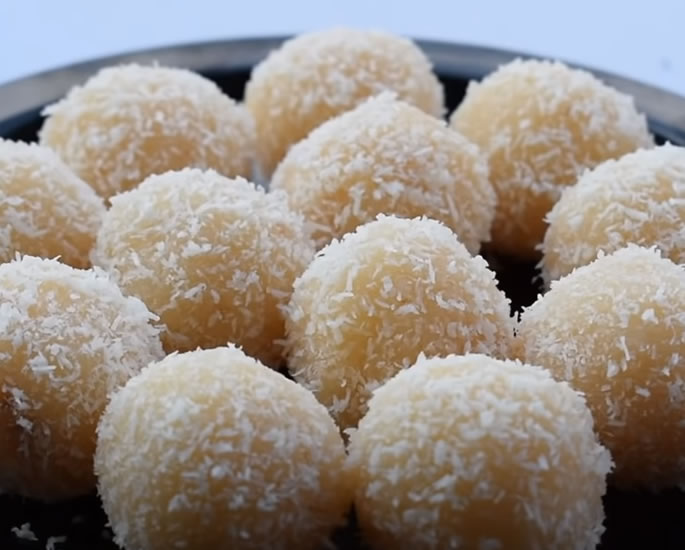 Ladoo is one of the most enjoyable Indian sweets and this is a delicious treat to have for dessert.

This fudgy coconut ladoo is made with just five ingredients and is perfect after a meal on any day of the week.

Not only is it suitable for vegans but this recipe is also gluten-free. 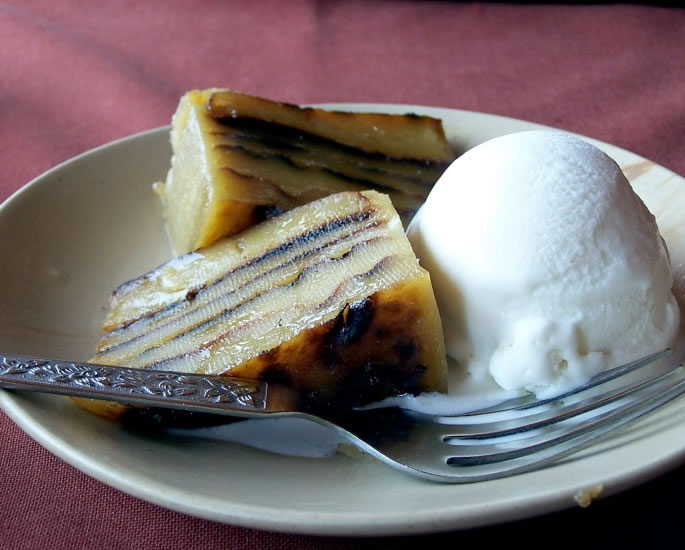 Bebinca is a pudding with a cake-like appearance and it is especially enjoyed in Goa where it originated.

It is made of plain flour, coconut milk, sugar, ghee and egg yolk. What makes this dessert so unique is its layered arrangement.

Usually, it has seven layers but it can have up to 16 layers in total and it is soft and sweet.

To make it vegan-friendly, substitute egg yolk for chickpea flour and use vegan ghee instead.

This recipe was adapted from The Spruce Eats.

Making these Indian desserts will give you the delightful experience of making them for you and your friends and family to enjoy, all while being vegan-friendly.

Indian dessert lovers will certainly savour the chance of trying as many of these as possible!

Dhiren is a journalism graduate with a passion for gaming, watching films and sports. He also enjoys cooking from time to time. His motto is to “Live life one day at a time.”
Restaurant Sat Bains ranked Best in UK
10 Top Indian Restaurants in Bradford to Visit