When it comes to milk, there are numerous plant-based milk alternatives to dairy to appeal to different tastes and diets. Here are 12 to look at.

soya milk is perfect for those with high cholesterol

For many, dairy milk forms a huge part of our diet, however, there are those with dietary requirements and cannot have it. Thankfully, there are many plant-based milk alternatives available.

They are usually made from plant-based extracts and mixed with water. The result is a drink that looks like normal dairy milk and has a similar texture.

As a result, some individuals may switch from dairy milk to a plant-based substitute.

In many cases, people drink plant-based milk due to certain dietary requirements. This may be because they are lactose-intolerant or that they are vegan.

Whatever the reason is, there is a variety of plant-based milk alternatives to choose from which can be used for coffee, cereal, smoothies and much more.

Here are 12 plant-based milk alternatives to look at as well as there pros and cons. 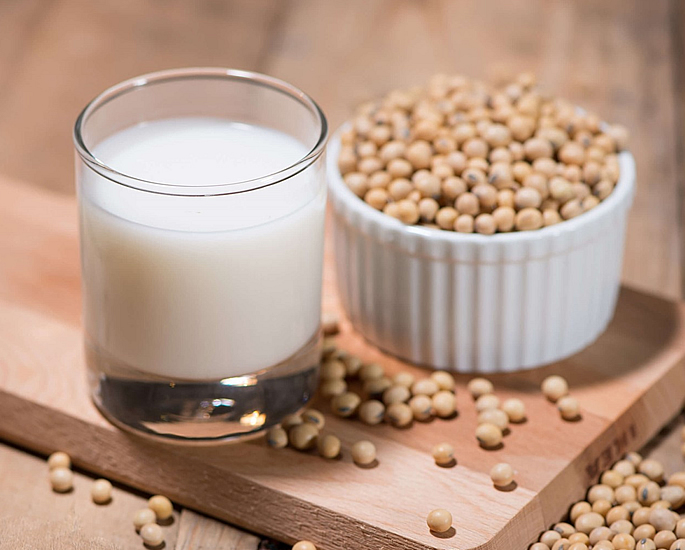 Soya milk is one of the most commonly consumed alternatives to dairy milk. This is mainly due to the similarities in protein level.

In terms of health benefits, soya milk is perfect for those with high cholesterol as it can actually reduce the levels.

There have been claims that soya milk can be bad for our health but many of them are untrue as soya forms part of a balanced diet.

However, some drawbacks are that it is not suitable for those with a soy allergy and that the taste may not best.

One of the main cons is that soybeans are grown in massive quantities around the world to feed livestock and dairy production.

As a result, large areas of rainforest in the Amazon have been burned to make way for soy farms. 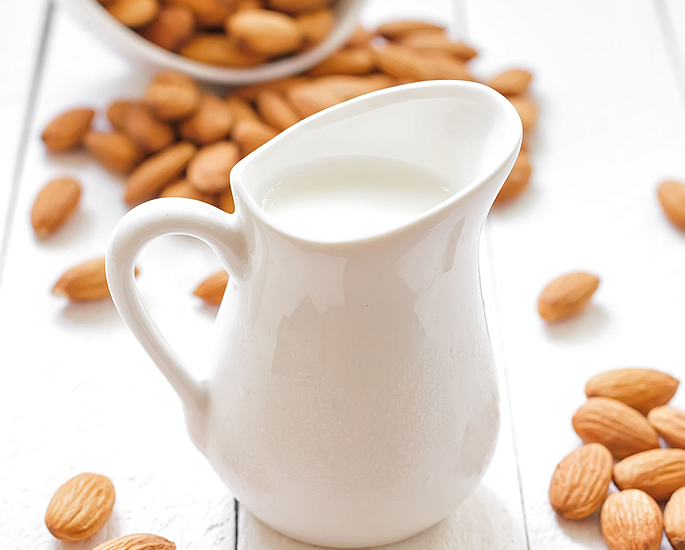 Almond milk is a plant-based alternative which has a creamy texture and nutty flavour, which appeals to consumers.

Some of the pros include the fact that it does not contain cholesterol, saturated fat or lactose. This makes almond milk ideal for those with dietary requirements.

Lactose-intolerant people tend to drink this type of milk as well as vegans who avoid dairy products.

It is usually fortified with micronutrients like vitamin D.

However, one negative aspect is that almond milk offers far less energy (kcal) than other plant-based milks. 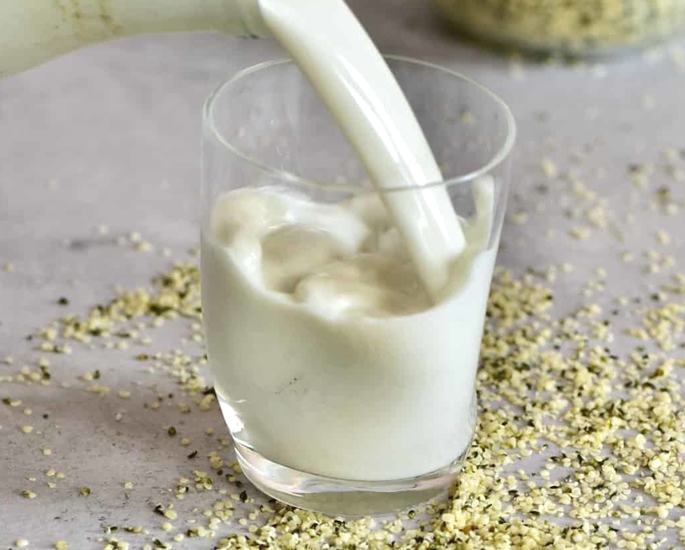 Hemp milk is a popular plant-based alternative to dairy milk and it is made by blending water with the seeds of the hemp plant, Cannabis sativa.

The plant is used to produce marijuana but hemp milk contains trace amounts of tetrahydrocannabinol (THC), therefore, it will not cause mind-altering effects.

Hemp milk has an earthy, nutty flavour and is loaded with proteins and healthy fats. Compared to other types of plant-based milk, hemp milk has much more protein.

Commercial hemp milk is usually fortified with calcium, phosphorus and vitamins A, B12 and D.

Drinking this type of milk has health benefits as it may improve skin health and protect against heart disease.

However, it has fewer calories, less protein and carbohydrates than whole cow’s milk but approximately the same amount of fat.

Some commercial hemp milk may also contain added sugar, salt and other additives. 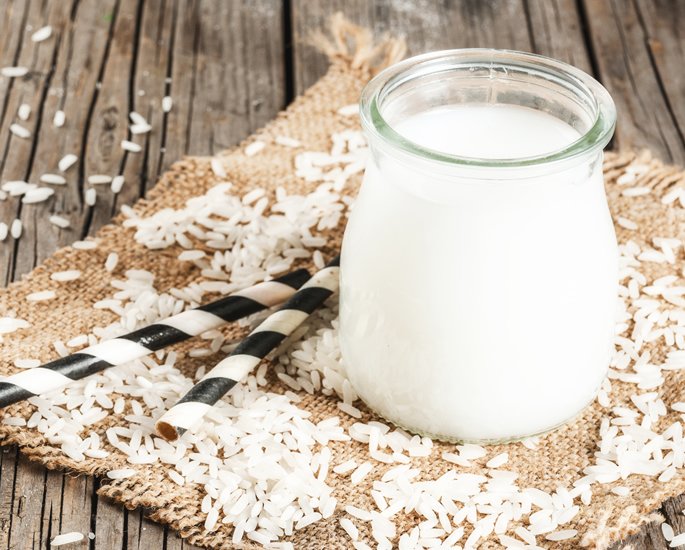 Rice milk is typically made by pressing rice through a grinding mill, which is then followed by filtration and blending in water.

In some cases, it is sweetened using sugar or sugar substitutes. It is also flavoured with ingredients like vanilla.

Rice milk is commonly fortified with micronutrients like vitamin B12, calcium, iron and vitamin D.

One benefit is that it is the least allergenic compared to other plant-based milks. This means it is suitable for those who are lactose intolerant, or allergic to soy or dairy.

Despite being fortified with micronutrients, the levels remain low. Rice milk also offers almost no protein compared with other choices.

The lack of nutrients means that rice milk can be fatal for infants who are exclusively fed on rice milk. 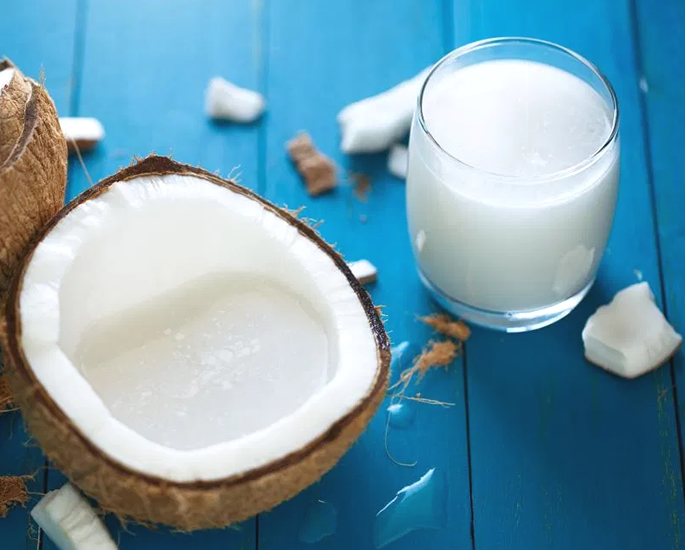 Coconut milk is made by grating the flesh and soaking it in hot water. The coconut cream rises to the top and can be skimmed off.

The remaining liquid is squeezed through a cheesecloth to extract the coconut milk. By repeating the process, the milk gets thinner.

Coconut milk contains quite a lot of fat, however, it is in the form of a medium-chain saturated fatty acid called lauric acid.

In the body, it converts into a beneficial compound called monolaurin which fights disease-causing organisms. Therefore, it may be a beneficial plant-based milk as it may protect the body from infections and viruses.

However, as it contains fat, it is advisable to drink it in moderation.

Coconut milk is lactose-free so it can be used as a milk substitute by those with lactose intolerance. It is a popular choice with vegans and makes a great base for smoothies, milkshakes or as a dairy alternative in baking. 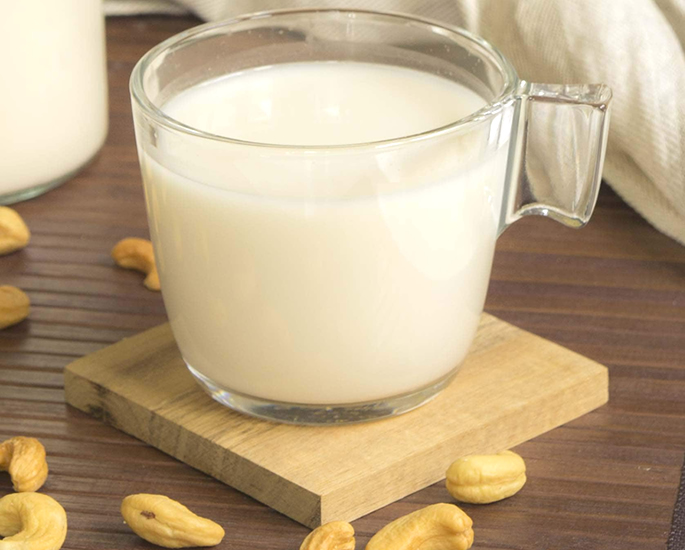 Cashew milk is like all plant-based alternatives to dairy milk, they have positives and negatives.

They are a great option for vegans and lactose-intolerant people.

However, this means that almost all the fibre, protein, vitamins and minerals are lost when the cashew pulp is strained from the milk.

Some commercial varieties add flavours, but that means added sugars, salt and thickeners.

Cashew milk is also unsuitable for those with a nut allergy. 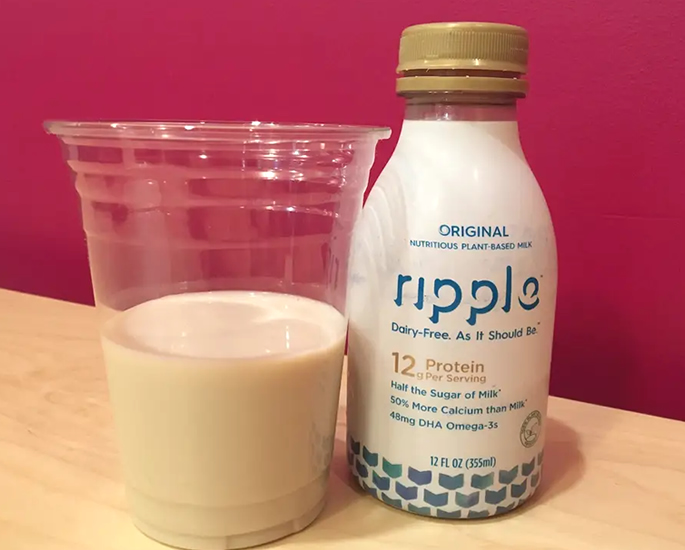 While most plant-based alternatives do not compare to dairy milk in terms of protein, pea milk does.

Like other plant-based milk, pea milk is suitable for lactose and gluten-intolerant people. It is also high in fibre and low in saturated fat.

Like other fortified plant milks, pea milk is fortified with calcium, needed for strong bones and muscles. It has 50% more calcium than cow’s milk and about the same amount as almond and cashew milk.

One thing to be wary about is the sweetened versions as sugar is added, meaning that it has a higher amount of sugar. While it may taste better, it is one which should be drunk in moderation. 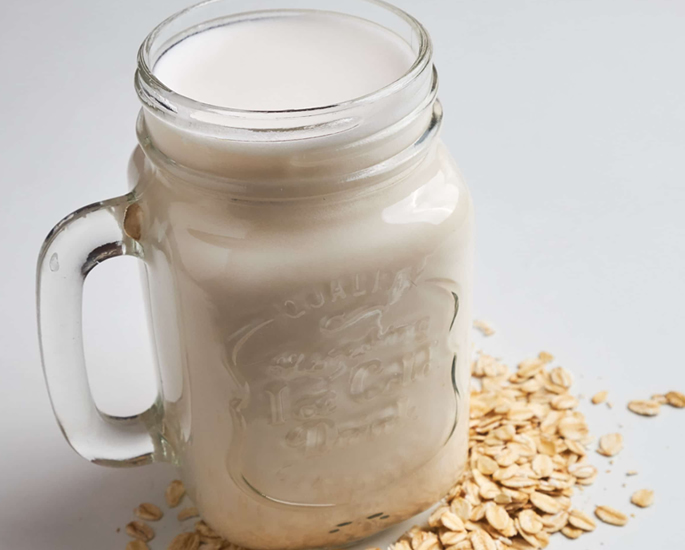 Oat milk is made by blending water and oats and then straining out the liquid.

As a plant-based milk, it is one of the most nutritious as it is filled with fibre, protein, vitamins and minerals which include iron, calcium and magnesium.

A fibre called beta-glucan is present which has been shown to improve cholesterol levels, therefore, linking the milk with reducing the risk of heart disease.

However, it is too early to say if the beta-glucan in oat milk has the same effect as eating oats.

It is also important to check the label as marketing claims can make ‘vegan’, ‘lactose-free’ and ‘non-dairy’ sound more nutritious than they actually are.

Oat milks which are labelled as ‘plain’ or ‘original’ can contain added sugar. 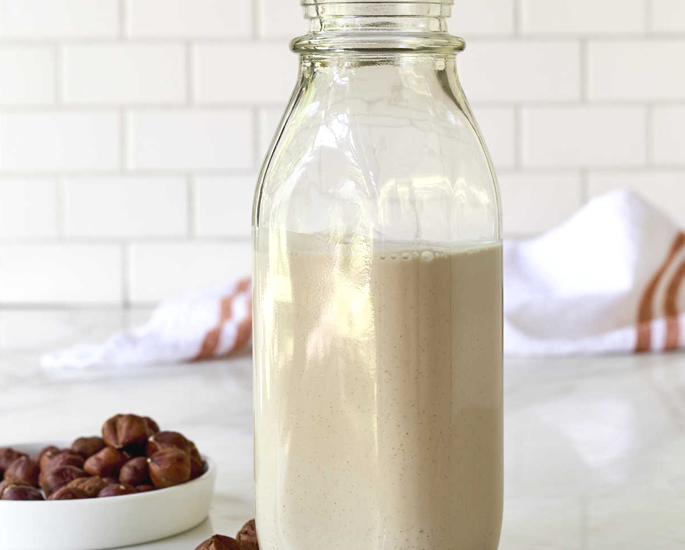 Hazelnut milk is an amazing plant-based milk alternative to dairy.

Although it is not as popular as almond milk, it has several health-boosting properties.

It is low in calories, containing no cholesterol or saturated fat. Hazelnut milk is also a good source of vitamins B1, B2 and B6 which are all essential in blood formation and mental health.

The alternative has an excellent source of vitamin E which promotes healthy hair and skin, as well as boosting the health of the heart muscles.

With a rich source of protein, hazelnut milk is also suitable for those with dietary requirements like intolerance to gluten and lactose.

While this milk may be versatile, it is not suitable for those with a nut allergy. 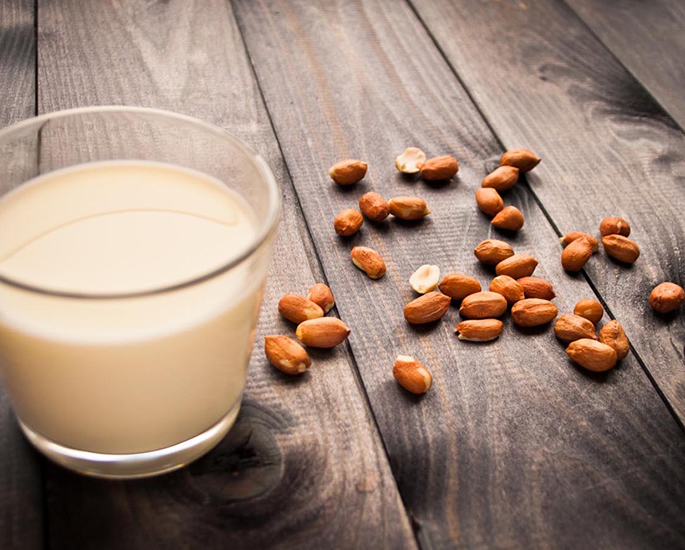 Peanut milk is produced in a similar way to almond milk, by using peanuts and water. Added ingredients include salt, sweeteners and grains.

Peanuts are high in calories but are low GI. This means that they are full of low release energy. This is a positive aspect of peanut milk.

This plant-based alternative is also rich in monounsaturated fats which are crucial for maintaining good heart health.

Peanuts contain a lot of antioxidants. According to the University of Florida, they contain more antioxidants than carrots and beetroots.

This type of milk does not contain any lactose but it should be avoided by those with a nut allergy. 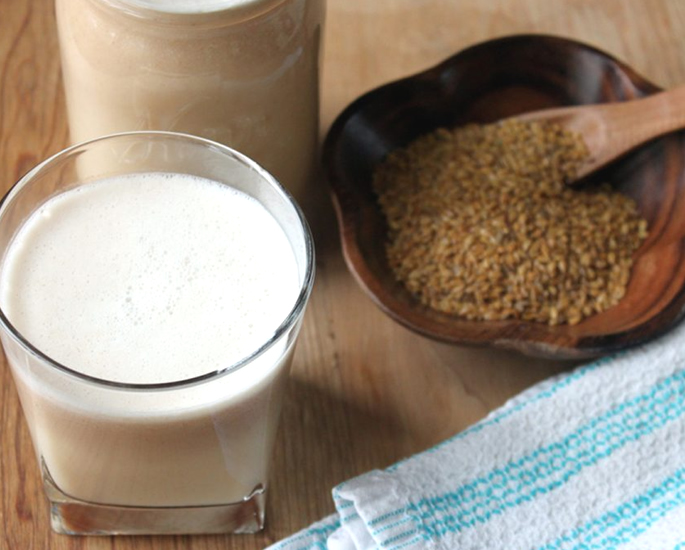 Flax milk is made using flaxseeds with a creamy texture and slightly sweet taste.

It has a slightly thicker texture so it is a great plant-based alternative to whole milk or cream.

In terms of nutrition, flax milk contains Omega 3. It also provides three grams of fibre per serving compared to zero that is in dairy milk.

Although flax milk contains quite a lot of fat, it is unsaturated.

However, one drawback is that flax milk contains less protein than dairy milk.

The amount of Omega 3 and other nutrients also varies as some brands use flaxseed byproducts like flax oil, which means that not all of the nutritional potential is capitalised on. 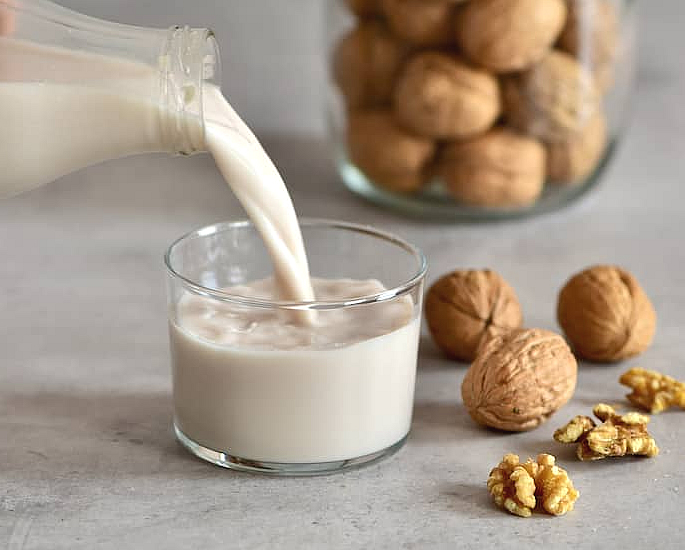 Walnuts are one of the healthiest nuts available so it is no surprise that walnut milk is a nutritious and delicious plant-based milk alternative to dairy.

Walnuts are high in vitamin E. It is believed to help prevent oxidative stress and damage in the brain.

Another benefit is that walnuts contain a lot of Omega-3, which is known to support brain health and improve cognitive function.

Not only does Omega-3 support a healthy brain but it also helps maintain healthy cholesterol levels. The Omega-3 fatty acid alpha-linolenic acid (ALA) can help lower blood pressure.

Although walnut milk contains helpful nutrients, it is best to avoid it if you have a nut allergy.

When it comes to non-dairy milk, there is a load of options. From well-known ones like soya and almond to more obscure options like flax and hemp.

These plant-based options vary in terms of nutrition when compared to each other, however, the nutrition is far less than dairy milk.

Nevertheless, these milk options are a suitable alternative if you have dietary requirements.

Dhiren is a journalism graduate with a passion for gaming, watching films and sports. He also enjoys cooking from time to time. His motto is to “Live life one day at a time.”
MyLahore reveals Coronavirus impact on Restaurant Business
Nutritious Food that Every New Vegan Needs