British Asians and the Use of Sex Clinics

With sex still being taboo for many British Asians from the South Asian communities, we take a look at their use of sex clinics.

Sex. Yes, that term that Desi people are aware of. Therefore, what about sex clinics? Are British Asians even more scared of those as well? This is what we want to find out.

When a person finds their sexual health is not normal where they have an infection or feel unwell, alarm bells can go off.

For a Desi person from the British South Asian community, it can be even a bigger issue.

Catching an STI is not the behaviour typically expected amongst British Asians. Especially if they are dating in secret or having an affair.

While contraception such as condoms are an obvious choice to avoid catching something, catching an STI does mean seeking medical help.

So, when we need help with sexual health-related matters, are some of us still afraid to speak out and seek the help we need?

What is it about sexual matters that South Asians are still finding taboo?

How comfortable does a British Asian person feel about going to a sex clinic?

These questions are among those we explore to get an understanding of the relationship between British Asians and the use of sex clinics. 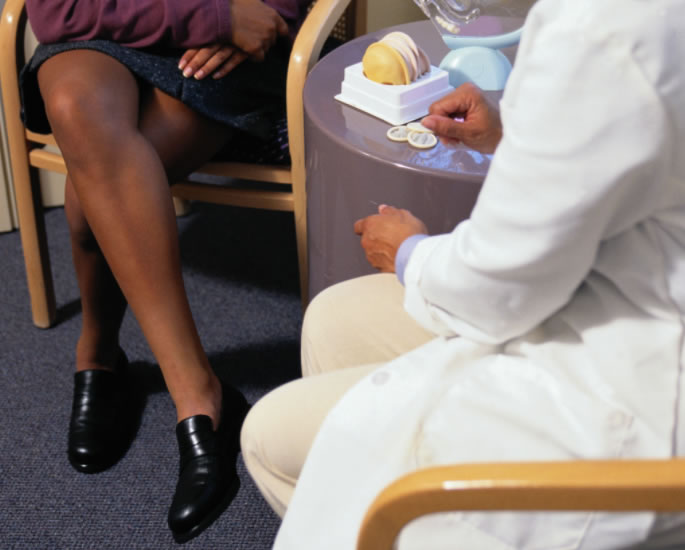 South Asians make up nearly half of all ethnic minority people in the UK.

Research conducted by some of the UK’s most reputable health organisations shows that South Asians are not nearly engaging enough with sexual health services to help curtail the rise in sexually transmitted diseases.

Studies from some of the UK’s densest South Asian populated areas: Birmingham, Bradford, Kent, Leicester and London all conclude that Asians are less likely to go in-person to a Sexual Health or GUM (genito-urinary) clinic when compared against other ethnic communities.

The BASHH (British Association for sexual health and HIV) report (2018), found that 1 in 5 or 20% of all STIs diagnosed are in ethnic minorities.

This transpires into a growing existential problem for the British South Asian community.

The country’s capital, London remains perennially the worst area in the UK for new cases of infections.

The South West has also been highlighted as fast becoming a breeding ground for these diseases. 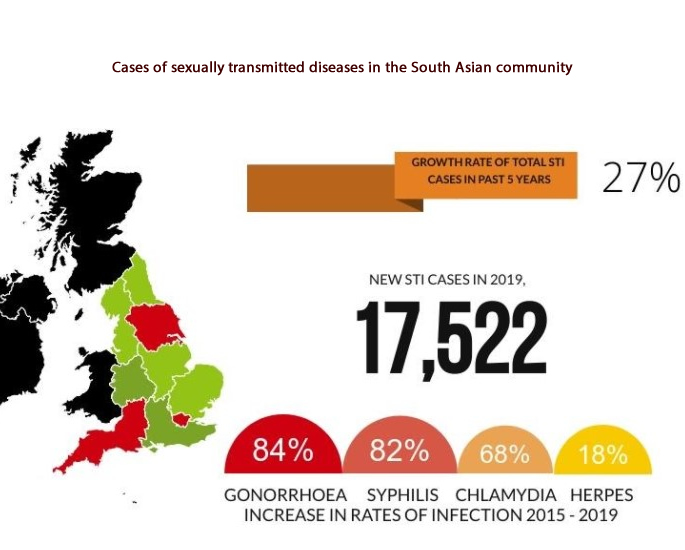 Gonorrhoea cases have spiked in Yorkshire and Humber having increased 84% in the past 5 years.

These problems are being exacerbated by the South Asian community’s own reluctance to seek help and reach out to sex clinic health services.

A lot of this concern stems around firm held beliefs that services such as sex clinics are for ‘others’ and not for them.

Many Desi people still fear being labelled and shamed by the community by engaging in such visits.

In some sense being seen in these places is like being “seen guilty by association”.

Though there is evidence to suggest that some people choose alternatives to sexual health clinics i.e. visits to pharmacies, GPs or home STI do-it-yourself testing kits.

It does not fully account for why British Asians are not using sex clinics at the same rates as their counterparts do.

The issues surrounding taboo and ‘sharam’ are still very much big problems within the South Asian community.

They play a large part in dissuading a lot of young Asians from engaging with sexual health services.

This attitude must evolve if these latest rising STI infection rates are to be controlled.

With many of these clinics operating reduced services due to Covid-19, there is a fear that next year the infection trend could see a spike in the South Asian community.

This is cause for concern that the UK government has so far been slow to redress.

The British government has cut spending on sexual health services by a quarter, which in real terms is £700million during the past five years.

They have little national information available on how the South Asian community has been using these services throughout this time.

DESIblitz tried contacting the various agencies but were met by the usual refrain; that for GDPR and health-related matters they are not able to provide details of visits made by the community.

When the agencies were probed about possible reasons why the South Asian community seems to be averse to using these clinics, the answers varied.

They included reasons like cultural restrictions, lack of sexual education, prearranged marriages and dominance of the husband in contraceptive decisions.

Despite knowing these challenges the government takes a limited action approach to tackle these issues within the South Asian community.

Undeterred by the lack of Government data on the South Asian community, DESIblitz decided to contact the Umbrella Group.

“Umbrella” run by University Hospitals Birmingham NHS Foundation Trust (UHB) was formed in 2015. They work in association with a number of partners.

According to their annual report, Birmingham is classified as a high prevalence HIV area (2.74 cases per 100,000 of the population).

In 2019, Umbrella had nearly 220,000 contacts with patients across the service. Of those, only 8% of users identified as being Asian.

These numbers look even bleaker when adjusted for Birmingham’s ethnic mix figures. It translates into being only 1% representation per 100,000 of the city’s population. 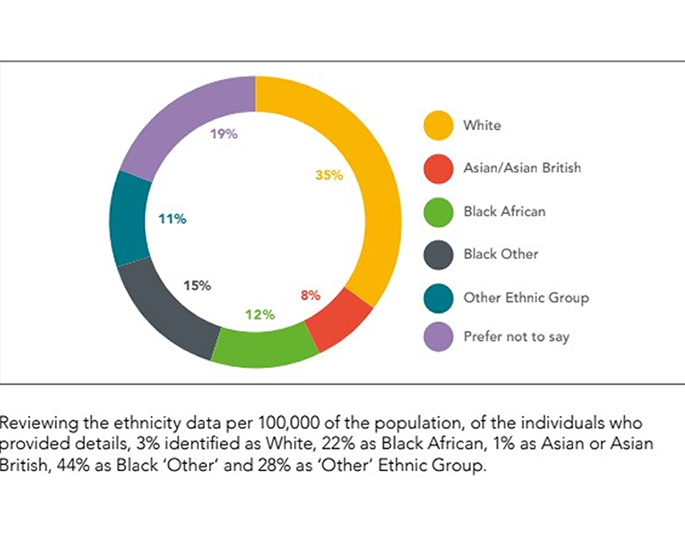 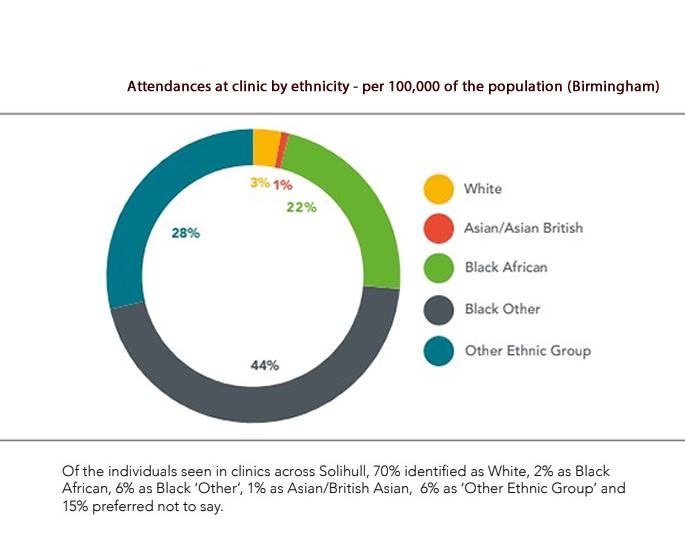 There is this emphasis that the South Asian community is shying away from using sex health clinics.

Peter Cole, head of communications for Umbrella, offered his opinion on why the numbers were so low:

“South Asian communities typically come from a culture of where the male has to be seen as dominant and masculine.

“This perception goes very much against the grain of how some men in the community view themselves and can conflict with their identity.

“For women, the issues are even more complex, they have to guard their honour for the sake of not just themselves but their families too.”

A report by the Umbrella Group did also uncover another shocking finding.

The Umbrella Group reported that Asians are more likely to engage in psychosexual medicine such as crystal meth, M CAT and G prior to being referred to sexual health clinics.

They report that 25% of their chem-sex issues related to patients were from the South Asian community.

The ‘Pride and Prejudice’ Factor 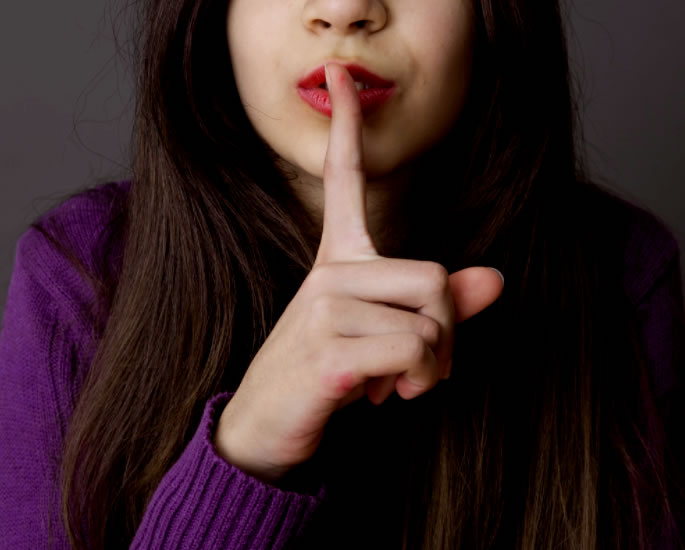 Author Nazreen Mansoor writer of Exploring honour shame for South Asian British Muslim men and women (2017) suggests that it is deep-seated cultural barriers and beliefs that are holding people back from discussing sexual health and relationship matters.

Though her work centres on ‘honour killings,’ some of the themes touched upon in her works help provide strong ideas behind why South Asians as a group see going to a sex clinic as being taboo.

“When one member of the family is at risk of being shamed all others are also at risk, since each is defined not by her/his ‘shame’ alone, but the family’s “honour”

“Sharam requires a woman to be watchful of all her actions – how she walks, how she responds to others – because patriarchy demands that sharam is always present under the surface.

“Asian women have a greater anxiety about their social standing, especially in relation to their communities and families… the fear of bringing shame to one’s family is strongly linked to confidentiality issues.”

These are all likely issues which interplay for a South Asian woman, while she considers engaging with any form of sexual health service.

As for men and the dominance and control characteristics noted before.

A reference in Nazreen’s study cites:

“I suggest some South Asian British who migrated to the UK may be fearful of the honour and shame they revered, could become diluted by future generations attitudes and behaviours.”

“Perhaps this is why they continued to exert familial and social control despite the socio-cultural environment of the host country having very different understandings, approaches and mores regarding honour, shame and gender equality.”

To find out more about how British Asians perceive sexual health and well being, DESIblitz decided to probe the public to find out more.

Here are some of the findings:

Needed Help or Not?

Some people support the idea that South Asians don’t have the same needs as other groups, as rates of infections observed are much lower.

There’s some truth to this too.

However, the stigma attached to the use of sex clinics and the overall taboo related to sexual matters still covers British Asian Desi society with a fabric of denial and shame.

It is this stigma that is preventing people suffering from any kind of sexual issues, especially, those who are sexually active outside of marriage, obtaining access to viable and targeted help.

There seems to be a ‘them and us’ notion where many people from Desi society label such facilities not suited to their needs due to what they stand for.

Sadly, this way of thinking leads to ignoring the free support available to anyone who has a sexual problem, Desi or not.

There is a need for more education around sexual health in the South Asian community.

Sexual diseases are spreading, resulting in loved ones, partners and even acquaintances getting affected. Therefore, it is imperative that attitudes change.

Greater understanding on how to get free help and support for sexual health matters is very much needed for British Asians.

Ignoring the problem or being in denial is not a responsible attitude, especially, when it comes to people who do not have English as their first language.

Therefore, changes in mentality and taboo around sex clinics is something that does need to be worked on by future generations because accepting pre-marital sex is practised among young Desi people in the UK, is a given in today’s society.

Using a sex clinic or organisation providing sexual support services should not be viewed with the negative attitude by the community.

Instead, it needs to be seen as help which is needed for a situation which is no different to any other health matter.

The quicker the mindsets change the more people can get help for their sexual issues and ailments.

What about your views on using a sex clinic for a sexual health issue? Let us know in our poll below.

Jessie, a free-thinking discovery writer who aims to shed light on topics that emerge in many news and lifestyle areas. He writes by pushing boundaries and drawing upon real global experiences. His approach is characterised by the quote "work for a cause, not for applause."
Ganesh Acharya reveals 98kg Weight Loss Transformation
5 Best Indian Essential Oils and their Benefits