Should Sex Education be Taught Earlier?

Sex education is now compulsory for children in the UK. DESIblitz asks if sex education should be taught to younger children, and how South Asia has progressed in dealing with the subject.

"They shouldn't be learning about things that will make them lose their innocence."

With teen pregnancies on the rise, the introduction of compulsory sex education in schools appears logical. However, somewhat unsurprisingly, a minority are unhappy with this decision to make sex education a part of the British curriculum.

Although parents do have the right to withdraw their children from sex education classes, mainly for cultural or traditional reasons, statistics show that only 0.04 per cent of pupils are actually removed from these lessons.

Yet the possibility of the introduction of relationship lessons from the age of 5 has sparked outrage across Britain. These lessons would involve the discussion of different types of relationships, management of emotions and physical changes to the children’s bodies. 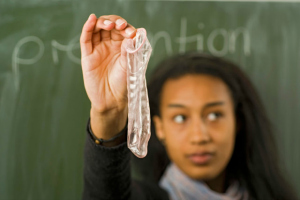 Najma, a concerned mother, says: “There’s no need, they’re still children, they shouldn’t be learning about things that will make them lose their innocence.”

Possible changes to the curriculum in a school in Sheffield would involve ‘explicit’ videos, with young children being taught about ‘touching’ and homosexual relationships. Louise, a mother of four, feels the videos would only encourage them to ‘think in a sexual way’.

Distressed parents aside, some head teachers are also against this decision on the basis that: “It will add another compulsory element to an already overcrowded curriculum.”

Although the debate over what should be taught in sex education classes is still a controversial one, what can be agreed upon is the recognition that sex education in schools is in fact a necessity, in the UK at least.

With India having the highest number of AIDS patients in the world, it ought to be made clear that sex education is vital for the well-being of future generations. 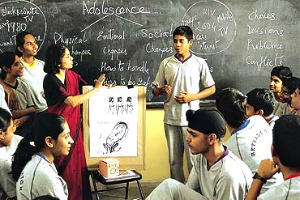 However, in April 2007, the Maharashtra state banned sex education in schools after claims from angry legislators that the introduction of such classes would ‘corrupt young minds’.

Harsh Vardhan, the Union Health Minister, had a somewhat different approach on the matter. After previously stating that sex education should be banned, he later altered his statement saying: “Sex education is necessary, but without vulgarisation.”

As expected, this only fuelled widespread criticism, with opposition congress Randeep Surjewala responding: “I don’t know what Vardhan means by vulgar sex education. Which school teaches that?”

What may have been viewed by some as a mockery of Vardhan’s somewhat ambiguous statement, East India Comedy released a short video titled ‘Sex Education In India’.

This video highlighted India’s attitude towards sex through a ‘government approved’ sex education lecture, proving highly successful, earning itself just under 300,000 views on YouTube in just one day. 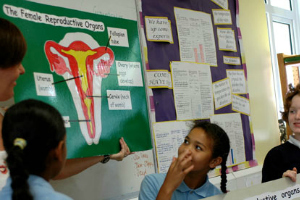 The comedic yet powerful sketch ended with the words, Sex is not a stigma, ignorance is, etched onto a chalk board.

President of the Pakistan private schools federation, Mirza Kashif Ali has more to say: “What’s the point of knowing about a thing you’re not supposed to do? It should not be allowed at school level.”

Shadabad Girls Elementary School in Pakistan is one of only eight schools in the country which shoulders the immense responsibility of educating their students about sex. 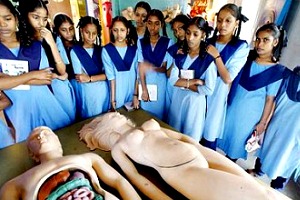 Around 700 girls have been enrolled in these classes, in which girls learn about puberty and their rights in sex.

With no parents having objected to the lessons, one can only see this as progress.

Developments have also been made in the media, with the establishment of websites such as Humraaz which aim to educate the general public about sex and sex related illnesses, in both English and Urdu.

Nevertheless, excessive amounts of pressure being placed upon the government and schools regarding sex education would appear to some as an indicator of a lack of parental responsibility.

Sol Gordon, an author of books on parent child communication and sexuality, stresses the significance of bonds between parents and children:

“Parents must talk about sex. Those who are uncomfortable hearing or speaking sexual words can practice them – alone…with a partner…until they feel natural and comfortable.”

20 year old Anita says: “Many South Asian parents don’t consider it necessary for their children to know about sex. Traditionally they’re only meant to have sex after marriage so for them it’s just irrelevant.”

Despite the many traditional opinions on sex in South Asian communities, the steps being taken in South Asia regarding sex education can only be applauded.

In both South Asian and Britain, it is clear that sex education should form an important part of any curriculum, and be taught in a way which benefits both boys and girls.

Lead Journalist and Senior Writer, Arub, is a Law with Spanish graduate, She keeps herself informed about the world around her and has no fear in expressing concern in regards to controversial issues. Her motto in life is "live and let live."
Asgar Saboo ~ The Celebrity Hair Stylist
Monsoon Make-Up Trends