Should Sex Education be Based on Culture?

Sex in South Asian culture is not an easy subject to discuss openly. How can culture impact sex education? DESIblitz explores.

Sex education, when or how it should be taught has attracted much debate over the years. Governments, teachers and community groups all have contributed to the debate.

With teenage pregnancy on the rise and sex being practiced much more than it ever was, the question of how culture affects sex education is a real one.

For Desi people, sex is still taboo and not discussed openly. Although, there are some improvements in acknowledging that young people are engaging in sex before marriage.

In the UK, where generations of British Asians have been brought up on the snapshot of India, Pakistan or Bangladesh of the time when grand-parents or parents left their homeland, sex education is not an easy subject to discuss at home.

In addition, there are many Asian parents who are not comfortable with sex education being taught to their children either at a young age or at all in schools, due to cultural and religious reasons.

In the majority of cases, it is ‘assumed’ that children will find out about sex in some kind of natural progression in their life and it is a subject not requiring any kind of special recognition.

Also, embarrassment, awkwardness and respect are still key reasons why it is not easy to discuss sex within the Asian community.

“There is no way I could discuss anything to do with sex with my parents or family! It is way too embarrassing. I can chat to my mates but even then its limited.”

“I was not allowed to attend sex education at school. So, I kind of got broken information from my friends who did go to the classes. This did not help me when it came to relationships.”

Sex cannot be ignored as something that ‘does not happen’ in ‘our culture’ – it does and now more common than ever. The chances are it did in the past but it was hidden and secretive.

“I think sex education is important and it can stop you from making mistakes which could wreck your life. I know our culture does not like to promote sex but if done right, it can be very useful.”

Sex education aims to promote good and safe sexual health. It informs about the social, physiological, and biological aspects of leading a healthy sexual life.

Many from within the Asian culture would argue that by learning aboutsex when you are young will encourage you to do it and it’s not a good thing.

“I never learned about sex at school and definitely not from parents. It’s not affected me at all. My sex life has been a natural part of my life.”

“My parents were not happy about me having sex lessons at school. So, I had to learn about it myself, from friends, magazines and the Internet. It can be confusing of what is right or wrong.”

In June 2014, the Health Minister of India, Harsh Vardhan, stated on his website that sex-education in schools should be banned.

This did cause an outcry from public health activists who were angry with the “vision” of the doctor-turned politician. Bringing sex education into the cultural debate.

“In India, kissing in public is frowned upon while pissing in public is not. There are certain political parties who would kill people for protecting the so-called integrity by beating the hell out of couples hanging out in public places. How could you expect people to talk about sex freely then?”

This very comedic view of sex education in India does try to reflect how culture can impact such education: 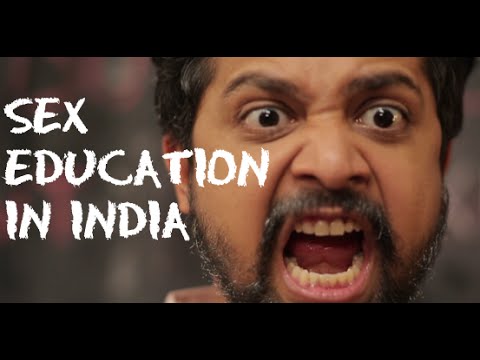 So, is it okay for culture to dictate how or when young people should learn about sex?

There is no factual evidence that restriction of sex education by culture leads to unhappy relationships or lack of sexual development. Many would say it helps development because it restrains sexual intrigue until the right age.

But in an ever changing world, where the Internet is being used as a major source of information and smartphones giving instant access, it is likely that young generations will be using it as a means of sex education, albeit secretly.

This practice is definitely prevalent amongst South Asian societies too, especially in India.

In addition, India has one of the highest rates of teenage pregnancy and HIV/AIDS infection and a shockingly high rate of sexual abuse amongst children and adults – both men and women.

The cause of this, it is argued, is the lack of education to youth about their bodies, their desires, and the importance of safe sex.

In India, culturally, moral values are not contraceptives, culture does not prevent rape, traditions do not educate the youth about sexual diseases, and unwanted early pregnancies.

Therefore, whereas in the past when social controls were easier to put in place and manage by older generations, this is now a challenge, and many say it needs to change.

“Being a parent of two young children. I will certainly not stop them having sex education at school. Because the world is very different to what it was when I was growing up. We cannot ignore children having access to the internet and cannot police them all the time.”

“My sex education was very poor at school. So, I will make sure my children have correct support from me. I do not want them learning about sex the wrong way.”

Sex education is not only about having safe sex, it also teaches children about the dangers of the dark side of sex including rape, pedophiles and sexual abuse.

“Today, children and teens NEED to know about sex. Not just as a means of procreating, but also to protect themselves against evil.”

However, for those who abide by their cultural ways, it is unlikely they will change their outlook on the issue of sex education.

“Our culture has a strong heritage and I have had no issues with whatever my parents allowed me to do or not. Sex education was not allowed and I respected their decision. I will be doing the same with my children.”

“There is no way I want my children to learn about sex early in life. It is not right in our culture to do so. I learned about it when the time was right and so will they.”

They key issue is that poor information can lead to poor decisions.

Sexual decisions for young people are tougher than ever before. Without parental knowledge, young Asians are having sex. Some being pressured to do so by partners and others by peers.

Not having the right knowledge about safe sex can lead to unwanted pregnancies, abortions and transmission of sexual diseases.

For British Asians, living in a Western society, it is important that vital information about sex is not forbidden due to cultural taboos, whilst still respecting parental decisions and values.

Sex education today is an important aspect of any society and if it’s restricted by cultural values, it must be managed accordingly to ensure young people have the right information for their future relationships, for positive and fulfilling sexual experiences.

Priya adores anything to do with cultural change and social psychology. She loves to read and listen to chilled music to relax. A romantic at heart she lives by the motto 'If you want to be loved, be lovable.'
Why Counselling can really help British Asians
How a Bad Rishta can Affect your Life