Children in England have spoken about wanting Sex Education classes to help them understand dangers online. However, not all Asian parents may agree.

"Nearly half of the girls polled said they were worried about strangers contacting them online.”

11-15-year-olds in England wish to receive sex and relationship education (SRE) to protect them from sexual exploitation, says Barnardo’s.

According to a poll by the children’s charity, 7 in 10 children think the government should introduce the sex and relationship lessons.

In a bid to stay safe, 9 in 10 youngsters said they wanted to understand the dangers of the internet. 94% were concerned about the risks of sending images online to strangers.

The research was taken between 30th December 2016 and 3rd January 2017. The figures were drawn from YouGov Plc.

Barnardo’s Chief Executive, Javed Khan, said: “The overwhelming majority of children who answered our poll believe they would be safer if they had age appropriate sex and relationship lessons in school.”

The charity is calling for the government to introduce compulsory age-appropriate sex and relationships education in schools. It would be supported through the Children and Social Work bill.

Chair of the Women and Equalities Committee, Maria Miller, said:

“It’s even more striking that children themselves are calling on the government to make sure they receive high-quality SRE lessons so that they can keep themselves safe. The case for compulsory sex and relationships education has never been stronger.”

Barnardo’s also asked parents what they think. 87% of parents agreed that age appropriate lessons on sex education are vital in helping their children.

90% of the parents said that ‘sexting’ was putting kids at risk of sexual exploitation and grooming. Whilst, 40% did not restrict their children’s internet usage.

However, British Asian parents may not all agree. It is not common practice for Desi parents to educate their children from young ages on sex and relationships. 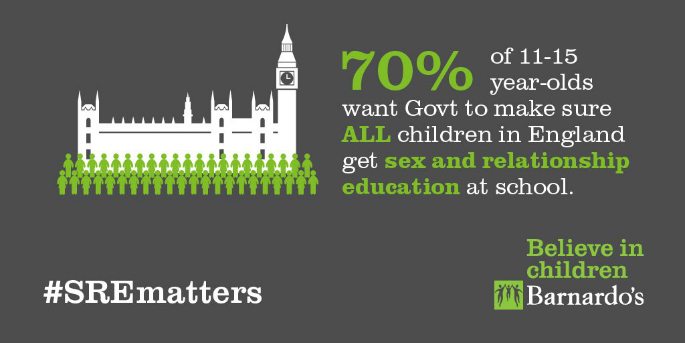 Many Asian parents may not even be aware of what their children already know, if anything. They may also be unaware of their children’s online activity.

Cultural traditions and faith play an important element in this, as many South Asians may believe that things such as sex need only be discussed when their children are to be married.

This, in turn, would make it difficult for Asians to allow their kids to be given high-quality sex education and relationships classes.

But, no kids are fully exempt from sexual exploitation due to their cultural background. British Asian youngsters are also in danger of the online world and grooming.

Khan said: “Online grooming is a very real danger facing all children and nearly half of the girls polled said they were worried about strangers contacting them online.”

Nicola Roberts, the Ambassador for Barnardo’s also commented on the results. She said: “With sexting becoming such a huge problem, it’s essential that children know how to protect themselves online.

In a Q&A, Barnardo’s laid out the foundations for their stance. The charity said: “Many victims who were groomed to be sexually exploited were not always aware that they were being manipulated and coerced for sex.”

Although parents are not forced into allowing their children to attend the classes, Barnardo’s believe that all parents, including Asians, will benefit from the lessons:

“High-quality SRE should be provided through a partnership between home and school which is inclusive of differences of faith and belief.

“Whilst parents will still be able to opt-out their children from SRE, schools should engage with parents and inform them about what their children will be taught to address any concerns in advance.”

Not all British Asian parents may agree with this, but with support from schools and the government, they may understand that their children’s risk of sexual exploitation will lessen, and they will feel safer online.