Are crammed buses becoming a common sight in the UK? As adventurous as the buses of South Asia? With no queues, no seats and lengthy delays?

"The other day, we sat on the stairs. I think we will soon end up on the roof."

Tightly packed buses are a familiar scene for the travellers of South Asia. With UK’s transport becoming more busier, and passengers having to face high levels of delay, could Britain soon begin to look like the South Asian countries?

From having to wait for hours to be stuck on a full bus, without a seat, to facing the discomfort of inhaling the foul smell of strangers? The slant angle, may not be far.

Through the voices of everyday UK bus travellers, we explore the extent to which passengers are continually facing overcrowded conditions.

But, are the two transport systems really beginning to look alike? Let’s first travel through the bus rides of South Asia!

The Overcrowded Buses of South Asia 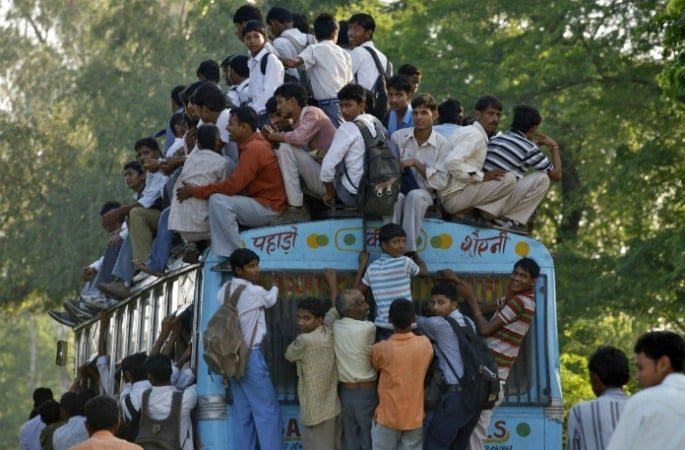 The overflowing of people on buses in India, Pakistan, and Bangladesh, is the visible expression of the Asian transport mess.

Yet, they are beautifully decorated, attracting their passengers.

However fun their appearance and routes may well be, they are not without their downsides. And, of course, the long waiting times.

Illustratively, so firmly packed with people, squeezing out of the windows and swaying out of the doors. The single deck designed buses are given another level, with people sitting on the roofs and on the floors.

No bus is ever too full.

There will always be a way to stuff more people. Until you feel like the smallest piece of an intricate jigsaw puzzle.

For example, the public buses in the city of Chennai in India, are found to be the most overcrowded buses in the entire country. Supposedly, these single deck designs carry 1,300 passengers on each bus, every day.

Apart from being dangerous, they are also uncomfortably sweaty in the summer.

Above all, bouncing along the tracks, through the rough and tough roads, their buses make it through the continuous curves and bends.

Seated, standing, and, on the roof. All in a single view.

But, hold on! There is still room for one more!

Regardless, dealing with these buses, is no less than a form of art. As such, you witness the most creative ways that people cope with crowding on the buses.

So, what about the UK?

Are UK Buses as Overcrowded as the Buses of South Asia? 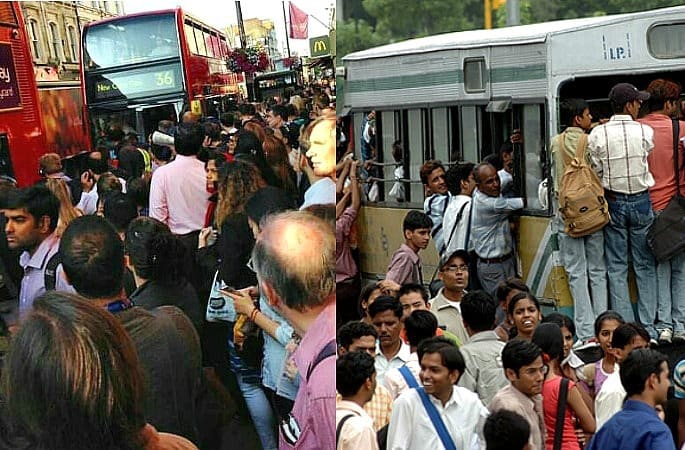 Comparatively, buses in South Asia are much cheaper than the UK.

With rising fares, London is one of the most highly-priced cities in the world when it comes to public transport.

But, are passengers still squeezed onto the packed buses, and can’t breathe?

Conversely, don’t you get more value for money in South Asia? Hanging onto open doorways with two fingers? Well, at least you get fresh air!

Yet, over time, as reported by the Guardian:

“The population is forecast to grow by 100,000 a year. This means more overcrowding on buses, and more people left behind at bus stops.”

Speaking to everyday bus travellers, DESIblitz gathered that passengers are routinely subjected to high levels of overcrowding and delays:

“The other day, we sat on the stairs. I think we will soon end up on the roof,” says Jessica,* a regular bus traveller from Birmingham.

Tahira*, a University student says: “I pay my fare to have a seat on the bus. Not to stand for the entire journey. Then there are people with shopping bags on the seats. This annoys me the most.” 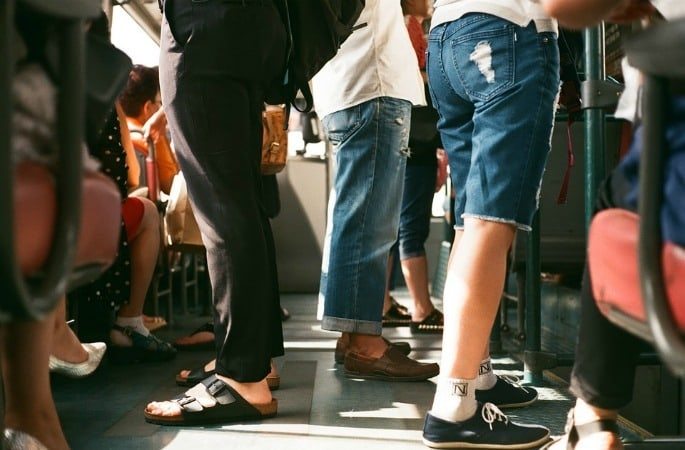 Salina adds: “Sometimes it’s so packed; I have to step out of the bus. So that people standing behind me can get off at their stop.”

On the other hand, many commuters face lengthy delays:

“After work, I rush to get to the bus stop. Only to wait for 30 minutes, or sometimes even an hour.” At times, it’s the same in the morning. By the time I reach work, I feel so tired and drained,” says Bilal.

“In the morning, I reach work in 15 minutes. However, on my way back, it takes me an hour. I’ve also had enough of the pushing while trying to get on the bus,” expresses Maleeha,* from London.

What happened to the Art of Queuing? 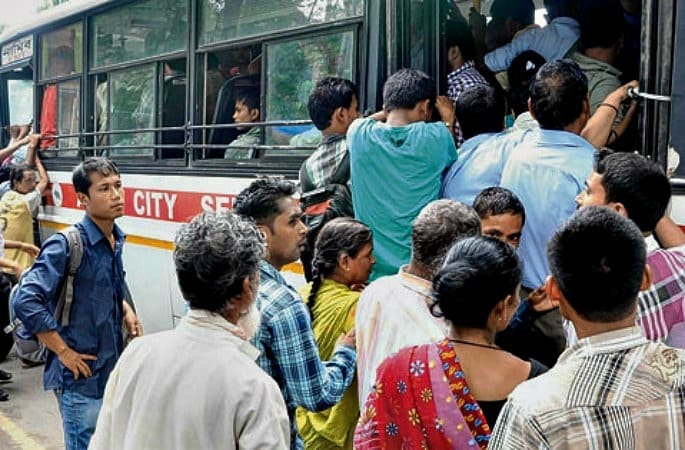 “I stand where I think the queue starts for the bus. But, others stand in random places, busy with their phones. As soon as everyone sees the bus approaching, they come from three different directions, pushing their way through me,” says Reema.

Hamza simply describes to DESIblitz: “First there and last one to get on. But you still hear the elders tut.”

Meanwhile, Saira says to her friends: “Just hold onto your coat when getting on!”

Is it all about who gets on first? Dead or alive?

Have people forgotten how to queue? Or is it just the Asians, who just don’t know that there is a queue? Indeed, a fascinating question for sociological analysis.

In view of that, an exceptional poet, Richard Archer, in his poem, The lost art of queuing for the bus, perfectly describes:

“Gone are the days when folk would stand in line. And politely get on the bus one at a time.

“So when the bus arrives but before it thinks of stopping. They’ll be first in the queue due to their nefarious plotting.

“Bags, trollies and brollies are widely used. To get their owners to the front of the queue.”

Why are UK Buses so Overcrowded? 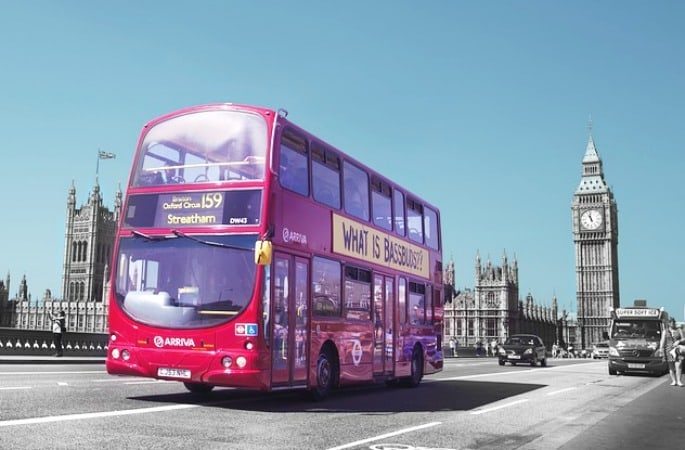 The House of Commons, in their Transport Committee report, ‘Overcrowding on Public Transport,‘ found that:

“Free pm peak time for pensioners overlaps with children coming out of school and adults trying to get home from work.”

While on the other hand, Dr John Disney, a researcher in Transport, at Nottingham Business School, states:

“Modern bus design is a major contributory factor to overcrowding.”

Firstly, buses are not designed for luggage. Secondly, its design encourages passengers to stand near the front of the vehicle:

“Both in the buggy/wheelchair zones and in the gangway. Rather than go to the rear of the bus and/or upstairs.”

As a result: “The bus is perceived as overcrowded even if its load is less than its seating capacity,” he says.

Further, time is another key dimension, resulting in bus bunching.

This is the case when, two or more buses arrive at the same time, in the same location, for the same route. Because one of them failed to keep to its original schedule.

We’ve all experienced it. Standing at the bus stop, waiting for the worst wait.

Worse than the wait at the GP? Where at least the surgery staffs have provided magazines to make the wait feel shorter?

It’s worse than waiting for the food at the restaurant, where at least you have some hope for a discount on your bill. Or, even a free starter dish?

However, the UK bus wait is invisible. It could be a minute away. Or, it could even be 30 minutes away. And, you’re stretching your neck around the corner, hoping for the first glimpse of that packed storage container.

Although, UK buses have not reached the vision of passengers hanging from the doorways and sitting on the roofs. But, many of the South Asian aspects may not be far.

Nevertheless, the bus is the main mode of transport, carrying characters from all walks of life.

If you think your commute is bad? Just take a look at the insanely overcrowded buses of South Asia, you might feel a little less claustrophobic!