Choreographer Ganesh Acharya has revealed that he has lost 98 kilograms in what is an inspiring weight loss transformation.

"I am shedding that weight now."

Choreographer Ganesh Acharya has undergone a dramatic weight loss transformation and revealed that he has lost 98kg.

In the past, celebrities like Adnan Sami and Ram Kapoor have shared their inspiring weight loss stories and now, Ganesh has done the same.

The Bollywood choreographer appeared on The Kapil Sharma Show and made the revelation.

A preview of the episode showed host Kapil Sharma pointing out the weight loss and asking about it. When Ganesh responds, Kapil jokes:

It was revealed that Ganesh used to weigh around 200kg but has been following a strict workout regime but admitted that the journey has not been easy.

Ganesh has been training under Ajay Naidu and has not looked back since.

It was reported that he decided to embark on a weight loss journey in 2015.

Ganesh revealed that he had put on almost 40kg whilst working on the 2015 film Hey Bro.

“I am shedding that weight now.” 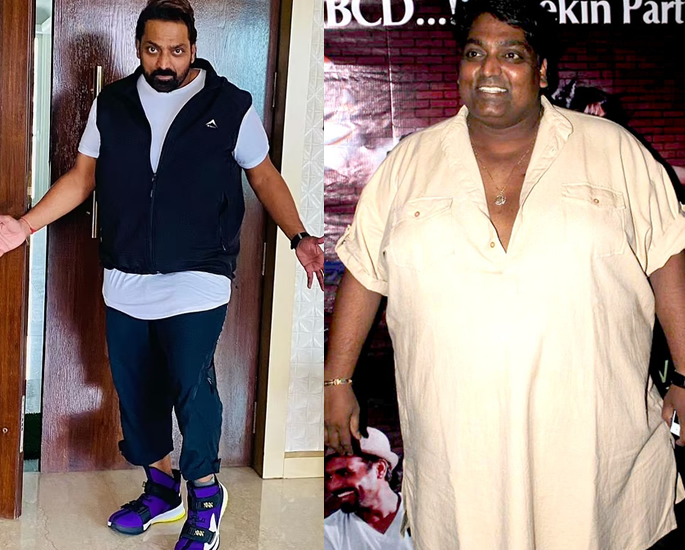 He shared that people had only seen the “fat Ganesh Acharya” and he wanted to change his image.

While he wanted to “show a different version of himself”, Ganesh admitted that the first two months were “challenging” for him.

“It took me 15 days to learn how to float. Slowly, my trainer Ajay Naidu made me do crunches in water.”

“Now, I can execute 11 exercises (like scissors and lateral raises etc.) in succession over a 75-minute routine. It’s exhausting,”

The renowned choreographer also stated that the weight loss has made him feel a “difference”.

“I danced even when I had so much weight, but the difference between then and now is that the energy in my dance has doubled.

“Not only this, even the size label of my clothes has moved from 7 XL to L.”

On the work front, Ganesh has choreographed tracks for Akshay Kumar’s Bell Bottom and Laxmii as well as Varun Dhawan’s Coolie No 1.

Dhiren is a journalism graduate with a passion for gaming, watching films and sports. He also enjoys cooking from time to time. His motto is to “Live life one day at a time.”
Are Indian Women Afraid of Exercising in Public?
British Asians and the Use of Sex Clinics