Breakup, Makeup, and a Proposal in Desi Rascals

The first series of Desi Rascals is nearly over and it promises to end with a bang. The eleventh episode sees emotional twists and turns, as the plot thickens. DESIblitz has more.

"Baby, you are my everything. My life. My world. My universe."

In the eleventh episode of Desi Rascals, Yasmin follows in the footsteps of Shmoyel and hosts her very own launch party.

There has been trouble in paradise for Feryal and Owais. Will they be able to patch things up? Or are the wounds too deep?

With tensions rising between the Baigs and the Shahs, is it #NoJo for #MoJo?

And Akshay has been dithering over that proposal to Arshina, for, like, ever!

Yasmin wants to involve her girlfriends, Kavita and Arshina, in her beauty launch. She briefs them:

“My brand is luxury, high end, elegant, it’s beautiful, it kind of describes me…Just tailor it to me.”

Yasmin would like Arshina and her Bollywood Angels to perform. But just as they are ready to go on stage, Akshay whisks Arshina off to the roof which is littered with candles and lights. Could this be it?!

Akshay says: “Everyday I look at you, I fall in love with you all over again. Baby, you are my everything. My life. My world. My universe.

“Will you…[gets down on one knee]…marry me?” And opens the box to reveal the ring. Wow!

Kavita and Yasmin continue to make digs behind Arshina’s back as they have all night.

Although happy for her daughter, Mother Jyoti is concerned about losing her. She says: “Promise me one thing. Don’t live too far from me.”

That might be difficult, as Akshay is from Birmingham.

Feryal breaks up with Owais 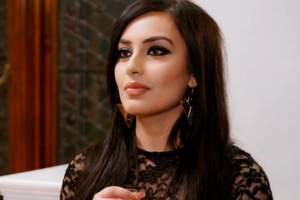 Rita and Feryal now appear to be besties after bonding over Owais and his bullying ways.

When Anj speaks to Owais, he does not mince his words: “Feryal’s like a sister to me. And I feel like you disrespected her.” Boom!

Owais is trying to blame it all on Rita. But Anj is having none of it: “I think it’s best you and Feryal just finish it, before anyone else gets hurt.” Ouch!

Owais’ pride takes another hit when an old friend, Arun, interrupts the Owais Show at the bar. He says: “He’s got game. He’s slick. Just not Arun though, is he?”

At the party, Feryal begins the break-up conversation with Owais. He tries to deflect the attention to Rita, but to no avail.

Feryal says: “This is not about Rita anymore. It’s well past that now…It’s the way you talk to me.”

Feryal ends it: “I’m going to walk away. We were not meant for each other.” The anguish is written all over his face. 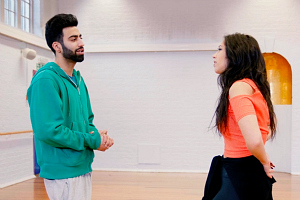 Anj tells Moses straight that #MoJo is a ‘#NoJo’: “I don’t think her Dad’s impressed. He thinks you’re a bit of a waste.”

Mo is hurt that the Shahs are completely enamoured by Shmoyel, which shows that ‘culture’ is not the problem.

MoJo had planned to combine both of their passions by teaching a BollyZumba class. But Mo is nowhere to be seen.

He meets Jo at the end to explain: “I felt like I needed some time out.

“I don’t know what I’ve done to hurt Manoj that much. Because I would do anything for your family…That’s why it hurt even more. I thought he was a nice caring dad.”

Mo looks like he is about to cry, and Jo is moved by his words.

Nat’s not the only one who likes Shmoyel 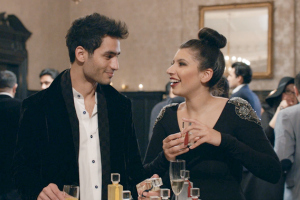 Nat and Shmoyel are living in some weird utopia where boys and girls can be friends. They are high-fiving each other, going to BollyZumba classes together, and being all platonic. Yuck!

Nat says to Shmoyel: “Manoj would literally love it if you were his ‘shon-in-law’.” Yes, even if Shmoyel doesn’t, we get the hint, Nat.

Their laughter about the ‘Sh-Manoj’ bromance is interrupted by…Feryal. She (get this!) wants a word with Shmoyel. Wonder what about?

Feisty Feryal has already gotten over Owais and asks out Shmoyel: “I’d love to hang out with you a little bit more.”

For Shmoyel, this is obvs totez awkz. So he just friend-zones her: “Yeah sure, let’s hang out. [They bro fist.] Let’s bud that.” Sorted.

Also, in the eleventh episode, Anu and Amita dive into Desi Speed Dating with mixed fortunes.

And Rish and Raj are at it again and fool Kavita with another fantastical fable (Remember the one about them being conjoined twins?)

Manoj makes up with the Baigs 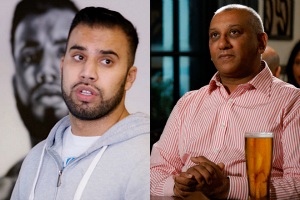 Over a Desi Dad bonding session at the pub with Jay, Manoj says: “Maybe I should meet with Moses and get to know him a little bit better.”

At the Shahdashians, mum Celia listens to Jo’s concerns and agrees that Moses should be given a chance.

Manoj goes to Pure Muscles Gym to see Moses and to clear the air. Moses is not there, but older brother Anj has his back: “He sees you as family. He was really hurt.”

Manoj says: “I didn’t realise…I’m here for you.” He and and a tearful Anj hug it out! Do MoJo live to fight (love) another day?!

You can catch the Season Finale on Friday 27th February 2015 at 8pm on SkyLiving.

We here at DESIblitz will continue to campaign for a second series of Desi Rascals. If you would like to support this campaign, use the hashtag #DesiRascalsSeries2 on social media.

Why are the #OscarsSoWhite?
Honour Killing is a British Bollywood Drama