"I thought it was my duty to check her out, but not like that."

The first ever episode of Desi Rascals aired on Sky Living HD on Tuesday 20th January 2015.

Produced by Gurinder Chadha, the show encapsulates today’s British Asian community in a unique way – and there were certainly elements that all of us could relate to.

Taking on the popular and well-rehearsed formats of The Only Way is Essex and Made in Chelsea, Desi Rascals follows the lives, loves and opinions of a modern British Asian community from West London.

As to be expected, much of the episode was centred on the strong nucleus of the Desi family.

We have the Vara family and their two sons Sunjay and Prakash who run a car garage; the Shahs with Manoj and Celia (a very liberal interracial couple!) looking to find suitors for their two daughters Jo and Natalie; and the Patel family with Shreekant, a sweet Indian father whose daughter Shreena is about to marry the love of her life, Prakash. 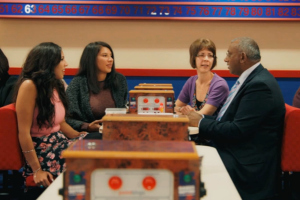 Of course, there can be no better representation of Asian culture without a big fat Desi wedding, and in true ‘GC’ style, ‘Shreena weds Prakash’ had all the elements of Indian flair and glamour that we could hope for.

The emotional Vara-Patel union takes place in a grand white marquee, hosted within the quintessential English countryside, complete with dhol players and a classic Indian bride dressed in red.

But long gone are the days of the shy Desi bride. Shreena certainly represents the modern British Asian woman, one who is not afraid to speak her mind, whatever situation she finds herself in – in between the rukhsati tears and goodbye hugs, Shreena tells her mum: “Sorry for being a bitch! I know I get it from you.”

Could she be facing a turbulent relationship with future mother-in-law Anita? Anita is another strong-minded woman who is used to having things done her way. And as husband Jay reminds her, two women in one household might create a few hostile sparks. Cue Indian family ‘Saas-bahu’ drama with a British twist! 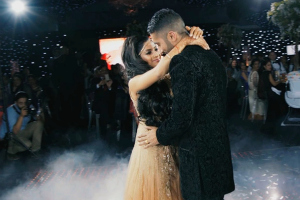 Apart from the families, we also have a group of young good-looking guys and girls, all single and ready to mingle.

Even from the opening sequence, it is clear that female (and some male) viewers will be content with the healthy quotient of metrosexual testosterone on the show.

Taking on the stereotype that Desi girls love beauty and Desi boys live for the gym, the number of abs on display in this episode should have come with a disclaimer.

We have the likes of gym owner and fitness obsessive Anj (motto: “Gym, Trim, Shave, Rave”), and straight-cut Moses discussing the ideal male body size (how big is too big?) in between their weight lifting sets.

The duo that really make an impression however are the supremely confident Owais, and model Shmoyel. 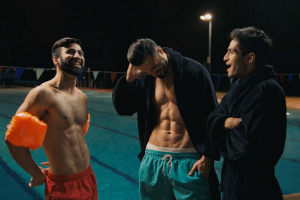 The well-groomed pair couldn’t wait to show off their surfboard abs as they went for a quick swim with Moses in the freezing London weather.

While pair enjoy a lot of laughs, we were later all shocked to see how quick Owais was to step on Shmoyel’s toes just as he was chatting to beautiful Yasmin at the wedding. Could there be some rivalry between the two as the show continues?

Another confident Desi is Naman, who is sure to spark some controversy being the only open Gay Asian (Gaysian) on the show. Speaking to single mum Amita, he talks about the difficulties he faces in finding the right guy and being accepted by the community – can he ever have the big fat Gaysian wedding that he dreams of?

Amita believes he could be one of the first to break through the stigma of homosexuality in the Asian community. Viewer Navpreet Grewal tweeted out about Naman: “Love that guy for being so open that he is gay! Love when people aren’t ashamed to hide there sexual preference. #DesiRascals.”

Also in the limelight are brothers and best friends Sunjay and Prakash. While the divorced Sunjay loves that his little bro is getting married, did we hint a sense of jealousy on his side? 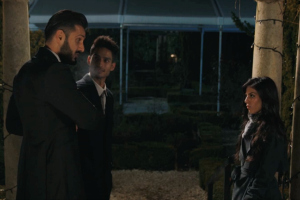 The cheeky Londoner is keen to lay down some ground rules for future sister-in-law Shreena, and we get the feeling that he may be more high maintenance than mum Anita.

His best man speech started with: “When I heard about Shreena, I thought it was my duty to check her out, but not like that.”

Overall the opening episode left us much to think about, and many viewers later took to Twitter to express their opinions on this modern take of British Asian reality TV. Nikita tweeted:

“@GurinderC so much respect for you! Keep breaking those barriers and representing us! Really enjoyed it. #CreativeGenius #DesiRascals.”

It is clear the Gurinder is keen to break down the stereotypes of Asian culture and people with a fresh approach. Desi Rascals seems to celebrate the integration of Asians in British society without being too obvious about it.

What is also great is Gurinder’s decision to bring out social issues that we can all relate to. Whether it is dating, in-laws, divorce or homosexuality, Chadha shows how much the Asian community has evolved over the years.

This is certainly a series to keep an eye on. The second episode of Desi Rascals airs on Friday 23rd January 2015 at 8pm on Sky Living.