Avengers: Endgame Director in talks with Priyanka Chopra for Film?

It seems that Avengers: Endgame director Joe Russo wants to work with Priyanka Chopra. It is reported that he is talks with the actress for a film.

"We would just play that recording and get reinspired."

It looks as if Hollywood director Joe Russo is in talks with Priyanka Chopra in a future project after expressing his desire to work with her.

Joe, who has co-directed upcoming superhero blockbuster Avengers: Endgame alongside his brother Anthony Russo, was in Mumbai to begin the press tour of the much-awaited film.

He even revealed India’s Marvel Anthem which was composed by AR Rahman.

Russo arrived in India on Saturday, March 30, 2019, with his family and has been enjoying his time in Mumbai.

He praised India and thanked the fans for their appreciation towards the franchise. Joe called India “the fastest growing market in the world for Marvel”.

He said: “There was a recording of an Indian audience watching the Infinity War and the moment Thor lands, the cheers sounded like a football stadium.

“We used to play that recording whenever we would get tired (working) on Endgame because it took us two years to make that movie.

“We would just play that recording and get reinspired. This response from the audience is why we make these movies. We know there is an excited fanbase here.” 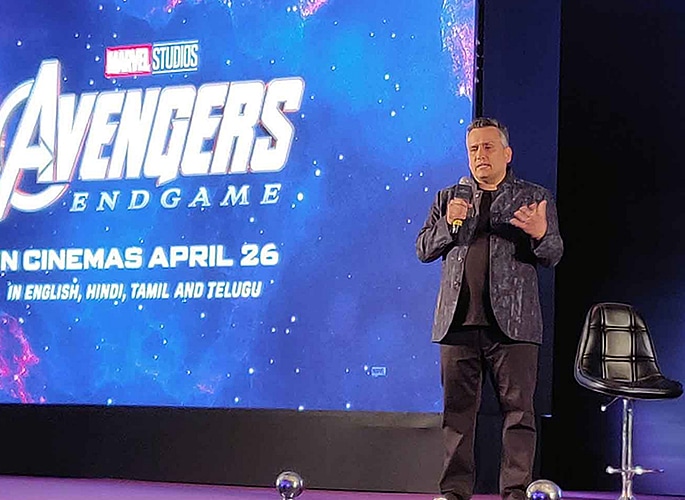 During a group interaction, the filmmaker hinted at working with Priyanka Chopra in the future. He said:

“Priyanka is transitioning into global status now. She is fantastic, I would love to work with her.

“I am potentially talking to Priyanka for something. I am not going to say what it is.”

This could mean an Indian superhero and Russo explained that if Marvel plans to introduce one, he will cast a Bollywood star to play the lead role.

He stated: “I will pick Bollywood stars to play Indian superheroes. I think moving forward, you are going to see a really diverse Marvel universe.

“It is really important for all the audiences around the world because these movies are so global.

“They should be able to identify with a character on the screen. I think you are going to see that really soon.”

In 2018, Marvel Studios chief Kevin Feige had said that they were plans to introduce superhero Ms Marvel aka Kamala Khan.

After news broke about the possible introduction of the Pakistani-American superhero, many fans on social media wanted to see Priyanka take up the role.

Dhiren is a journalism graduate with a passion for gaming, watching films and sports. He also enjoys cooking from time to time. His motto is to “Live life one day at a time.”
10 Top Bollywood Remakes of Hollywood Movies
BritAsia TV Punjabi Film Awards 2019 – Winners & Highlights