Zahid Qureshi is a zealous actor on a cinematic quest for success. The quick-thinker exclusively chats to us about acting and his first award.

"Zahid is a hidden gem who lives a simple village life"

The zippy and quick on the ball actor-line producer, Zahid Qureshi has made his mark in films. This too within a very short space of time.

Despite coming from a political family, his late father Qazi Muhammad Akram Qureshi was a teacher.

Hi late mother, Shah Begum who came a from Mughal family was a housewife. He has five sisters and three brothers.

Zahid and his childhood friends were into films from their academic days. His best friends are actor-director Rahat Kazmi and actor-producer Tariq Khan.

According to Zahid, in 1996, as youngsters, the trio made a low budget feature film. The movie called Zehreelay Naag was made using a small camera.

He plays the younger brother of Chengiz in this film, His character returns to India after studying in the UK. He had a negative role in the film. 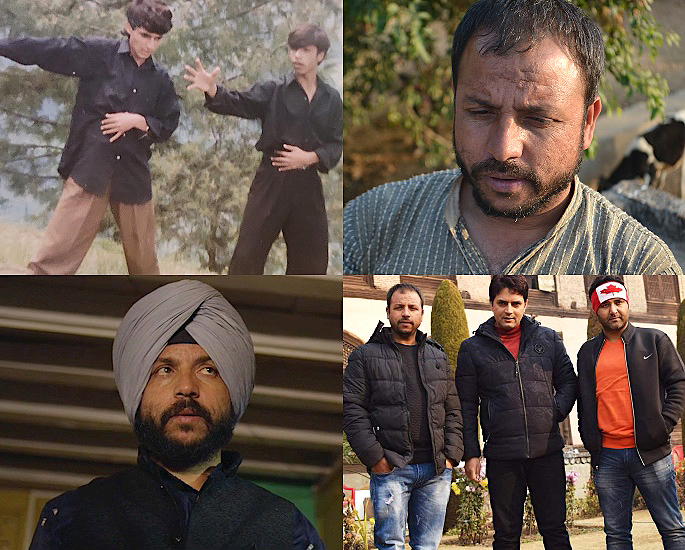 After this film, in 1997, the three school friends headed for Mumbai to pursue their dreams.  Even their families were not aware.

“Zahid, Tariq Khan and me started our struggle together. We came to Mumbai from Poonch. I still remember how people in our village were so happy for us. For them, it was as if we had got some big opportunity.”

He then had a fringe role as a lazy person in the dark historical drama Mantostaan (2017).

Appearing as one of the Muslim boys from the camp, he wishes to play with the honour of Sakina (Sakshi Bhat).

Ever since, Mantostaan, Zahid has gone onto play key supporting acts in his usual spontaneous style. This is quite a contrast, with him not being a method actor.

He has worked with some top names from the Kashmir and Bollywood film industries. Zahid also collected his maiden award from Hollywood for the film Lines in 2020.

Zooming in, DESIblitz presents a quick glance of his career and achievements with exclusive reactions from the film fraternity.

The Zappy and Quick-Witted Actor 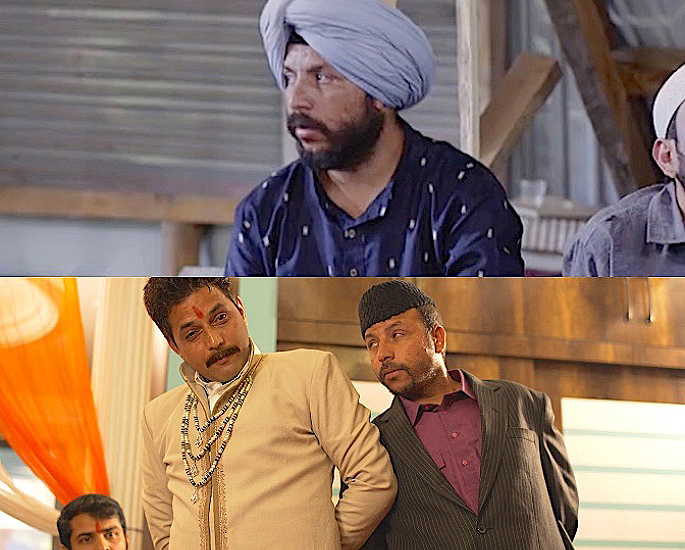 Zahid Qureshi had his first genuine break in the adventure-comedy, Side A & Side B (2018). He plays the rogue Punjabi priest, Sodhi in the film.

But the three do not feature in the lead roles. Rahul Singh is actually portraying Zahid on-screen as Rajan. His character Sodhi enjoys watching Indian films discreetly, indulging also in some dance and liquor.

Zahid then went onto perform the role of the hobbling Kako in the satire film 2 Band Radio (2019).

Despite having a minimal role, as the assistant of Kunwar Udhay Singh (Rahat Kazmi), Zahid showcases his supreme artistry.

Zahid amusingly tells us that he had a very slimy character in this film, playing the munshi (accountant).

“My character tries to cause friction between the villagers and the landowner, wanting to claim authority and position.

Kakko basically wants to fool the zamindar and take his place. Kako shows that he has the upper edge over the landlord, with Kunwar Saab only listening to him.”

Zahid was happy with his overall performance in the film. Even though Zahid was not the lead actor, he shined in the few scenes that featured him.

Zahid has come into his zone, performing the character of Billa in the love story Lines. He reveals more about his two-dimensional character:

“Whilst Billa is not a servant in the house, he does do odd jobs to help out. Even though Billa sees Nazia as his own sister, he sets eyes on her Indian assets.

“He takes steps further at the border, which have serious consequences.”

“Zahid is a hidden gem who lives a simple village life, continuously keeping his artist alive inside.

“While shooting Lines he was fun on set. Everybody used to love his performance on set.”

“I remember director Hussain Khan telling me after the first cut of the film that he is in love with the character Billa that Zahid is playing.

Viewers will have to watch the film to find out the final outcome of Billa and Nazia in the film. 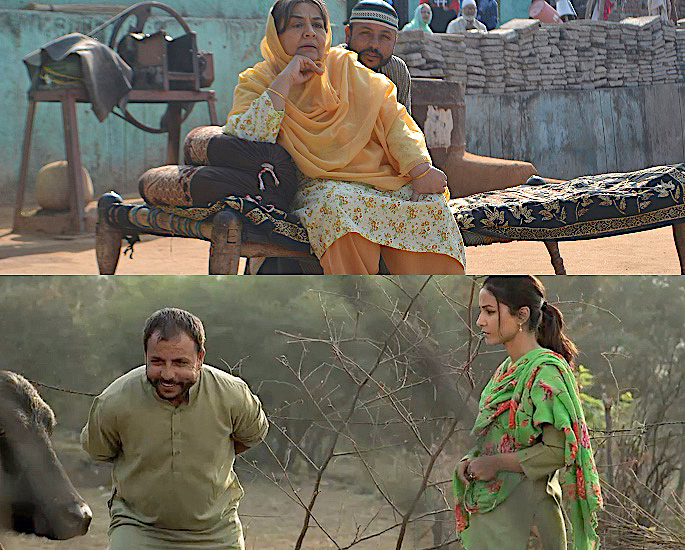 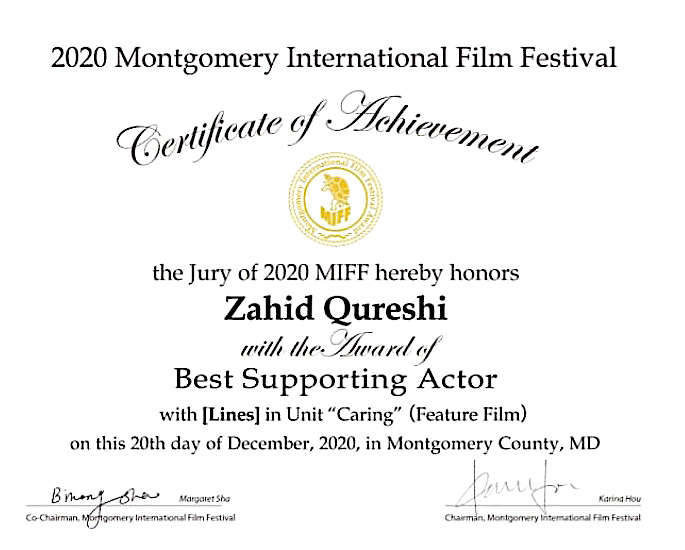 Zahid Qureshi has come in the aforementioned award-winning films, with many screening at festivals worldwide.  He has attended some of the festivals himself.

Side A & Side B and 2 Band Radio were official selections for the 2018 and 2019 editions of the London Asian Film Festival (LAFF).

Besides, having a premiere at LAFF, DESIblitz held a special screening of 2 Band Radio and a riveting Q&A. This took place at Birmingham City University in Spring 2019.

Both films were officially selected at other film festivals around the world too, picking up awards as well.

The challenging COVID-19 year of 2020 came to a finish on a high for Zahid.

His career-defining role in Lines has also earnt him ‘Best Supporting Actor’ at the 2020 Montgomery International Film Festival (MIFF).

Thrilled to win this accolade, Zahid told us what it meant for him and others.

“I am extremely humbled to receive my first award. My friend’s circle is also very happy with this achievement of mine.

“I gave them a big party as a way of thanks for their continuous support.”

“It is wonderful to see Zahid gaining recognition. He was a bundle of laughs on set. More importantly, his acting is superb. His character Billa will be loved by many.” 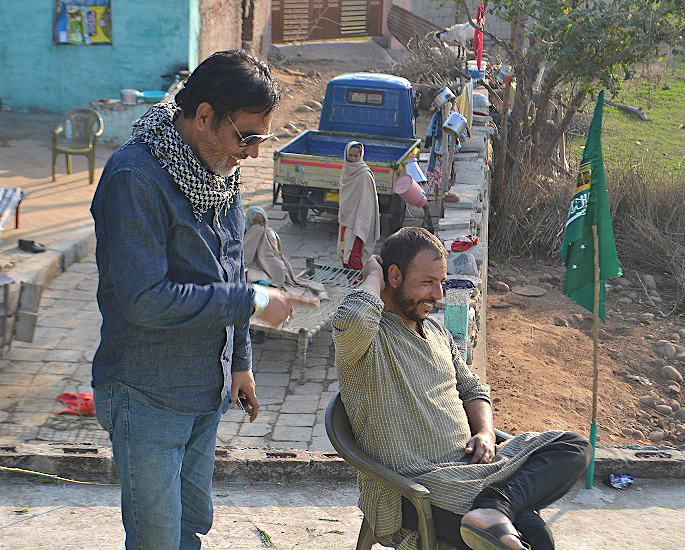 This is the first award for Zahid, with his very best yet to come. It was also a double celebration for team Lines, with Hina Khan bagging ‘Best Actress’ at MIFF 20.

Even though web shows have been a success, Zahid is adamant that he does not wish to foray into this medium.

Zahid is not driven by any financial gains but has a keen interest to play fantastic characters. He will play a prominent role in a film starring Bollywood legend Anil Kapoor.

Besides the film world, Zahid enjoys political activities. Many have faith in him to assist and perhaps lead in the future.

After his paternal uncle, he is also next in line to politically take over. Zahid Qureshi is a talented individual who has a quench to succeed in both films and politics.

Faisal has creative experience in the fusion of media and communication and research which increase awareness of global issues in post-conflict, emerging and democratic societies. His life motto is: "persevere, for success is near..."
Kapil Sharma reveals Netflix Debut ‘Close to his Heart’
Ayesha Omer slams Troll who criticised Outfit Choice