Comedian Kapil Sharma announced that he will be making his Netflix debut. He has said the project is “close to his heart”.

Kapil Sharma has revealed that he will be making his Netflix debut soon and fans cannot wait.

The comedian shared the news on social media and followed it with a video announcement in his own typical style.

It is not known what the show will be about but in the video, Kapil is seen struggling to pronounce the word ‘auspicious’ during a shoot.

When the director asks him to say his lines in Hindi instead, the comedian responds:

“Don’t believe the rumours guys, only believe me. I’m coming on Netflix India soon. This is the auspicious news.”

“I am super excited for my first-ever association with Netflix.

“2020 has been a bumpy ride for everyone around the world and my motive is to make people forget their worries and welcome this new year with love, laughter, and positivity.

“I always wanted to be on Netflix but I didn’t have their number.

“It’s a project close to my heart and I cannot wait to share more details with my fans soon.”

Following the announcement of his Netflix debut, netizens posted their reactions to the “auspicious news”.

One person wrote: “He never fails to make us happy with his work! This time he’s coming with something new and I’m sure that it’s gonna entertain all of us in the best way!

“All the best Kapil Sharma for your digital debut! We love you & we are very excited for this!”

Another person said: “Digital debut that too with Netflix… woohoo.”

One person said: “All the best Kapil Sharma sir. You are ruling like a King… Now you are coming on web. We are sure that you are going to rock on digital platform too.”

On January 4, 2021, Kapil had teased the new project with a cryptic tweet.

While many offered their best wishes to Kapil, others wondered what he was talking about and were eager to find out.

Some even correctly predicted that Kapil would be announcing a new project.

While details are not yet known, only time will tell what Kapil’s Netflix project will be about. 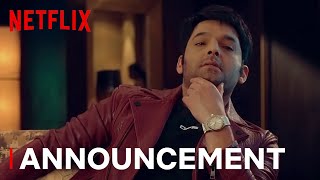 Dhiren is a journalism graduate with a passion for gaming, watching films and sports. He also enjoys cooking from time to time. His motto is to “Live life one day at a time.”
Vanita Kharat poses Nude for Body Positivity
Zahid Qureshi: An Actor of Great Zeal & Quick Thinking