A Virat Kohli painting has been bought for a whopping £2.9 million by entrepreneur Poonam Gupta. The painting depicts the cricketer’s 10-year IPL journey.

"I take a rare masterpiece to my home and also help this noble cause in my own way."

A UK entrepreneur has bought a Virat Kohli painting for a staggering £2.9million!

It also contains handprints from Virat Kohli himself, as well as other legends such as Ben Stokes and Sachin Tendulkar.

Poonam Gupta, pleased with her purchase, spoke on why she decided to buy the Virat Kohli painting. She revealed:

“What I like about this young generation of Indian cricketers is that they are responsible and want to make difference on and off the field. I am very connected to the cause taken up by Virat.

“Slavery has no place in this world and we need to stand up and do our bit. I am glad Virat has come forward against this evil and by buying this magnificent piece of art created by my favourite artist [Sacha Jafri], I tick two boxes.

“I take a rare masterpiece to my home and also help this noble cause in my own way.” 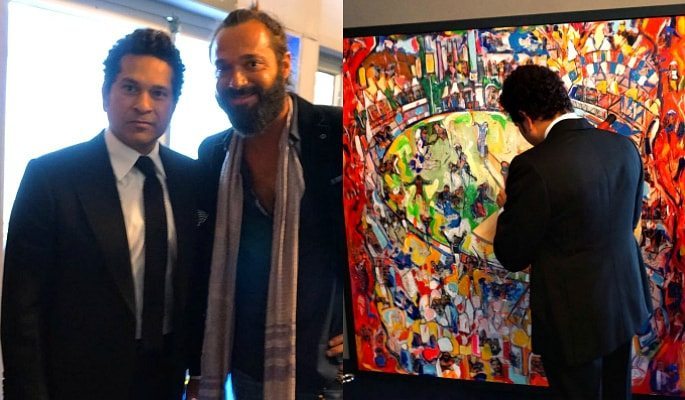 Many may not know much of Poonam Gupta, but she has enjoyed a successful business career. Born originally in Delhi, she moved to Scotland in 2012.

In the following year, she launched her own business called PG Paper Company Ltd. Focused on reusing waste products, the company imports and exports products from roughly 52 countries.

The entrepreneur also works in various charitable causes, such as gender equality, education and animal conservation. In 2017, she founded Women’s Business Mentoring, which aims to support women embarking on successful careers.

With achieves in both business and charity, Poonam has received many honours, including an OBE in the New Year Honours List 2017. And now she has become the owner of this spectacular Virat Kohli painting.

The man behind the painting, Sacha Jafri, has worked alongside many famous sports stars in the past. These include David Beckham, MS Dhoni and Yuvraj Singh.

He is currently working on a frame to accompany his work.

Composed of 14 bats, they will feature the signatures of famous cricketing legends. Once the frame is completed, this work of art will truly hail as fantastic memorabilia for cricket.