The New Year brings with it the Honours List for 2017, recognising key individuals across the UK. Many British Asian men and women have also been honoured.

Released on 30th December 2016, the New Year Honours 2017 recognised the impeccable achievements of outstanding men and women across the UK.

A total of 1,197 people received an award. In particular, the bi-annual list saw a record number of British Asian individuals from all sectors of the local community, sport, arts, business and technology be honoured with a British Empire medal and title.

Of the recipients, 9.3 percent of the successful candidates came from a BAME background, making just over 111 names in total.

Women were also equally awarded alongside their male counterparts with 603 making the list.

Professor Shankar Balasubramanian was the only British Asian to be awarded a Knighthood this year for services to Science and Medicine. The University of Cambridge professor was, in fact, joined by the well-known marathon runner, Mo Farah who received a knighthood for services to Athletics.

One notable recipient was football coach and active community member, Manisha Tailor for her services to Football and Diversity in Sport. Tailor, who bravely spoke out about cultural stigmas around mental illness with DESIblitz has spent many years encouraging young British Asians and non-Asians to overcome barriers in sport and football.

Manisha tweeted out her thanks and gratitude on social media, where she gave special mentions to those who had supported her over the years:

Thrilled to have received an MBE for Services to Football & Diversity in Sport ?. THANK YOU ?? #MBEhttps://t.co/DuIoSic050 #NewYearsHonours pic.twitter.com/Z5W7j8NYNV

Joining Manisha is a fellow sportswoman, Saba Nasim, who received a BEM for services to Cricket and Young People. For the past several years, Saba has been working to encourage grassroots cricket among girls in East London.

Saba says: “It feels amazing to have received this award and to know that the work I am doing at the grassroots level is being recognised at a national level.

“I hope to use sport as a vehicle to drive change in the community, promote social cohesion and empower young people to become respectable role models themselves.”

Some familiar names from the Arts and Cultural sectors also made the list. In particular, theatre heavyweight Jatinder Verma who co-founded Tara Arts. Verma was awarded an MBE for services to Diversity in the Arts, particularly Drama.

Jatinder Verma is widely recognised as ‘the Godfather’ of British Asian theatre, having been an avid creator and director of cutting-edge cultural drama since 1977. Verma saw drama and theatre as a way of combating racist attitudes and inspire many ethnic minorities to speak on a public platform.

Joining Verma, with a BEM is dhol master, Gurcharan Mall for services to British Asian Music and Performing Arts. Also known as King G Mall, the musician has been an integral influence on the Bhangra music industry for decades. 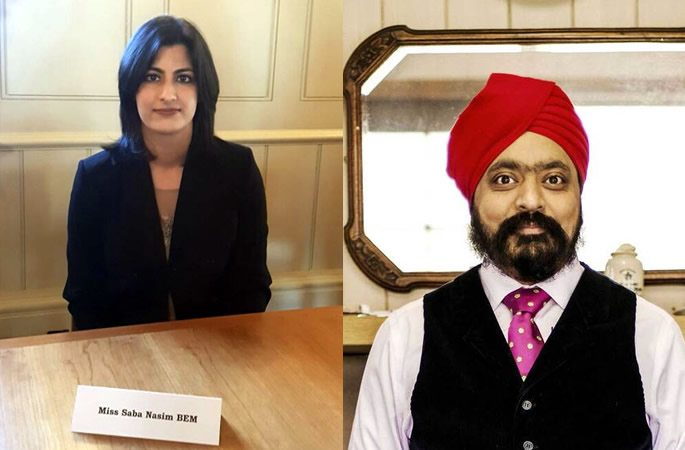 Making dhol popular across the world, he has been a key member of numerous Bhangra groups over the years including, Apna Sangeet, Nachdey Hasdey, Nachda Sansaar, Dhol Blasters, Bhangra Blasters and Band Baja.

Prominent TV Chef and Scottish personality Tony Singh was also given an MBE for services to the Food and Drink Industry and charity.

74 percent of candidates in the New Year’s Honours list were given in accordance with outstanding work in local communities. In particular, a number of British Asians were recognised for their work with interfaith communities.

Jasvir Singh of City Sikhs received an OBE for voluntary service to Faith Communities and Social Cohesion, Dr Brinder Singh Mahnon, an OBE for services at Nishkam School Trust, and Mrs Sharan Ghuman an MBE for the safeguarding of vulnerable people.

Here are most of the British Asians and South Asians who have been recognised in the New Year’s Honours List 2017:

At a time where diversity and multicultural attitudes are at the forefront of socio-political thought, these key individuals display the vital contributions that Asians have made in British society and local communities.

Congratulations to all of the honoraries!