Bikram Yoga the £60 million empire created by Bikram Choudhury now belongs to Miss Minakshi Jafa-Bodden after sex case against him.

"I started off working for him and I ended up with his company."

Bikram Choudhury, the once owner of Bikram Yoga and a man behind a £60 million worldwide empire, has lost it all to former employee, Miss Minakshi Jafa-Bodden.

According to The Mail on Sunday, the yoga instructor, known as the ‘yogi to the stars’, lost his empire in a Los Angles court further to a £6.4 million sexual harassment case brought against him by Miss Jafa-Bodden, aged 47 and a lawyer, educated in Oxford and Birmingham.

Bikram Yoga was established by Choudhary by using his technique of ‘hot yoga’. Where followers of his methods would do yoga exercises in high temperatures of 105F. Celebrities like Lady Gaga, Madonna, Andy Murray, Gwyneth Paltrow and David Beckham are amongst the names who used his services.

Choudhury was born in Kolkata, India, and went on to become a huge name in yoga, using his specialist techniques of 90-minute workouts in heat. His business model resulted in him creating 700 franchises by training students in Bikram Yoga and charging them around £13,500 for the use of his name.

All 700 of the franchises are now under the ownership of Miss Jafa-Bodden. In addition, she has been granted a huge fleet of 43 luxury and expensive sports cars including Ferraris and Rolls Royces. However, the cars are yet to be located.

Miss Jafa-Bodden joined Bikram Yoga in 2011, heading its legal and international affairs on a £90,000 salary.

In the role, she began to realise that Choudhury was not the man he professed to be and there was a very dark and predator side to him. As his wealth and fame increased so did his ego and lechery.

He boasted with statements like 5,000 women were ‘begging’ to have sex with him and a drop of his sperm was ‘worth a million dollars’. This resulted in him preying on his innocent female followers for sexual gratification.

Speaking of his lewd and demeaning nature, Miss Jafa-Bodden told The Mail on Sunday:

“He can be very charming when you first meet him, but that didn’t last long.

“There were allegations of rape and assault. Perhaps the first complaint was a surprise but then I began to see a pattern. He told me to ‘fix’ these women, but when I refused to cover up his alleged crimes, he became abusive, calling me a ‘f***ing bitch”. 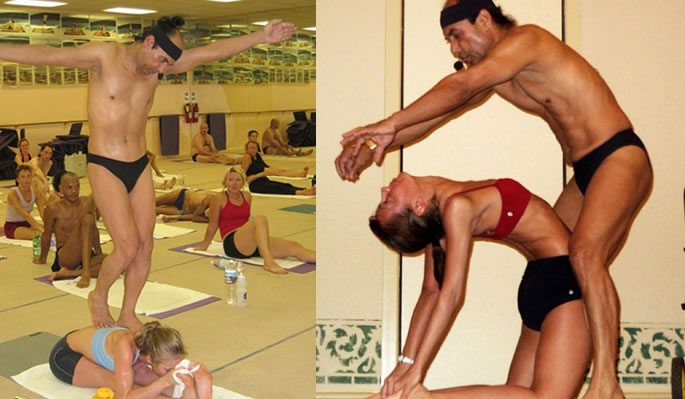 Describing scenes from his classes, she said:

“He would sit on a throne at the front of this vast room filled with trainees. During lectures, the throne would be lowered. There would be a girl stroking his hair, another massaging his back and another stroking him under orange towels that would be placed on his lap.

“It was disgusting, but it was a daily occurrence. He is a cold, calculating predator. I witnessed him routinely abusing that power, often with the most vulnerable students.

“These were young women who looked up to him as a spiritual guru. They loved him. And he took advantage of that in the most heinous way imaginable.”

Miss Jafa-Bodden states Choudhary also made advances on her, for example, during a meeting, he asked her to join him in bed.

After the outcome of the LA Superior Court ruling, Miss Jafa-Bodden said:

“Bikram is no longer the boss of Bikram Yoga. I am. I’ve been to hell and back, but the jury has spoken. Bikram has tried to conceal assets and has fled America, but justice will be done.”

She added: “I started off working for him and I ended up with his company.”

Bikram Choudhury is known to be now residing back in India. Mark L. Shane representing Choudhary made no comments on the outcome.

Nazhat is an ambitious 'Desi' woman with interests in news and lifestyle. As a writer with a determined journalistic flair, she firmly believes in the motto "an investment in knowledge pays the best interest," by Benjamin Franklin.
Asians on New Year Honours List 2017
British Asian Students doing well in studies but not Employability