British Asian Students doing well in studies but not Employability

British Asian students are outperforming their counterparts in education, but are still missing out on job opportunities due to discrimination.

Their careers are being hindered by their ethnic origins.

British Asian students are performing better than their counterparts in education, but performing lower in employability success.

The children of Bangladeshi and Pakistani backgrounds are outperforming other ethnic groups, including white children in educational practices.

A report by the Government’s Social Mobility Commission found that workplace discrimination occurred more so towards Asian ethnic groups – in particular Muslim women.

These Asian women are earning less on average from those in different ethnic groups. Their careers are being hindered by their ethnic origins.

British Asian students may be doing better. But, are less likely to achieve higher job titles such as managerial positions.

The report was published in November 2016 and commissioned by think-tank groups LKMco and Education Datalab. Alan Milburn – the commission’s chair, said:

“It is striking that many of the groups that are doing best at school for improving their results the most are losing out when it comes to jobs and opportunities in later life.”

Milburn rendered Britain a long way from equality in the jobs market towards Asian ethnic groups. He said:

“The British Social Mobility promise is that hard work will be rewarded. This research suggests that promise is being broken for too many people in our society.

The same minority ethnic groups also out-performed White working class children in English tests. With the White children at the bottom of the scores, Asian ethnic groups were doing better at GCSE.

One study mentioned by The Guardian claimed Indian children were more likely to do their homework 5 days a week, and have access to facilities such as a PC at home.

There was found to be higher engagement in Pakistani and Bangladeshi families.

The report’s head author, Bart Show said discrimination amongst culture, geography and family support and expectations were part of the gaps. He said:

“Meanwhile in education, differences arise from access to schools, teachers’ perceptions of behaviour and practices such as tiering and setting. Out-of-school factors such as parental expectations and support also play a critical role.”

The report also suggests that minority ethnic group’s parents may pay more attention to their children’s schooling and lend more support than those of white working class parents.

Researchers suggested that working class White parents: “Tend to be less engaged in their children’s education than other ethnic groups.”

This may be because British Asian students are pressured more at home to perform well at school. Because Indian, Bangladeshi and Pakistani parents have not all necessarily had the chance to attend school. Therefore, they push their children into higher forms of education.

It was reported that 5 in 10 Bangladeshi students attend University. This is compared to just 1 in 10 for White students. 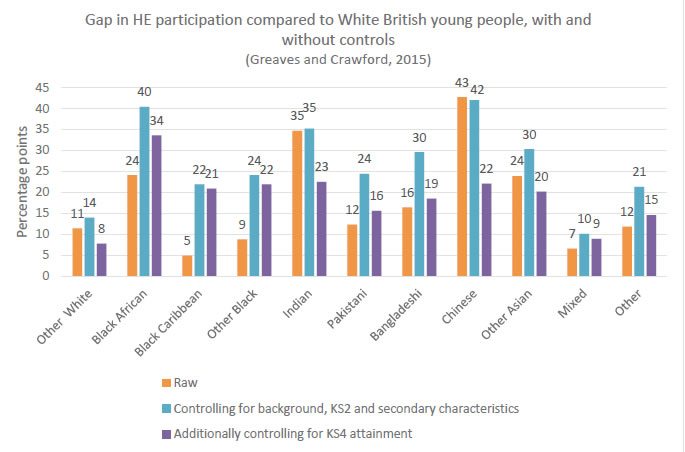 This graph shows the percentage points of each ethnicity entering Higher Education (HE) with and without controls. The controls include KS2 and secondary characteristics and other control from KS4 attainment.

The graph above shows that Ethnic minorities such as Indian, Pakistani, Indian and Chinese, perform even higher at HE with the controls included. This is compared with White ethnic groups, where the gap between raw and controlled factors is still small, suggesting there is not much impact after KS2 and 4 attainments.

According to a study by (Johnson & Kossykh 2008), Ethnic minorities parents are more likely to encourage their children to enter HE due to the economic disadvantages they already face.  The parents of the Pakistani, Indian and Bangladeshi students are likely to be migrants.

The parents of the Pakistani, Indian and Bangladeshi students are likely to be migrants. This explains why they be more encouraging towards HE as a way of escaping these stereotypical views, as English may not always be the first language to all.

One key recommendation in the report is that more support is given to British Asian women and students to achieve their career ambitions, by schools, universities and by employers and not to discriminate against them due to their background, or even their appearance.

Alima is a free-spirited writer, aspiring novelist and insanely weird Lewis Hamilton fan. She's a Shakespeare enthusiast, with a view: "If it were easy, everyone would do it." (Loki)
Bikram Yoga Sex Case gives Minakshi Jafa-Bodden his Empire
Is there a UK ‘North-South’ Divide for British Asians?