Gurcharan Mall, one of the greatest dhol players, orchestrated the world record for Bhangra with largest Bhangra dance event in 2012.

Guinness World Records are the most respected type of record in the world and 2012 was a year when Bhangra dancing made it to the record books. The Summer of 2012 witnessed a fantastic dance event that will be evergreen until it is attempted again. A world record for Bhangra.

The record for the largest number of Bhangra dancers doing synchronised dance routines in one place, took place in Sandwell, a metropolitan borough of the West Midlands and the successful record breaking event rounded up a perfect 2012 for Bhangra dance.

The Sant Nirankari Mission in Potters Lane in Wednesbury hosted the spectacular record-breaking dance event on 12th August 2012, organised by no other, than Gurcharan Mall of Dhol Blasters fame. 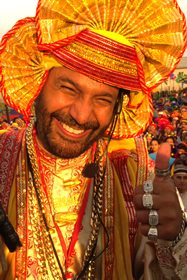 Also known as King G, Gurcharan took charge of the event dressed is his usual colourful clothing, playing and dancing away to the rhythm of the dhol.

There were more than 450 participants at this event as opposed to the one held in the Indian provincial state of Punjab two years ago.

The original record including 2,100 participants was achieved by the Art of Living Foundation in Ludhiana, India on 11th November 2010.

Dancers who travelled the distance from India, America, Australia, Italy and China joined King G in his pursue to break the record. Hundreds of people from the local community also participated in a race against the clock. On this occasion King G said: “It was so wonderful. Everybody taking part had smiles on their faces.”

Artists such as Roop Samrai and Sardara Singh Gill sang on stage urging participants to dance to the rhythm and beat of the dhol. While recognised dholis from various bhangra bands tightly gripped the dynamic crowd, the dancers who led the routines on stage were wooing the sounds back from home.

At the time, King G Mall kept his personal Facebook wall active with regular updates prior to the event. He even uploaded a video of himself onto YouTube, teaching the public his step-by-step routine, for the four different dances everyone was about to perform.

King G sent and forwarded emails around, asking people to join in, increasing the number of participants required at this event. He welcomed literally anybody, including Bhangra Dancers, Giddha Dancers, Belly Dancers, Street Dancers and also people not formally trained in dance.

Potters Lane was filled with hundreds of people dressed in traditional Bhangra and bright folk styled costumes. Representing all communities, thousands of dance lovers turned up to take part in the incredible record-breaking attempt.

The atmosphere was buzzing with liveliness as partakers gathered to sign up to join in the fun. Registration took place before 4pm, with all participants on board practicing a routine together at 5pm. As the rehearsals began, the crowd got into the groove joining in the action, moving together to the loud bangs of the dhol drums.

The weather sided with the spirited crowd as the sun sent a warm glow over the dancers, making their colourful outfits stand out. When the time came for the real thing, everyone was ready to give it there all in hope of dancing their way into the record books. 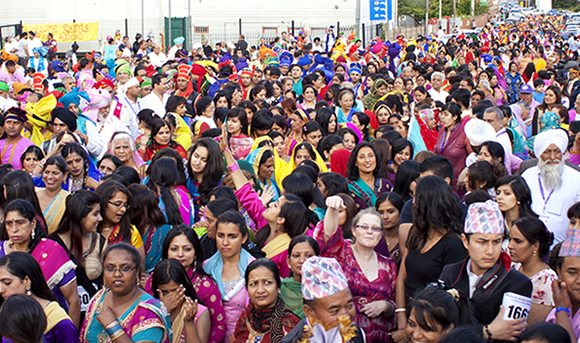 The mass gathering led by King G and accompanied by experienced dance groups, directed each of the four routines. The synchronised crowd went up and down, filling the entire street with colourful moves. Onlookers and passers by cheered on the dancers to break the record.

The dance event, which started at 6.30pm lasted for 13 minutes and was part of the Sandwell Arts Festival.

Everyone was free to join in this event with all participants receiving a certificate and medal at the end.

The record-breaking event was named ‘Dance for the Oneness,’ co-organised by the Sant Nirankari Mission, a religious movement with branches in Birmingham.

This followed a new world record for combined Bhangra and Giddha dancing set at Victoria Park, Smethwick, in June 2012.

Local Vicar of Wednesbury delighted to be at the event said: “We are gathered to celebrate oneness and to hopefully break a World Record.” Terming the event as a huge success he told us that up to 100 saints from Holland were sleeping on the floors inside the church.

Councillor Pat Davies, wife of Keith Davies the Mayor of Sandwell, said: “It was an absolute honour to be here with multicultural faiths to share in what’s going to be a wonderful, successful evening.” 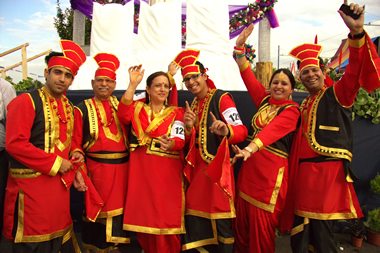 “We are so happy to have broken the World Record, the event was part of a summer long festival which has seen so many people come together from all over the World. Breaking a record leaves a lasting memory for everyone – it was especially great because it happened in the West Midlands.”

Gurcharan Mall was overwhelmed by the support he received and the final outcome of the event. He said: “Many of the people dancing had come over for the International Festival of Oneness at the NIA on Saturday and Sunday. We did this because I like people to talk about our arts and culture in a big way.”

The beat was an important part of these festivities – the beat that is Bhangra. The final tally of people who participated in this successful record was 2,552.

The record was officially broken, giving everyone who participated something to cheer and be happy about. Hats off to King G for managing to organise a brilliant event and one which will be remembered for many years to come.

Records are there to be broken and for now King G along with everyone involved can feel proud of their effort for breaking the world record for Bhangra dancing. Who knows the dhol maestro may be already planning to smash another record in 2013!

Faisal has creative experience in the fusion of media and communication and research which increase awareness of global issues in post-conflict, emerging and democratic societies. His life motto is: "persevere, for success is near..."
2012 UK Asian Music Awards Winners
RDB say ‘We Doin It Big’ with Artists galore