The moment that everyone had been waiting for finally arrived

The UK Asian Music Awards celebrated its 10th anniversary in style by hosting a successful event at the famous Wembley Arena. The event commemorated the best of ‘British Asian Musical Talent,’ including upcoming artists who were making a name in the Industry.

Nominees were very excited on day of the awards, knowing that any one of them could be a winner. The moment that everyone had been waiting for finally arrived.

The venue was jam packed with enthusiastic fans and talented artists from the British Asian music scene. The press and media covering the event eagerly anticipated the arrival of well-known celebrities from around the globe. Special guests at the event included playback singer Rahat Fateh Ali Khan, Bollywood’s Ash King and vocalist Imran Khan.

The awards ceremony this year consisted of eighteen separate categories. Artists were nominated in different categories, a few being named in more than one.

The awards ceremony also featured stars from the TV industry, including Nitin Ganatra who is famous for playing Masood in Eastenders. Losing finalists from the music competition show X Factor were also in attendance.

The event was hosted by BBC Asian Network DJ Tommy Sandhu, who entertained the audiences with his witty humour and style. During the event, there were many fantastic performances on stage. 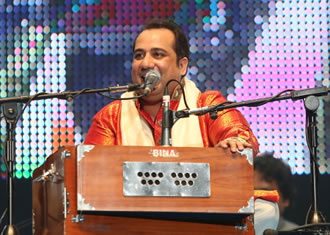 There was a performance from popular rising star Arjun, who won the award for ‘Best Urban Act.’ When asked on how he felt about winning the award he exclusively told DESIBlitz: “It feels amazing to be here, I was presented the award by one of my favourite DJ’s, I am happy to have won it.”

Debut singer Amanjot Sangha who won the ‘Unsigned Award’ also performed on stage. When talking of her performance and winning the award she said: “I am over the moon, it feels like I am in a dream, a few months ago I was just hoping for an opportunity like this to come by.”

Vocalist, Imran Khan from the Netherlands, went on stage singing some of his popular songs, including ‘Amplifier’ and ‘Bewafaa’. Commenting on the 10th anniversary of the AMA’s, Imran Khan said:

“It feels like an accomplishment, it feels like we did something in the industry, its good, and to see what other artists are doing, it’s great.” 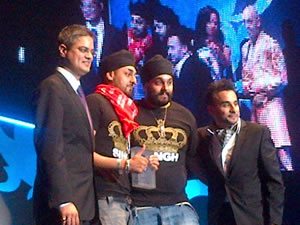 Bollywood’s Ash King enthralled audiences on stage, performing the hit song ‘Te Amo’ from Dum Maaro Dum [2011], as well as songs from Salman Khan’s Bodyguard [2011] and Emraan Hashmi’s latest film Rush [2012]. While speaking with us he said: “It’s my first time here, I did my main songs Te Amo, I Love You, Aunty Ji, Love Is Blind, and I got to do it at Wembley Arena, you can’t win anything more than that.”

Former Eastenders actress and British singer Preeya Kalidas, who won the award for ‘Best Female’ exclusively, told DESIblitz: “I am really overwhelmed by winning this award, two years in a row, and I don’t take this for granted and this means a lot.”

We managed to catch up with many more celebrities on the night to get first-hand reactions from the event.

On stage there was a special tribute to the late Kuldeep Manak by the band RDB. RDB who won awards for ‘Best Desi Act’ and ‘Commitment to the Scene’ said: “We are ecstatic, this is a big award, and we are very happy and we really appreciate all the fans and we want to say thank you to everyone.”

Bollywood Singer Rahat Fateh Ali Khan won three awards, receiving the most number of awards that evening. Along with RDB, British singer-songwriter Jay Sean also picked up two awards. Jay Sean was acknowledged for his musical achievements over the past 10 years, winning the ‘Best Artist Of The Decade’ award.

Here are the winners of the 2012 UK Asian Music Awards:

COMMITMENT TO THE SCENE
RDB

A huge congratulations goes out to all the winners at this year’s event. DESIBlitz looks forward to 2013, when artists will again be honoured for their exceptional achievements and contribution to UK’s Asian music scene. Next year promises to be another exciting year for artists from the music fraternity, both in the UK and worldwide.

Priyal has a huge passion for Bollywood. He adores attending exclusive Bollywood events, being on the sets of films, presenting, interviewing and writing about films. His motto is “If you think negative then negative things will happen to you but if you think positive then you can overcome anything.”
2012 UK Asian Music Awards Nominees
Guinness World Record for Bhangra