The IIFA 2012 Awards took place in Singapore’s Lion City. The big battle was between Zoya Akhtar`s road trip drama ‘Zindagi Na Milegi Dobara’ and ‘Rockstar’ both winning most of the awards. We bring you the results of the winners of these glitzy annual Bollywood awards.

The 13th International Indian Film Academy (IIFA) Awards took place in Lion City, Singapore, on 9th June 2012 at the Singapore Indoor Stadium. The glitzy affair of these auspicious awards had many of the big Bollywood stars at the event.

The Singapore awards extravaganza had the likes of Sonakshi Sinha, Priyanka Chopra, Ranbir Kapoor and Shahid Kapoor performing. They had the crowds buzzing and wooing the golden IIFA stage. 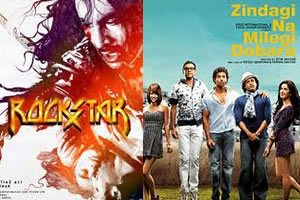 The weekend of activities included the world premiere of Dibakar Banerjee`s political thriller ‘Shanghai,’ the IIFA Rocks concert, a breathtaking fashion show and the glittering award show at the end of the ceremony.

Shahrukh Khan did not make the 2012 IIFA event because he was filming scenes for his new Yash Raj Films project and was be flying to London with family during the weekend. Amitabh Bachchan and his family, regulars at the IIFA until recently, gave the event a miss third time in a row.

Also attending the IIFA’s this year was legendary Norwegian actress Liv Ullmann who showcased her film ‘Liv and Ingmar’ at the event. The IIFA awards this year were presented by Videocon Industries and Wizcraft International Entertainment, and supported by the Singapore Tourism Board.

Here are the winners of the 2012 IIFA awards:

The IIFA’s this year had it all with a strong attendance from the Bollywood film fraternity and some cracking entertainment to keep the audience of the awards hooked throughout the evening. Evidently, the night went to Zindagi Na Milegi Dobara, followed by Rockstar.

Nazhat is an ambitious 'Desi' woman with interests in news and lifestyle. As a writer with a determined journalistic flair, she firmly believes in the motto "an investment in knowledge pays the best interest," by Benjamin Franklin.
London Indian Film Festival 2012
Akshay hits back as Rowdy Rathore