Talent for the UK Asian Music Awards 2012 nominations has been announced. Desiblitz was present on the night, and met up with many of the artists.

The UK Asian Music Awards 2012 Nominations Night, was held at the Grange Hotel in Central London, on Wednesday 12th September 2012.

The stylish venue was flooded with artists from the British Asian Music scene. The event was supported by the press and media, and Desiblitz were exclusively allowed access to all areas and interview all artists.

The first announcement on stage was that there are a total of 12 distinctive categories for the nominations, in which the overall winner will be announced in October at the main event in Wembley Arena.

Solo act Arjun who made his debut in 2010, who is up for Best Urban Act told Desiblitz: “The evening has a nice vibe, its classy and chilled out. I have been feeling what Navin Kundra has done this year, I like the work of Raxtar and Charles Bosco.”

Mumzy Stranger and Brazilian Rapper Agros Santos were present, and when asked about the nominations Mumzy Stranger, who won the award last year for the Best Urban Act, told us: “I never have any hopes, You get nominated for whatever you are good at so it’s up to the fans.”

We managed to catch up with many of the artists attending and find out more about their reactions to the night:

They are collaborating with Mika Singh, when questioned about that they exclusively told us: “Mika Singh is our favourite singer, it’s a fantastic opportunity to work with the Baadshah of Bollywood, its been great fun.” 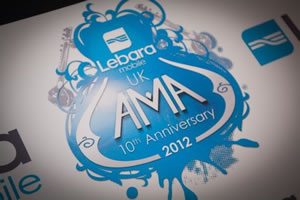 One of the most talked about Artist Banger spoke with us after it was announced he was nominated for best newcomer, he said “ It’s amazing, thank you to everyone loving Punjabi Folk Music.”

When the artists were asked “what artist has impressed them this year and deserves a nomination?” a unanimous answer from most artists was Honey Singh for his fantastic year in music.

This year is a special year for the awards because it is the 10th anniversary of this celebratory event for Asian music. Making it an even more special night for the those who will win and most importantly, taking part.

The invitation only event was enjoyed by all the artists, even those who weren’t nominated left on a positive note and were grateful to be part of an industry that is forever growing stronger.

The UK Asian Music awards is happening on the 25th October in Wembley Arena. The event will feature live on stage, Rahat Fateh Ali Khan, amongst many other fantastic performances and promises to be a major event in the British Asian music calendar.

A huge congratulations to all the nominees, get voting for your favourite artist now!

Priyal has a huge passion for Bollywood. He adores attending exclusive Bollywood events, being on the sets of films, presenting, interviewing and writing about films. His motto is “If you think negative then negative things will happen to you but if you think positive then you can overcome anything.”
BritAsia 2012 Music Awards Winners
2012 UK Asian Music Awards Winners