Indian cricketer Virat Kohli has been announced as a shareholder and brand ambassador for Sport Convo at a press conference held in Delhi, India. Sport Convo is a Social Network, which aims to connect sport’s biggest stars and the fans.

"My belief is sports benefits greatly from social media."

Indian cricket sensation Virat Kohli has become a shareholder in Sport Convo, a social media company which aims to bridge the gap between sports stars and fans.

Virat made his announcement to back the London-based social media start-up on 17th November 2014 at a press conference held at the Pullman Hotel in Delhi, India.

The 26-year-old Delhi-ite has reached 6,000 runs in One Day Internationals (ODI) faster than any other batsmen. He is also the fastest to score twenty ODI centuries. It took his idol, Sachin Tendulkar, Sixty-Four innings more than Virat to reach the same milestone.

Virat has emerged as the new star of Indian cricket, having won the ICC ODI Player of the Year award in 2012. SportsPro Magazine has rated him as the 2nd most marketable athlete in the world. 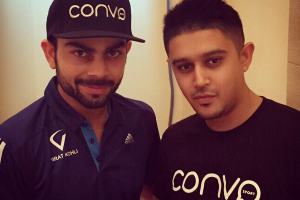 The Sport Convo site, which is yet to be launched, is being developed by a Dehli-based technology company specialising in social media. Private venture capital is providing the bulk of the investment.

Sport Convo aims to be a leading player in sport-specific social media. Virat Kohli, who already has over 22 million followers on social media, sees Sport Convo as an exciting way to connect with his existing followers and millions more.

Speaking exclusively to DESIblitz, Kohli said: “Sport Convo was particularly attractive to me as my belief is sport benefits greatly from social media.

“It provides fans with the opportunity to showcase their opinions and passion for the game. Also allowing me to communicate with my fans quickly and efficiently which is important as a professional cricketer I am always on the go.

“Sport Convo stood out for me and delivers all of this and beyond and that’s why I opted to back this business venture.”

Having recently bought a stake in the FC Goa franchise of the Indian Super League, this is Virat’s second major sports investment.

Alongside being a shareholder in Sport Convo, Virat Kohli will also be the main ambassador and the face of the company in India. 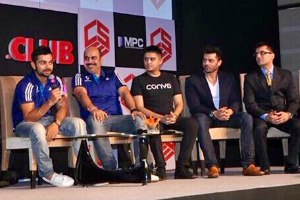 There are already photographs circulating on Twitter, showing Virat proudly endorsing the Sport Convo brand on his clothing, while out with Bollywood actress and girlfriend Anushka Sharma.

The Sport Convo team are delighted to have Virat on board. Vishal Patel also believes that “the unique product concept played a big part in attracting [Virat] to Sport Convo”.

Patel added: “Virat and his management company, CSE Consulting, will help us by taking a hands-on approach with the development of the product as well as the business.

“We have already forged an excellent relationship and I am delighted to have them as partners.

“‘Everybody on the Sport Convo team is a committed sports fan, so this is being built by us as fans for the fans to enjoy and consume all things sport.”

Highlighting his reasons for backing the project, Praveen Reddy said: “We will be working very closely with the Virat Kohli Foundation as well as launching our own foundation to lift the lives of individuals via the medium of sport – something that is very important to me.”

Sport Convo are currently in negotiations with a number of other sports stars to get involved with the venture.

Vishal Patel said: “We have had similar strong responses from top sports stars across a number of major sports and I can confirm we shall be announcing sports talent of the calibre of Virat joining the Sports Convo family in the coming months.”

Already, Sport Convo has revealed on Twitter that English cricketer and hard-hitting batsman, Alex Hales, will endorse a Sport Convo logo on his cricket bat.

Since the advent of Facebook and Twitter, fans have been closer to the sports stars than ever before. It will be interesting to see what new innovations the Sport Convo venture will bring to the experience of sportspeople and fans.

Harvey is a Rock ‘N’ Roll Singh and sports geek who enjoys cooking and travelling. This crazy guy loves to do impressions of different accents. His motto is: “Life is precious, so embrace every moment!”
Moeen Ali made Ambassador by British Asian Trust
Top 10 facts about Indian Super League 2014