The owner of an Indian restaurant that caught fire in the George Floyd protests has backed them, stating that justice is more important.

"Let my building burn. Justice needs to be served"

An Indian restaurant in Minneapolis, USA, caught fire amid the raging protests over the murder of George Floyd.

However, the owner is unfazed by the damage caused to his business, saying that black lives were more important and that “justice needs to be served”.

Family-run Gandhi Mahal Restaurant was severely damaged by fire as it was just doors away from the Third Precinct headquarters of the Minneapolis Police Department, which was set on fire by protestors on May 28, 2020.

Locals have praised the family for their powerful response to their business getting damaged.

Ruhel Islam, the 42-year-old Bangladeshi owner of the restaurant, voiced his support for the protest that closed his family’s “main source of income”.

He said that he and his family could “rebuild and recover”.

Mr Islam went on to say: “Let my building burn. Justice needs to be served, put those officers in jail.”

“Sadly, Gandhi Mahal has caught fire and has been damaged. We won’t lose hope though, I am so grateful for our neighbours who did their best to stand guard and protect Gandhi Mahal.

“Your efforts won’t go unrecognised. Don’t worry about us, we will rebuild and we will recover.

“As I am sitting next to my dad watching the news, I hear him say on the phone ‘let my building burn, justice needs to be served, put those officers in jail’.

“Gandhi Mahal may have felt the flames, but our firey drive to help protect and stand with our community will never die!” 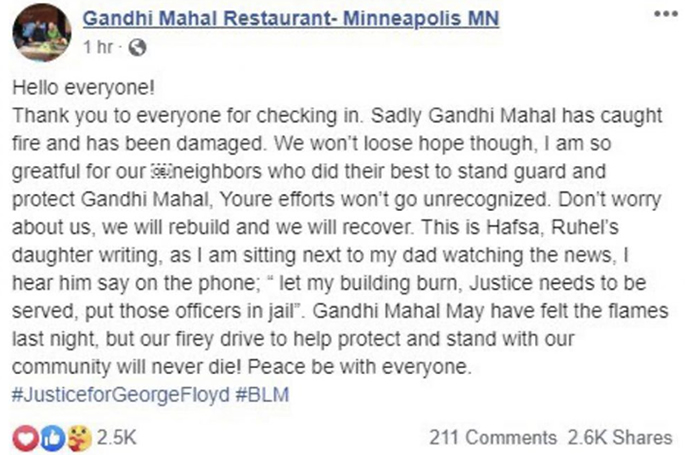 The post was shared thousands of times and a GoFundme page has been set up to help the business.

Protests have gone on across the USA, some violent after video footage showed a white police officer kneeling on George Floyd’s neck for several minutes as he struggled for air saying, “I can’t breathe”.

Many turned to rioting after witnessing systemic racism which resulted in the killing of an unarmed black man.

Mr Islam’s family had put a sign outside their business saying ‘minority-owned’ in the hope that it would avoid any damage.

However, it was burned. Despite the damage, they did not react with anger.

Mr Islam admitted that he found it scary but that “a building can be rebuilt, a human life cannot”.

In another interview, he said that the tension in Minneapolis reminded him of his childhood in Bangladesh when he lived through a dictatorship.

He said that two of his fellow students were killed by police, adding:

“We grew up in a traumatic police state, so I am familiar with this type of situation.”

Mr Islam emphasised with protestors and had been opening his restaurant for medics who set up a makeshift hospital.

Hafsa said she saw at least 200 people coming in and out of the restaurant on both May 26 and 27. Some needed to catch their breath after inhaling tear gas.

Another woman suffered damage to her vision after being hit in the eye with a rubber bullet.

Derek Chauvin, the officer who knelt on George Floyd’s neck, has been charged with third-degree murder.

Protestors are calling for the other three officers involved to be charged also.

Protests have also been witnessed in other countries like the United Kingdom.

Dhiren is a journalism graduate with a passion for gaming, watching films and sports. He also enjoys cooking from time to time. His motto is to “Live life one day at a time.”
Indian Father rapes Daughter aged 13 while in Lockdown
Faryal Makhdoom reacts to Shahroz & Sadaf’s marriage