WWE Champion Jinder Mahal will once again go head-to-head with Randy Orton at WWE’s Battleground. But this time, they will fight in a Punjabi Prison Match!

Jinder also gave a nod to The Great Khali, hailing him as a "giant amongst men".

The WWE Champion Jinder Mahal will face his opponent Randy Orton once again for the prestigious WWE Championship title. However, Mahal has raised the stakes by revealing that they will fight in a Punjabi Prison Match!

The wrestler announced the match’s stipulation on 27th June 2017, on WWE Smackdown Live. The Punjabi Prison Match will take place at the next pay-per-view event, Battleground, on 23rd July 2017.

It will mark the third time this type of fight has taken place in the wrestling company.

The match’s stipulation became revealed when Randy Orton took to the ring for a promo. He had previously lost to Jinder Mahal after a WWE Championship rematch on Money in the Bank, held on 25th June. Not one to give up so easily, he explained to the crowd how he wanted another rematch.

Claiming he deserved it, Randy revealed he wouldn’t leave the ring until he got his desired fight and also made threats to the WWE Champion. Commissioner of Smackdown Live, Shane McMahon, joined the wrestler on stage to agree the rematch would take place.

However, Shane added Jinder Mahal would have the choice of the match’s stipulation. As the WWE Champion arrived with The Singh Brothers, he announced it would be a Punjabi Prison Match.

While the wrestler found it fitting for Battleground, he also gave a nod to The Great Khali, hailing him as a “giant amongst men”. 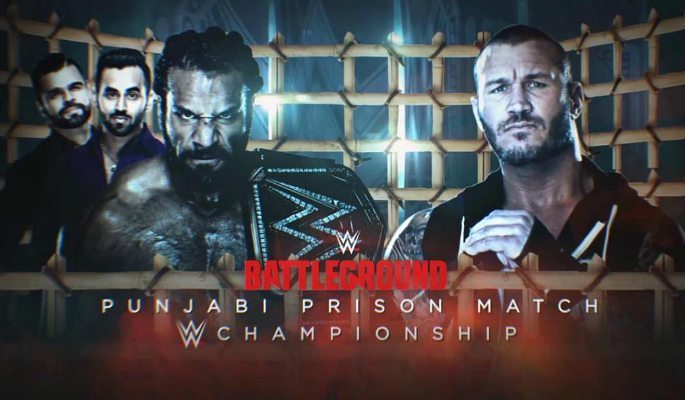 What is a Punjabi Prison Match?

This type of fight has rarely taken place in the WWE, so many will undoubtedly seem unsure of what this Punjabi Prison Match will entail. And what it means for both Jinder Mahal and Randy Orton.

With some similarities to the Hell in A Cell stipulation, this Indian-inspired match contains two cages composed of bamboo. With one standing at 16 feet and another at 20 feet, the only way to win involves escaping both cages.

This means that Jinder Mahal and Randy Orton cannot win by submission, pinfall or even disqualification!

2006 witnessed the first ever Punjabi Prison Match at the Great American Bash. Prior to the match, The Great Khali had invented the stipulation and initially would face the Undertaker in the fight. However, he became replaced by the Big Show.

In the following year, The Great Khali faced Bautista in this match stipulation at pay-per-view event No Mercy. Now after a 10-year hiatus, the Punjabi Prison Match returns.

As Jinder decided on this unique stipulation, it seems he feels confident in winning the match. However, Randy Orton is a seasoned veteran of WWE, meaning he will put up a strong fight.

With all considered, this looks set to become a memorable, thrilling match. As the two have faced each other twice in recent months, fans will now witness a refreshing take on their feud with this Punjabi Prison Match.

Set for 23rd July 2017, at Battleground, you don’t want to miss this high-energy fight!