"just a photo together and everyone is going crazy"

In his latest Instagram post, Asim Riaz, the runner-up of Bigg Boss 13 has hinted at a collaboration with international sensation DJ Snake.

Asim has an extensive fan-following in India after he appeared as a contestant in the 13th season of the reality TV show Bigg Boss.

Asim finished as runner-up, losing out to Siddharth Shukla. The model has since appeared in many music videos.

He has also starred in a few music videos with ladylove Himanshi Khurana, whom he met in the Bigg Boss house.

In March 2020, Asim Riaz had originally declared that he has been in contact with long admired artist DJ Snake’s manager.

Following which actress Jacquline Fernandez had also stoked the rumour fire by posting about the intended collaboration in a now-deleted tweet.

Hence, with such a dedicated follower base in India, Asim’s latest Instagram story of him chilling with DJ Snake in Dubai has resulted in the rumoured collaboration trending on Twitter.

On November 15, 2020, both Asim Riaz and DJ Snake posted each other’s pictures on their Instagram stories fuelling speculations of a potential collaboration.

DJ Snake had wished his Indian fans a happy Diwali on his Instagram and also shared a picture of Asim Riaz.

In the photo, Asim is dressed in black and is holding a drink in his hand. Asim also shared DJ Snake’s clip on his Instagram story. 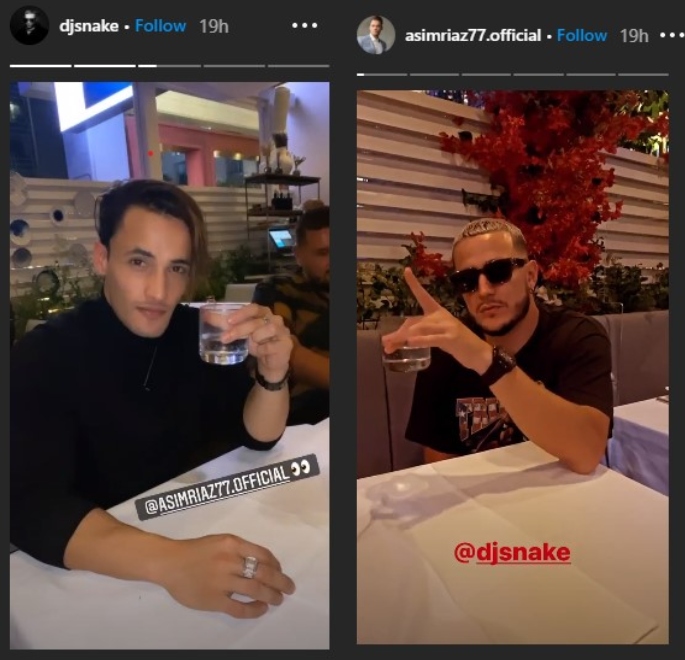 Fans couldn’t keep calm as soon as the pictures went viral on the internet.

“Both Asim Riaz and DJ Snake are trending together, just a photo together and everyone is going crazy for this much-awaited international collaboration.

“Just think when the actual project is released, the craze will be insane and beyond any imagination.”

Finally the most awaited collaboration is happening soon ??

DJ Snake is a Grammy-nominated producer and artist who debuted into the international scene with singles Bird Machine’ and Turn Down for What in 2013.

‘Bird Machine’ is a collaboration with fellow French musician Alesia.

DJ Snake was announced to be working on a collaboration with Diplo, originally slated to debut in 2014. It eventually released in 2015 as the single ‘Lean On’.

The single was released in collaboration with MØ and Diplo’s Major Lazer as well as former Pussycat Doll Melody Thornton.

Akanksha is a media graduate, currently pursuing a postgraduate in Journalism. Her passions include current affairs and trends, TV and films, as well as travelling. Her life motto is 'Better an oops than a what if'.
Pianist Rekesh Chauhan talks Music & Watch Party Series
Sonu Nigam says He doesn’t want Son Neevan to be a Singer