A shisha lounge in Birmingham has been issued a £10,000 fine for hosting an event which breached Covid-19 rules.

“People should not be in groups up at the till.”

A Birmingham shisha lounge has been hit with a £10,000 fine after the owner tried to hide approximately 250 party-goers from the police.

The incident occurred on Wednesday, 30 September 2020 at Kasablanca Shisha Lounge.

Reportedly, the owner told people inside to “be quiet” in order to deter officers who arrived at the scene.

The music was turned off and the shutters closed.

However, officials were not fooled by the ploy and headed inside the shisha lounge.

They discovered almost 250 people without masks and no social distancing in place inside.

There were also large groups gathered at the till. Undoubtedly, this was a huge breach of Covid-19 guidelines.

The scene inside the lounge was captured on the police bodycam footage. In the video, officers told the owner:

“Shutting the shutters down and turning the music off has made no difference, we’ve got it all on camera.

“Every person here should be wearing a mask. You are working behind here, you have a duty to ensure people in here are following the guidelines.

“People should not be in groups up at the till.”

“When I came here, I could hear the music, it’s all recorded. As soon as whoever it is that controls these shutters has seen the police, they’ve shut the shutters.

“I’ve then stood at that door and I’ve heard them turn the music down and tell everyone to be quiet, there’s no point hiding it.”

Police were made aware of the incident after reports of loud music at the venue.

After an investigation by West Midlands Police, the owner of the Kasablanca Shisha Lounge was issued with a £10,000 fine on October 9, 2020.

In fact, this venue was one of two fined by the police.

The second fine was issued at Phoenix Business Park in Walsall. This came after an illegal rave was uncovered in September 2020.

During a patrol, officers noticed various cars and people entering one of the units.

When officers attempted to step inside the shutters were slammed shut.

“This was a really busy weekend for us with people continuing to flout the rules across the force.”

“We are still following our four ‘e’s approach, however, we will enforce these fines when it is obviously people are so blatantly ignoring the restrictions.

“Businesses have a responsibility not only to their customers and their staff but to the wider community and there must be consequences when Covid-19 guidance is simply ignored.

“Everyone has a part to play in reducing the spread of coronavirus and no one is above the law when it comes to that.

“We understand that some of the regulations are confusing and we will be explaining where we find breaches, but if people continually flout these measures, we will not hesitate to take action.”

Another eatery, The Chicken Hut was also found to be serving customers at 10.30 pm.

Officers have stated this premise will also be considered for a fine. 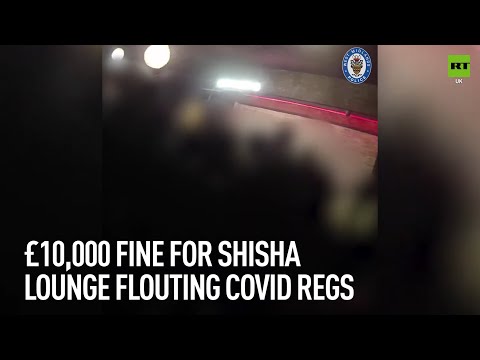