Brad Pitt arrived in Mumbai to promote his upcoming Netflix film, War Machine. He also met up with Bollywood star Shahrukh Khan for a special chat.

"I wouldn't make it in Bollywood, I can't dance"

The actor even met with Bollywood’s very own Shahrukh Khan to chat movies and even the possibility of Brad starring in Bollywood.

The special press conference, hosted by Netflix, took place on 24th May 2017. 53-year-old Brad was in conversation with CNN-News18‘s Entertainment Editor Rajeev Masand about his new war satire, War Machine, which will release exclusively on Netflix on Friday 26th May.

The Hollywood icon was joined by his Bollywood equivalent – Shahrukh Khan, and their chat proved to be a welcome highlight. Their bromance was not easy to miss, and during the course of their conversation, it became clear that they have a lot in common.

Both actors discussed the demise of movie theatres and cinemas in the wake of popular platforms such a Netflix. 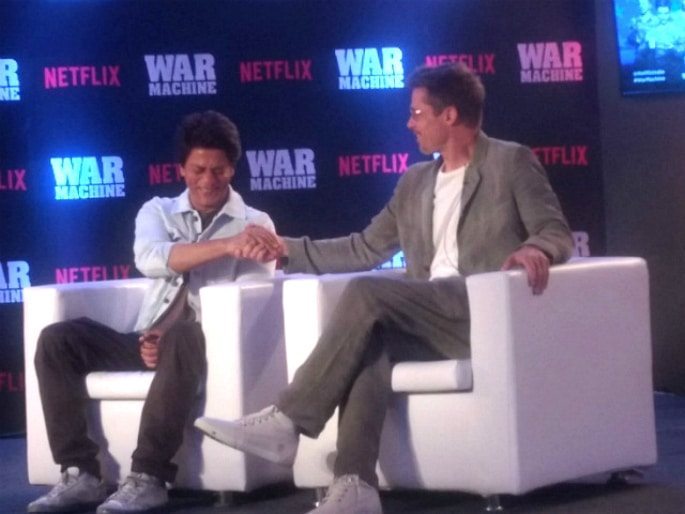 The actors who are now both over 50, also spoke about their own desire to stay relevant in films.

Shahrukh said: “The only thing that keeps us going is the will to survive. There are so many people in commercial cinema trying to protect what they feel is the right thing, but it is not always the thing to protect.”

Brad added: “Often a gamble is where it pays off. We’ve been able to do that without a production company. We have to make time for ourselves, time for family. I’ve been able to compartmentalise my life.”

The conversation swiftly moved on to family as SRK said: “My kids, more often than not don’t like my films. It is not a special thing in the house for Papa’s film to do well. At home, you’re a nobody.” 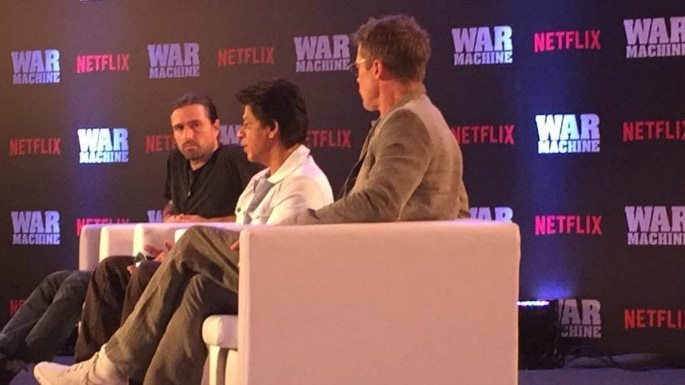 Brad admitted that his choice of film usually came down to a “good script”. Both stars agreed that an exciting filmmaker was also key:

“Putting myself in a good director’s hands. I don’t know about Shahrukh, but I want to surround myself with friends,” Brad said, to which Khan added:

SRK also spoke about whether Bollywood could be overtaken by Hollywood in India: “If we don’t adopt professionalism, technology and screenwriting from Hollywood, the Indian film industry will be in trouble in the next ten-fifteen years. With global streaming services the comparison is side by side.”

And what about Bollywood for the American heartthrob? In one of the more lighter moments of the conversation, Brad admitted to SRK that he couldn’t do a Bollywood film as he can’t dance: “I wouldn’t make it in Bollywood, I can’t dance.”

But the Badshah of Bollywood wasn’t keen on taking ‘no’ for an answer, and offering a quick visual tutorial added:

“Oh, you will, in Bollywood we make everyone dance. I just spread my arms and do nothing, that’s a step.”

Khan also relayed some of his favourite Brad Pitt films, listing The Curious Case Of Benjamin Button as one of them. He added that the 1995 movie, 12 Monkeys was what turned him into a Brad Pitt fan.

It seems that both Shahrukh and Brad had a lot in common, and their informal conversation on film was both rare and insightful. SRK later tweeted his meeting with Brad with a picture:

My best 2 David & Brad for the release of War Machine on @netflix Pleasure to meet u both & Brad the dance remains pic.twitter.com/mxq0GKrqoL

The last time Brad Pitt came to India was with his ex-wife Angelina Jolie:

“This is not my first time in India. We shot A Mighty Heart here. I got to put a helmet on and roam around on an Enfield. I try to reinvent constantly. And fortunately, we were about to survive our mistakes,” Brad says.

His arrival to Mumbai has been pretty incognito so far. He visits alongside War Machine director David Michod as well as the film’s producer Dede Gardner.

It is thought that Brad Pitt will make a quick appearance at a screening of the film in Mumbai ahead of its worldwide release on Friday 26th May 2017.