Pros and Cons of the Apple Watch

After months of speculation and rumours on several tech sites, is the Apple Watch really as good as we thought it would be? DESIblitz is here to take you through the pros and cons of Apple’s first wearable device.

"Apple are thinking for more than one type of customer."

The unveiling of the Apple Watch on September 9, 2014 created a frenzy among Apple fans all over the world, but is it all that it is cracked up to be?

To go with our iPhone 6 article, DESIblitz is here to give you our lowdown on Apple’s new smartwatch and see how it stacks up with what is currently available on the market.

We take a look at the Apple Watch’s positives and drawbacks, that are inevitable with any first attempt at a new piece of tech, and also consider what Apple and tech lovers have to say.

Users will be able to see what they have on their watch on their iPhone, with seamless transition between the two devices.

You will be able to see the subject of the e-mail on your watch and fire up your iPhone or iPad and access the body of that email waiting for you. Perfect for Apple fans that already have an iPhone or iPad! 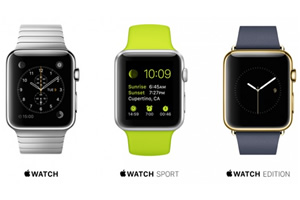 One of the most important distinctions between the Apple Watch and other smartwatches is that Apple will provide users with 3 different watches rather than just one.

The watch will be available in 3 different models, a stainless steel silver or black with sapphire crystals known as an Apple Watch.

The second is the Apple Watch Sport with aluminium cases in silver or grey. Finally there is an Apple Watch Edition made with 18-carat gold cases in yellow or rose. Each design helps show the high quality designs Apple are accustomed to.

Smartwatch users will not be bound to having just a one size fits all watch like the Galaxy Gear. Apple has thought about its consumers and their varying wrist sizes.

The watch will be available in two sizes; small and large. Arun, an Apple fan said: “Apple are thinking for more than one type of customer, this is a great practical move by them.”

With their new fitness app, users will be able to track all their movements on a daily basis.

Over time the watch will gain a better understanding of the wearer and will suggest exercises routines to improve fitness and lead a healthier life.

Apple will also be releasing their new watch with 6 different straps, giving users the chance to stand out from the crowd and pick a design that suits them best.

Straps will range from a classic stainless steel link bracelet, a fashionable sports band for people who are on the move and will complement well with gym wear, a leather loop band, two buckled bands and an intricately designed Milanese band. Aman, an Apple fan says:

“I love the ingenuity by Apple; the idea to have different strap designs is great!”

With the likes of Samsung and Sony having already released their watches and establishing themselves on the smartwatch market, there are many other options available for people looking for a smartwatch.

Apple’s watches will not be released until early 2015, could the wait prove too much for smartwatch fans, even loyal Apple ones?

With the release of the iPhone 6 Plus on September 19, 2014, Apple have decided to enter the phablet market along with their competitors.

There is a feeling of Apple following suit with their smartwatches also. Dalvir, a tech lover says: “Apple has existing problems that they should fix instead of coming out with another gadget!”

Could they just be jumping on the bandwagon of their competitors?

Have Apple already priced themselves out of the smartwatch market before they have even released them?

This is both positive and negative, the watch will need the iPhone by its side for it to be fully functional.

It must be synchronised with a handset and can not be used independently of an iPhone, if you want to buy an Apple watch, you also need an iPhone. Cue more spending.

While the watch will give you the feel of having an iPhone on your wrist, the small screen may prove certain actions difficult. This includes reading text while on the browser, like messages or tweets. Perhaps some things may be best left on a handset rather than a watch.

Apple’s watch range promises many things for the consumer along with drawbacks, the pros and cons touched upon here help show a mix of the good and bad and what to expect upon release.

It will be interesting to see how its release will affect the smartwatch market and what the watch will mean for Apple’s competitors.

One thing we can count on is that it looks like 2015 is already shaping up to be an interesting year for tech and gadget lovers.

Amarjit is a 1st class English Language graduate who enjoys gaming, football, travelling and flexing his creative muscles writing comedy sketches and scripts. His motto is “It’s never too late to be who you might have been” by George Eliot.
The 10 Most Expensive Cars of 2014
FIFA 15 ~ Feel The Game