Priyanka Chopra celebrates Bachelorette in Amsterdam alongside her gal pals. The actress will be marrying US singer Nick Jonas in December.

Bollywood Actress Priyanka Chopra is busy celebrating her bachelorette in Amsterdam alongside her gal pals.

The star looks as though she is having the time of her life, revelling in the joy of being the woman of the hour.

She is all set to marry US singer Nick Jonas in December 2018, with the celebrations in full swing.

Priyanka has been allowing fans glimpses into her fun bachelorette on Instagram.

Posting a picture of herself gleaming with happiness, she captioned it as #BacheloretteVibes.

Chopra’s mother-in-law Denise Jonas commenting on the picture told the star to ‘Be good’ with a red love heart.

The actress put up a picture with her guests, including Game of Thrones actress and future sister-in-law Sophie Turner.

Priyanka was also seen wearing a ‘Bride to be’ sash and a ‘I’m single tonight’ headband, which went well with her colourful ensemble.

Clearly enjoying the spotlight being on her she wrote alongside the post: “A day in the life of… #bachelorette.”

In a funny insight into the crazy celebrations, Chopra kept her fans on their toes with posts on her Instagram story. 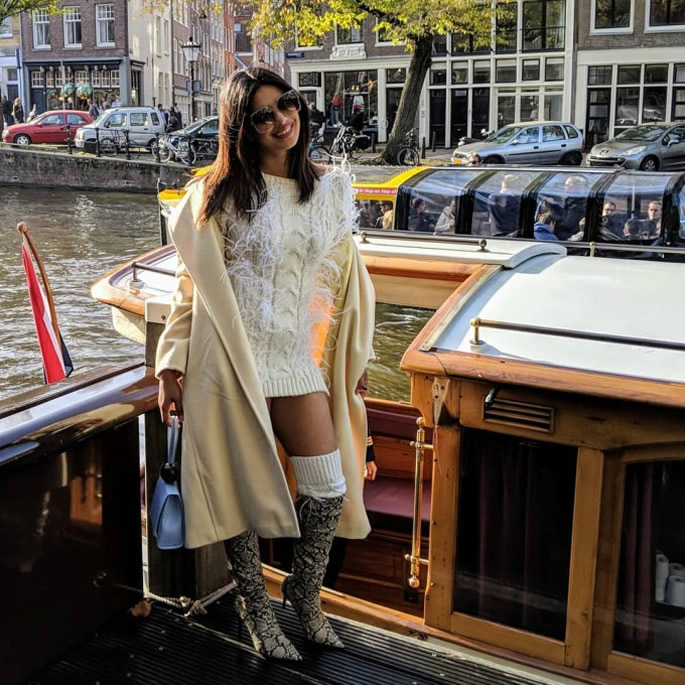 She can be heard saying: “This is what you have to do for sister in-laws these days.”

Chopra captions the video as ‘#HighHeelFails’ and affectionately calling herself and Sophie as ‘The J Sisters’.

The Namaste England (2018) star posted her arrival in Amsterdam on her Instagram story.

She write: “Amsterdam!!! Time for PCBachelorette.”

As well as this, she posted a boomerang on her Instagram story of Chopra ready for a fun-filled evening.

Priyanka can be seen wearing a white dress with silver embroidery, with a trail emblazoned with feathers.

Before her Bachelorette, Priyanka was thrown a Bridal Shower in New York by her friends.

Other guests who did attend were Sonali Bendre and Neetu Kapoor.

The actress wore a white Marchesa dress with feather ruffles, and was beaming from ear to ear.

Nick and Priyanka are reportedly marrying in a three-day ceremony from November 30th to December 2nd 2018.

The ceremony will apparently be held in Jodhpur, India in front of family and friends.

Chopra is not the only Bollywood star who will be tying the knot.

It looks as though Priyanka will be unable to make her co-stars wedding if given an invitationon, due to her own upcoming nuptials.

On the work front, Priyanka has just finished shooting the first schedule of The Sky is Pink. The film also stars Farhan Akhtar and Zaira Wasim. Portions of the film were shot in London.

The International Star also has Hollywood film Isn’t it Romantic? releasing in 2019.

But before all of that, Priyanka of course has her wedding to look forward to. We can’t wait to see Priyanka Chopra as a bride!

Hamaiz is an English Language and Journalism graduate. He likes to travel, watch films and read books. His life motto is “What you seek is seeking you”.
11 Unique Bollywood Films to Watch on Netflix
Badhaai Ho for ‘Badhaai Ho’as they Join the 100 Crores Club