‘Desi Girl’ Priyanka Chopra is rising to success with her international career. From Bollywood to Hollywood, DESIblitz reflects on PeeCee’s filmy journey!

"I have seen her on Quantico. I think she is great, she is fantastic"

Priyanka Chopra, the girl born and bred in Jharkhand, is now an international icon.

Notably, PeeCee has been involved in 59 films, four of which are Indian Regional films (some scheduled for release). Whilst, the other two are big Hollywood productions.

Additionally, she is the first South-Asian woman to play the leading role in the American series, Quantico. Moreover, she has been appointed as Unicef’s newest global Goodwill Ambassador.

We must congratulate PeeCee for winning ‘Favourite Dramatic TV Actress’ for the series, Quantico at the 2017 People’s Choice Awards. Overwhelmed, the actress says: “It’s the concussion talking. But thank you so much—this means the world to me. Thank you.”

It seems like there is no end to Priyanka’s success!

From Career Goals of Engineering to becoming Miss World 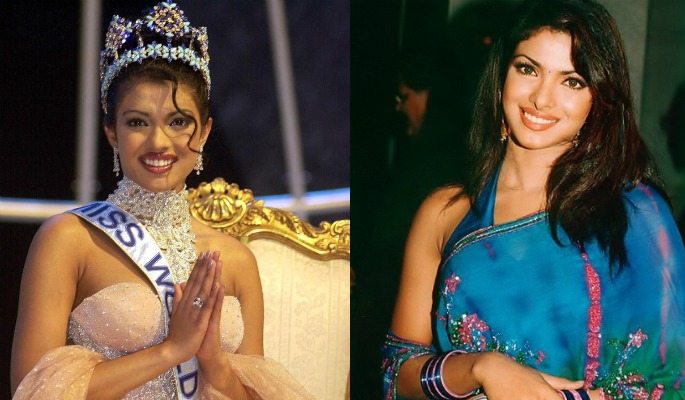 What do you remember doing at the age of 12? Playing games, going shopping with friends? Well, at that age, PeeCee moved to America, to pursue her studies, living with her uncle and aunt in Newton.

Whilst this was brave and adventurous, blending in became Chopra’s worst nightmare. During her teen years, she was subjected to racial abuse and bullied by a first-year student, named Jeanine:

“She was black and supremely racist. Jeanine used to say, ‘Brownie, go back to your country, you smell of curry’, or ‘Do you smell curry coming?’

“You know when you’re a kid, and you’re made to feel bad about where your roots are, or what you look like? You don’t understand it, you just feel bad about who you are,” says the 34-year-old actress.

As it became too much to handle, Chopra returned back to India. At this point, she became determined to become an Engineer. However, it seems like fate had other plans.

As she applied for a scholarship, her mother sent professional photographs to the ‘Miss India’ pageant, without informing Priyanka. With a stroke of luck, she ended up winning the contest.

Subsequently, she went to the Miss World 2000 pageant in London, also gaining victory.

Her film career began with the 2002 Tamil political drama, Thamizhan, opposite the megastar, Vijay. Priyanka Chopra made her Bollywood debut with Anil Sharma’s,

Priyanka Chopra made her Bollywood debut with Anil Sharma’s, The Hero – Love Story of a Spy (2003). Here, she performed the role of Dr Shaheen Zakaria. Whilst the film had a below-average verdict at the box-office, Chopra’s performance was highly praised. In addition, she also won the Stardust Best Supporting Actress Award.

Raj Kanwar’s Andaaz is what broke the ice. Her performance as the vivacious and fun-loving Jiya won the hearts of many critics. As a result, it got her several awards at the Filmfare, Screen, IIFA and Zee Cine Awards.

We witnessed wild yet pristine roles very early in her career, especially in films like Mujhse Shaadi Karogi (2004). However, for Abbas-Mustan’s Aitraaz (2004), PeeCee went all out for her character. Taran Adarsh writes:

“Priyanka gets an opportunity to bear her claws and she does it with a complete understanding of the character. She sneaks her way through the role like an expert, drawing audience hatred the way a magnet collects iron filings.”

Fashion (2008) can be classed as one of Priyanka’s biggest films. PC won the ‘Best Actress’ award at several reputable ceremonies, including Filmfare and National Award. In fact, Rajeev Masand writes:

“Chopra turns a respectable performance, one that will inevitably go down as her best. The truth is, it’s one of those by-the-book characters that she understands only too well and performs just as easily.”

In particular, What’s Your Raashee (2009) was also an unsuccessful movie. Yet, she played 12 characters in this one film, that too, with utmost perfection. We still wonder why her name hasn’t been mentioned in the Guinness World Records Book!

The highlight of PeeCee’s Bollywood career was during 2010. In Vishal Bharadwaj’s 7 Khoon Maaf (2011), she performs the femme fatale, Susanne Anna-Marie Johannes. In which, she murders her seven husbands in an unending pursuit of love. Yet again, she won the hearts of many critics.

After 7 Khoon Maaf, Barfi (2012) became another benchmark film for Priyanka Chopra. Since it was India’s official entry for the Best Foreign Language Film nomination, for the 85th Academy Awards.

Indeed, her portrayal of the autistic girl in Barfi was touching and poignant. With PeeCee again winning several awards.

Indo-Asian News Service praises: “We don’t see the actress on screen at all! We see only Jhilmil who reminds us in a very pleasant way of Sridevi in Sadma. This is one of the most flawless interpretations of a physical-psychological disability seen on celluloid.”

Depicting the roles of Jhilmil and Susanna was rewarding. With the next big performance, Priyanka Chopra packs a punch (almost literally!) for the depiction of the highly renowned boxer, Mary Kom (2014). In preparation for the role, PeeCee went on a low-carb, high-protein diet, and training for boxing. However, the filming began at the toughest point in Chopra’s life:

“I started this film at the hardest point in my life, four days after my father passed away. All my grief, everything, I have shoved into this movie. A part of my soul has gone into it.”

The 2015 epic drama, shows Priyanka Chopra in a royal avatar while playing Kashibai in Bajirao Mastani. Her performance alongside co-stars, Ranveer Singh and Deepika Padukone, were highly praised.

It would not be wrong to say that Priyanka Chopra’s first step onto international platform was through her singles, ‘In My City,’ collaborated with Will.i.am. And, ‘Exotic,’ with Pitbull, which became successful.

Her voiceover as ‘Ishani’ in the Disney animation, Planes,  proved that Priyanka Chopra can mould into every avatar. The movie went on to gross $239.3 million worldwide, on its $50 million budget.

Now, our ‘Desi Girl’ Priyanka Chopra has a new identity. She is the most-wanted FBI agent, Alex Parrish, in the series Quantico, which is currently running its second season.

In addition to its decent viewership and positive reception, PeeCee has gone on to several successful American chat shows. These include The Ellen DeGeneres Show and Jimmy Kimmel Live. Her cool, enthusiastic, and sincere demeanour, on such reputed chat-shows, has certainly made her the talk-of-the-town.

In fact, Chopra is constantly praised by fellow celebrities, across the US.

Conrad Ricamora, who plays the character Oliver Hampton in the hit series, How To Get Away With Murder, mentions:

It is strongly believed that Priyanka Chopra will win more hearts playing the character ‘Victoria Leeds’ in Baywatch. Talking about her character, the Quantico actress explains:

“I play the bitchiest, badass bombshell of a villain in the movie.” Furthermore, it seems like PeeCee is certain that her co-stars, Dwayne Johnson and Zac Efron, will entertain viewers. She adds:

“Just picture them (Efron and Johnson) together. Isn’t that just funny looking at them together? That in itself is fun, now imagine that in slow motion. It’s a great great movie. It doesn’t take itself seriously.”

DESIblitz wishes Priyanka Chopra all the best for Baywatch and forthcoming projects.